Polls must not delay subsidy for drivers – senators 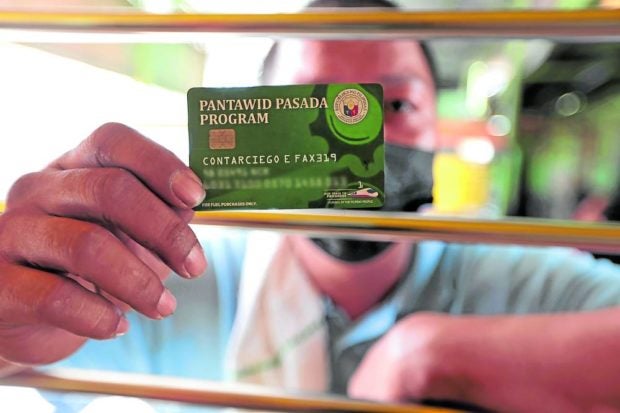 LIFELINE A jeepney driver shows his “Pantawid Pasada Program” card while waiting for passengers at a transport terminal on Visayas Avenue in Quezon City in this photo taken on March 16. —GRIG C. MONTEGRANDE

MANILA, Philippines — Drivers and operators of buses, jeepneys, and tricycles cannot afford to wait until the end of the May elections to receive fuel subsidies from the government, Sen. Grace Poe said on Monday as she lamented the suspension of the financial assistance due to the public spending ban of the Commission on Elections (Comelec).

“We cannot tell our people to hold on for relief until the elections are over. Hunger simply cannot wait,” the chair of the Senate public services committee said in a statement.

The ban on election spending is in effect from March 25 until May 8, the eve of Election Day.

Poe called on the Comelec to act swiftly on the appeal of the Land Transportation Franchising and Regulatory Board (LTFRB) for an exemption to allow the agency to resume distribution of cash aid to PUV (public utility vehicle) drivers and operators.

“Since the release of the P3-billion fund, not even half of the identified 377,000 beneficiaries received the assistance, which was handed out only for 10 days before the election ban took effect on March 25,” she said.

The LTFRB on Monday said it had given subsidies to 110,287 drivers hit by the fuel price crisis.

In March, the LTFRB started distributing P6,500 in fuel aid to some 264,578 qualified PUV drivers to help them cope with runaway fuel price hikes exacerbated by the ongoing Ukraine-Russia conflict.

At least 67,447 applications for subsidies are still being reviewed by the board, including those filed by 22,932 taxi drivers.

According to LTFRB Executive Director Tina Cassion, they have yet to receive a list of beneficiaries from the Department of the Interior and Local Government regarding tricycle drivers who are qualified for the program.

“Our PUV drivers and operators have waited long for the cash aid that we have funded in the annual budget to bring succor to our people in times of distress,” she said.

On Monday, the Comelec said it would announce on Thursday whether it would exempt the government’s fuel subsidy program for PUV drivers and operators from the election ban on public spending.

The poll body took up the LTFRB’s request during its weekly policy meeting on March 30 and required the agency to submit documents to justify exempting the fuel subsidy program from the election ban on public spending.

“This is undergoing study and by Wednesday (April 6) a recommendation will be submitted to the en banc (policy body),” Comelec Commissioner George Garcia said on Monday.

“You can expect by Thursday (April 7), we will announce Comelec’s action on LTFRB’s request,” he said.

In a statement, Cassion said the LTFRB had already “presented justification on its application for exemption… amid the pressing need to complete the distribution of payouts amid high prices of fuel while assuring the poll body that said distribution will not be used for political gains.”

The board is also working on the production of at least 86,000 cards and other preparations for the remaining payables, she added.

Earlier, the Comelec exempted the Office of the Vice President’s pandemic relief projects from the election spending ban.

The poll body last week also exempted certain projects of the Department of Social Welfare and Development, the Office of the Presidential Adviser on Peace, Reconciliation and Unity, and the provincial government of Davao de Oro.

Meanwhile, motorists got a reprieve this week as oil companies on Tuesday slightly decreased pump prices of petroleum products, a week after implementing a big-time hike.

Prices of gasoline and diesel were cut by P2.30 and P1.85 a liter, respectively, while the cost of kerosene fell by P1.65 a liter.

This would be the second time this year that oil companies rolled back fuel prices. Prior to this week’s adjustment, diesel and gasoline prices had gone up by P27.85 and P18.30 a liter, respectively.

On the global scene, analysts said concerns over tight supply due to the Russia-Ukraine crisis and the Iran nuclear deal continued to linger despite some countries’ decision to draw oil from their strategic petroleum reserves.

US President Joe Biden has authorized the release of more than 180 million barrels of oil from the country’s emergency oil reserve for the next six months. Member countries of the International Energy Agency followed suit.

The price of Dubai crude—the Asian bellwether—remained at $110.89 a barrel as of Monday.

As oil prices remain high, the government has been asked to ease the impact of rising fuel prices on the country’s agriculture sector by suspending the imposition of the excise on oil.

Rosanna Contreras, president of Soccsksargen Federation of Fishing and Allied Industries Inc., on Monday pushed for the suspension of the excise on petroleum products to ease the burden of consecutive oil price hikes on fishermen. Fuel accounts for 60 to 70 percent of the total fishing cost.

“What the industry is asking for is to cancel or lower the tax for three to four months to help us cope with rising fuel costs,” he added.