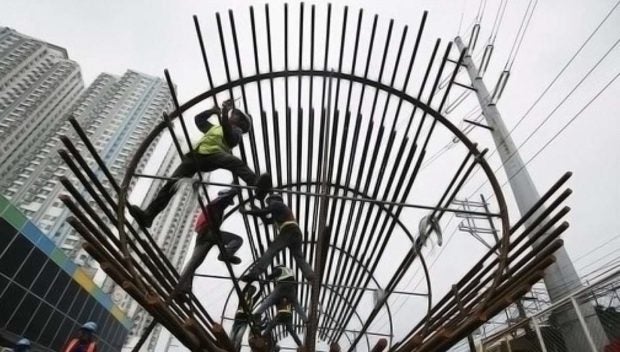 Pantheon Macroeconomics, an economic research consultancy based in the UK, has recently reported that the Duterte administration has failed to achieve its ambitious spending targets despite having rolled out more infrastructure projects under the BBB program.

In this article, INQUIRER.net will detail the think tank’s observations, especially its impact on the next administration after the May 9 elections.

The increase in infrastructure disbursements occurred as more road, airport, and railway projects were rolled out when the economy further reopened from the most stringent COVID-19 lockdowns in 2020.

According to the Department of Budget and Management (DBM), the total amount spent on infrastructure last year exceeded by a tenth the Development Budget Coordination Committee’s P1.02-trillion program, equivalent to 5.6 percent of GDP.

Yet Chanco noted that the administration has failed to meet its spending targets.

“Spending has risen to about 4.5 percent of GDP as of 2021, from the roughly 3-percent level at the end of the term of the late ex-president Benigno Aquino, but it’s still miles from the 7-percent target to be reached this year,” Chanco said.

Data from the DBM released late in March showed that the total infrastructure disbursements in 2021—which included projects implemented by the national government, as well as infrastructure-related transfers to local governments plus subsidies and equity injected into state-run corporations —climbed by 29.2 percent from P869.9 billion in 2020 or 4.8 percent of GDP.

Prior to the pandemic, infrastructure spending already breached the P1-trillion mark with P1.05 trillion—or 5.4 percent of GDP—disbursed in 2019. 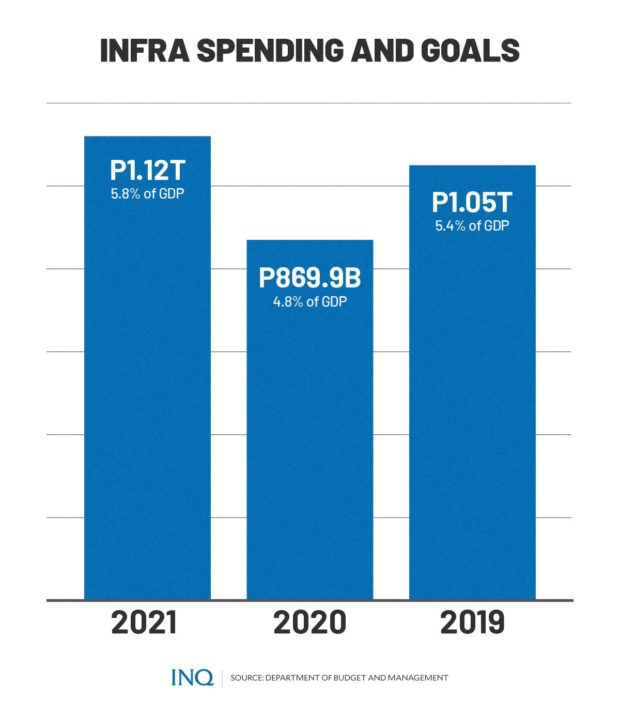 “COVID-19 was a huge setback, but it isn’t directly to blame for the job half-done. Indeed, infrastructure spending as a percentage of GDP was starting to plateau before the pandemic hit,” Chanco said, as implementing agencies struggled to spend their bigger budgets on publicly financed projects due to capacity constraints.

In July last year, Duterte’s economic team has jacked up the disbursements of yearly infrastructure programs for 2022 to 2024.

DBCC announced that it has raised the infrastructure budget for 2022 to P1.29 trillion—or 5.8 percent of GDP—from P1.25 trillion or 5.7 percent of GDP.

This will allow the share of infrastructure spending to GDP to average 5.4 percent from 2022 to 2024, the DBCC said.

Challenges for the next president

While the current administration has urged whoever will be elected as the new president to continue and maintain the BBB program, Chanco said fiscal consolidation might make it harder to do so for the next administration.

“Fiscal consolidation probably will be job No. 1 for whoever next occupies Malacañang Palace,” Chanco said.

“The Philippines suffered one of the biggest budget blowouts in emerging Asia in 2020, with the deficit ballooning to 7.6 percent of GDP. More disconcertingly — and unlike most of its neighbors — no progress was made in closing this gap last year, in spite of the rebound in economic growth, with the deficit widening to 8.6 percent,” Chanco noted. 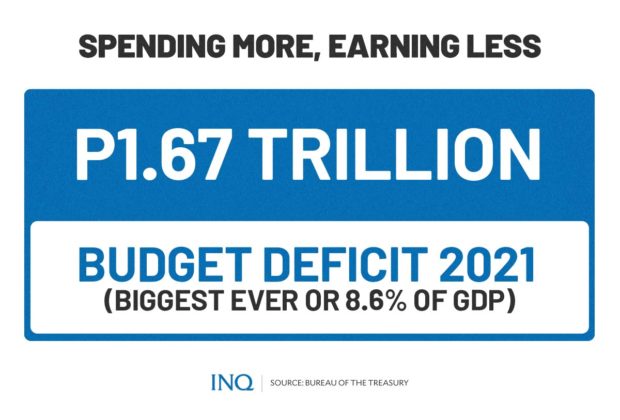 By end of 2021, the government saw its biggest-ever budget deficit amounting to P1.67 trillion, inflicted by huge public expenditures to fight the prolonged pandemic amid weak revenue collections.

Last year’s budget deficit was equivalent to 8.6 percent of GDP and was higher than P1.37T in 2020 or 7.7 percent of GDP. Still, experts noted that it was still below the 9.3 percent program or the P1.9T ceiling.

Moreover, the next administration will have to address the increasing outstanding debt of the government, which as of January has reached a new high of P12.03 trillion. 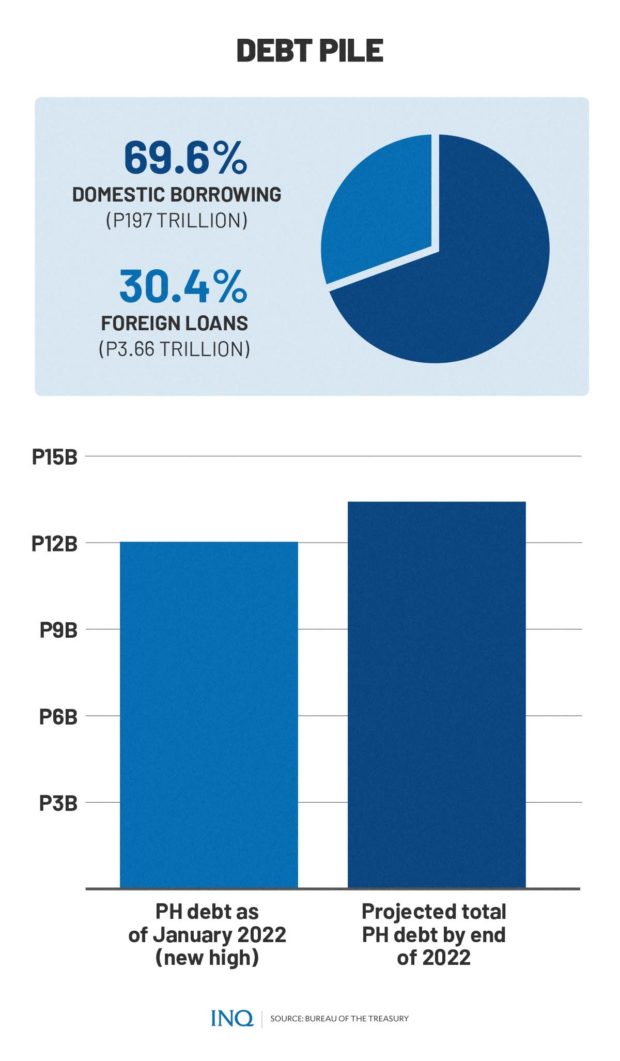 According to the Bureau of the Treasury (BTr), around 69.6 percent of the debt pile came from domestic borrowings worth P197 trillion. The other P3.66 trillion or 30.4 percent was from foreign sources. 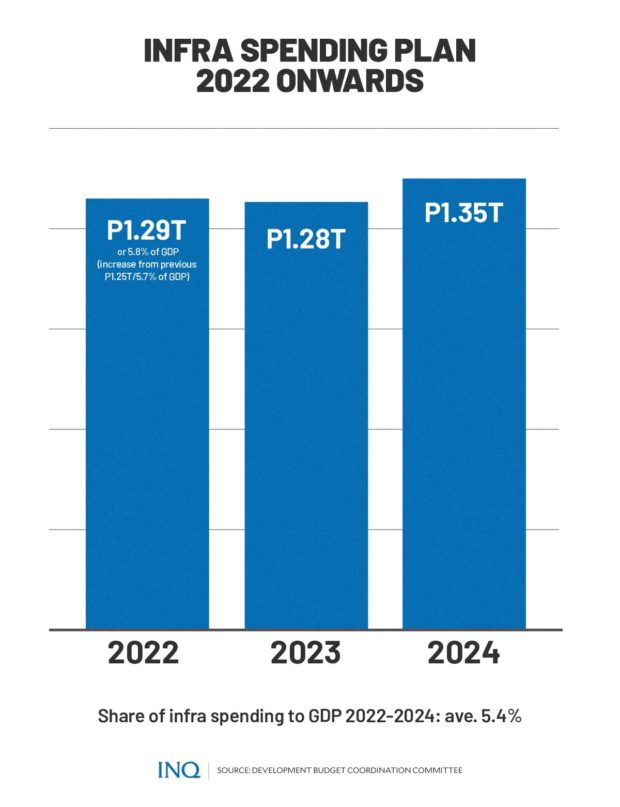 In terms of the BBB program, the National Economic and Development Authority (Neda) said last year that the current administration is expected to complete at least 18 big-ticket flagship infrastructure programs worth P235.9 billion by mid-2022 or until the end of Duterte’s term.

It should be noted, however, that the country’s continuously ballooning debt would eventually be handled by the next administration—but more importantly, will be paid by Filipinos in the coming years

READ: Piling PH debt: When is it a cause for worry?

To aid the country’s growing needs amid the ongoing COVID-19 pandemic, the government had to source funds from foreign borrowings and grants for the pandemic response budget.

Last year, presidential candidate Sen. Panfilo Lacson said debt servicing, as a result of the loans acquired during Duterte’s administration and the pandemic, will be among the challenges for the next administration

READ: Trillions and counting: The mountain of debt next president has to climb

Socioeconomic Planning Undersecretary Jonathan Uy said that four projects worth P119.8 billion are expected to be completed by June 2022.

Uy added that the bigger chunk of the 112 BBB infrastructure projects in the government’s P4.7-trillion pipeline will be finished after Duterte’s tenure. 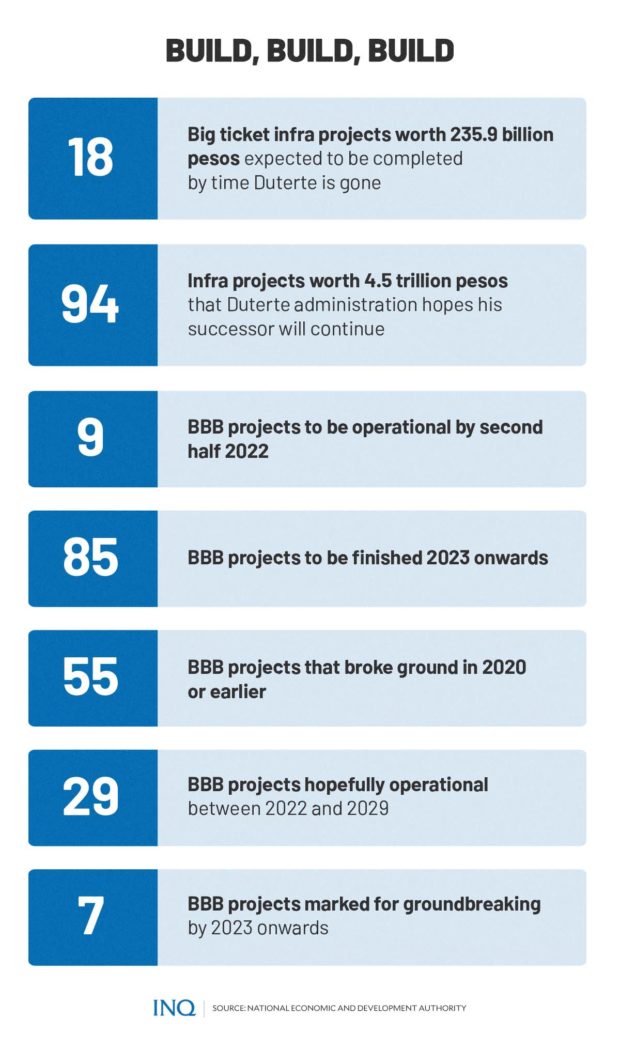 At least nine of these remaining projects will begin operations in the second half of 2022, while 85 are expected to be done by 2023 onwards.

Uy said 55 of these infrastructure flagship projects broke ground in 2020 or earlier, on top of 21 this year. The government was eyeing groundbreaking for 29 projects next year and seven from 2023 onwards.

In a debate hosted by the Commission on Elections (Comelec) last month, nine presidential candidates were asked if they believe that the BBB program was a success and if they would continue it if they get elected as president.

Robredo said if elected as the next president, she will continue the initiative but with more emphasis on public and private partnership (PPP) and with priority on rural development, transportation, water resource management, and climate-resilient infrastructure

“We will continue the Build, Build, Build, but we will provide emphasis on PPP instead of ODA (official development assistance). But for PPP to succeed, we should fix our government so that more investors will trust us,” she said.

Lacson said the public should be the one to judge whether the BBB program of Duterte was successful.

“On the question if it is successful, out of the 118 projects, only 12 were accomplished. So you should be the one to judge. The people should judge if it is successful. Will I continue it? Yes. But let’s make it better, let us boost it more, and make it bolder,” said Lacson.

“The problem is our debt has reached P12.03 trillion, both foreign and domestic. So maybe it is time to shift from BBB to PPP where the government will not spend and it will be a private initiative. There are many large corporations willing to participate in nation-building, especially in infrastructure,” he added.

Pacquiao said the infrastructure program was a good project. He vowed to expand his housing project nationwide, as he emphasized the need to develop the Mindanao area.

“That (BBB) is really a good project because it is involved in economic growth and development. Second, we will continue the housing project nationwide. If I become president, I will implement this program nationwide,” the boxing icon said.

“Yes, Build, Build, Build was successful. It’s just that we had a pandemic. Will I continue it? Yes, but we will build more houses, better schools, more hospitals, more post-harvest facilities for the fisherfolk and farmers, and more sources of energy for stability in the Philippines.”

Abella echoed the same sentiments, adding that he will continue the program while aiming to “push it beyond just building infrastructure.”

“I will continue that and push it beyond just building infrastructure but we’d also like to build, build, build the next generation, especially through education of the youth and emphasizing science, technology, engineering, and math, so that we will have a more innovative generation,” Abella said.

“[H]aving more innovation, it would lead to more research and development, building a strong economy,” he added.

Mangondato, like other candidates, also vowed to continue BBB.

Montemayor said the program should be continued because of the “inviolability and sanctity” of contracts.

However, he stressed that the government should ensure that funds for infrastructure projects are not lost to corruption.

“Let us remember that these funds are loans. Now, we should ensure that these are being used properly. Number two, we should not just think of loans. We should also look if this is being lost to corruption,” he said.

“Let us monitor it well because this is a good and extensive project, but it will not have value if these loans are just lost to corruption,” he continued.

De Guzman answered that the Duterte administration’s cornerstone program has achieved some goals, but it has further increased the country’s already piling debt.

“What a worthless government! The basic needs of the people are not being met. That’s how I perceive this Build, Build, Build program.”