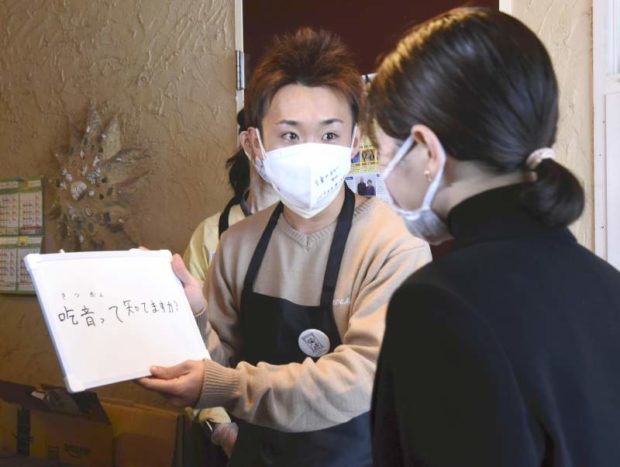 A worker with a stammer serves a customer at a cafe in Setagaya Ward, Tokyo, on March 20. The Yomiuri Shimbun

TOKYO — The very name of a pop-up cafe that operated for a single day in Tokyo last month signaled that there was something special about it. “Chyumon ni Jikan ga Kakaru Kafe” literally means “a cafe where it takes time to order.”

The one-day establishment was part of an initiative to provide young people who stutter with an opportunity to serve customers. It also aimed to increase public understanding of the speech disorder in a warm and relaxed setting.

The organizer also plans to set up such places outside Tokyo.

Shunsuke Yoshida, who worked as a staff member, quizzed customers about stuttering while they were waiting for the drinks they ordered at the cafe in Setagaya Ward, Tokyo, on March 20.

“When a person with a stammer takes time to speak, the best thing to do is to wait for them to finish speaking,” he said in giving an answer to the quiz.

Yoshida, a university student from Inzai, Chiba Prefecture, communicated with customers proactively, wearing a mask decorated with the message, “Please bear with me. I like talking.”

Yoshida, 20, was interested in a part-time job of serving customers, but suffered a blow to his confidence after being laughed at when he had difficulty at school in reading aloud and responding during roll call. He learned about the cafe project via social media and decided to participate.

“Customers accepted my stuttering, and that gave me confidence that I can serve customers,” Yoshida said.

Four people tried their hand at serving customers at the cafe on that day. They gave the customers some coaching, with one saying, “Please wait until I finish speaking without interrupting or guessing what I’m going to say.” To promote understanding of stuttering, they also handed out flyers that listed problems they encountered and responses that helped them.

Cafe visitors included Seiji Oba, a then 11-year-old elementary school student from Saitama City who also stutters. “I was encouraged to see people who stammer serve customers with a positive attitude,” he said.

The cafe project was organized by Arisa Okumura, 30, of Meguro Ward, Tokyo, who herself speaks with a stammer. She received treatment in Australia, her husband’s home country. After returning to Japan, Okumura started posting information on social media about training to control her stuttering, and that connected her with young people who had a similar condition and wanted to serve customers but were unable to do so due to lack of public understanding of stuttering.

Because of her stutter, Okumura had once given up on working at a cafe. However, during her stay in Australia, she had a chance to serve customers at a cafe friendly to people with disabilities.

In light of that experience, Okumura thought that those with a stammer could try to serve customers in such an environment. She then made plans to set up a similar cafe, which would offer visitors drinks for free. Okumura raised money through crowdfunding, and the cafe event was first held in Tokyo last August. After that, she received requests from people who wanted to serve customers, and she decided to hold the event again.

According to the Japan Society of Stuttering and Other Fluency Disorders, one out of every 100 adults is said to stutter.

“Some people are afraid to speak for fear of discrimination and prejudice,” Okumura said. “At the cafe, I want people to learn about what those [with a stammer] hope for. I want young people who stutter to develop courage by taking on the challenge.”