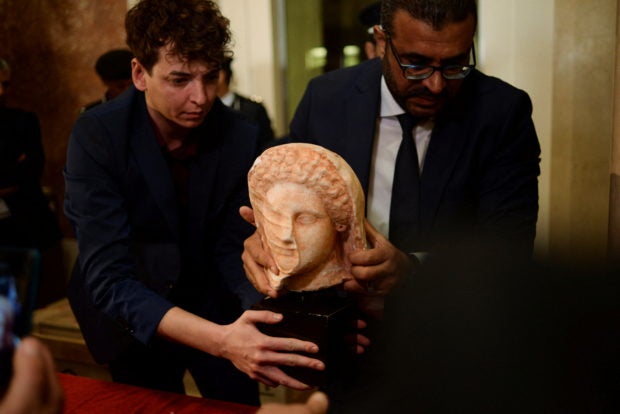 The Libyan Antiquities Authority holds a ceremony for the repatriation of the artifacts returned by the US Department of Homeland Security, including the marble antiquity of “The Veiled Head of a Lady” and other looted artifacts at the Royal Palace in Tripoli, Libya, March 31, 2022. REUTERS/Nada Harib

TRIPOLI — Libyan authorities said on Thursday they had received nine ancient artifacts including funerary stone heads, urns, and pottery that were returned by the United States after being smuggled out of the North African country.

All the pieces had been illegally excavated and shipped to the United States, but they were identified by archaeologists working with the Manhattan District Attorney’s office in New York and have been returned to the Museum of Libya in Tripoli.

“They were not stolen from museums and were not recorded with us,” said Libyan government antiquities department head Muhammad Faraj Muhammad.

“But because they are of a distinctive style, the retrieval process was rather simple,” he added.

The grandest pieces returned to Libya were the four funerary heads, marble busts including one whose sculptor had added a delicate stone veil that seemed to flow across the face.

The pottery included patterned jars. All the pieces are now in the museum located in the central Tripoli palace of King Idris, who was ousted in 1969, and which has been closed to the public since the 2011 uprising.

Once a major province of the Roman Empire and home to spectacular coastal ruins, Libya has a wealth of archaeological sites and its museums boasted an array of ancient treasures.

However, during the years of chaos that have followed the 2011 NATO-backed uprising some of its museums were looted and numerous sites were pillaged by treasure hunters digging in the ground.

After major antiquities looting following the U.S.-led invasion of Iraq in 2003, and in Syria during the war after its own 2011 uprising, militant groups raised money by trading in antiquities, drawing greater involvement from the police.

“The process to return cultural antiquities is incredibly complex. It requires massive partnership. In this case, there was a partnership with the U.S. authorities,” said Antonia Marie de Meo, the director of the U.N.’s interregional crime and justice research institute.