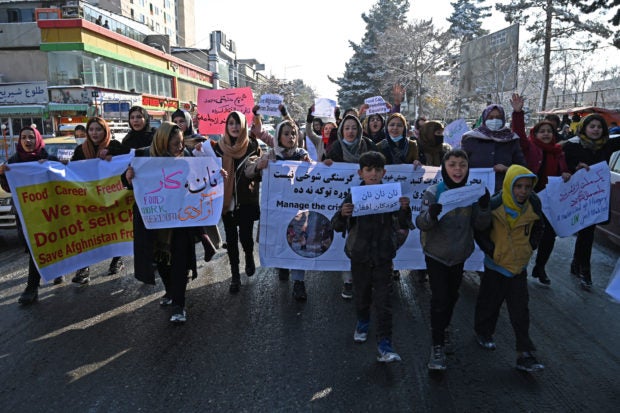 Women chant slogans and hold placards during a protest demanding for equal rights, along a road in Kabul on December 16, 2021. AFP

PARIS — Nearly half of all pregnancies worldwide are unintended, the UN reproductive health agency said Wednesday, warning that the war in Ukraine could further exacerbate what it called a “human rights crisis”.

Out of 121 million unintended pregnancies every year — 331,000 a day — more than 60 percent end in abortion, almost half of them unsafe, the United Nations Population Fund said in a new report.

The UNFPA said the report was not about “unwanted babies or happy accidents”, but how a combination of gender inequality, poverty, sexual violence, and lack of access to contraception and abortion robbed women of “the most life-altering reproductive choice — whether or not to become pregnant”.

The war in Ukraine and other conflicts are expected to drive the “staggering” number of unintended pregnancies even higher as sexual violence increases and contraception access is disrupted, the report said.

“We have heard stories from pregnant women who knew that nutritionally they weren’t going to be able to support their pregnancy” in Ukraine, UNFPA executive director Natalia Kanem said.

“There are also predators and traffickers and examples of people who are seeing the tragedy of war as an opportunity to target women and girls,” she told AFP.

She said studies estimated that more than 20 percent of displaced women worldwide experience sexual violence — “and I would bet that is under-reported because there is so much stigma around the issue.”

While figures are still sparse a month into the Ukraine war, she said that the conflict in Afghanistan was expected to lead to 4.8 million unintended pregnancies by 2025.

And the Covid-19 crisis has also hugely disrupted healthcare and contraceptive supplies, leading to up to 1.4 million unintended pregnancies in the first year of the pandemic alone, the UNFPA said.

The UNFPA’s annual State of World Population report said seven million women had to be hospitalised each year after unsafe abortions, which are one of the leading causes of maternal death.

Ayse Akin, a doctor in Turkey, said she had treated numerous women who had died of injuries from clandestine abortions.

Yana Rodgers, faculty director of the Center for Women and Work at Rutgers University in the United States, said the UNFPA report was “excellent and carefully researched”.

She pointed to a US policy commonly known as the “global gag rule”, which denied American international aid to organisations that advocate for — or even provide information about — abortion.

Former president Donald Trump reintroduced the rule as one of his first acts as president in 2017, before Joe Biden scrapped it last year.

Rodgers told AFP her research in 51 developing countries showed the policy “caused more rather than fewer abortions” largely because women had less access to contraceptives.

Anthony Ajayi of the African Population and Health Research Center told AFP the global gag rule had a “major effect” on the continent, where many countries “depend on donor funds for their family planning programmes”.

Kanem told AFP there was abundant evidence to show that the policy had a “profound effect” on the “upheaval and distortion in the provision of contraceptive supplies”.

The UNFPA report was built on new data analysing unintended pregnancy and abortion rates in 150 countries between 2015 and 2019 from the Guttmacher Institute, which advocates for abortion rights.