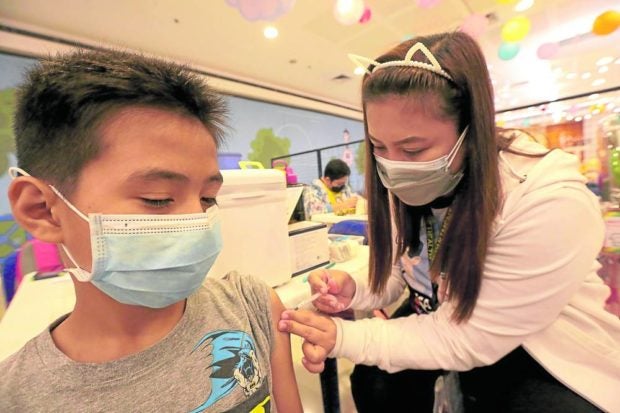 PEDIATRIC VACCINATION A boy reacts with his eyes as he is administered a COVID-19 vaccine dose during an inoculation drive in Marikina last month. —GRIG C. MONTEGRANDE

MANILA, Philippines — Daily COVID-19 infections will remain below 1,000 by the end of April despite relaxed mobility restrictions at the height of the campaign season for the May 9 elections, according to Health Undersecretary Maria Rosario Vergeire.

Citing the latest projections from the Department of Health’s (DOH) FASSSTER team, Vergeire said on Tuesday that daily COVID-19 cases were expected to reach a high of 268 and a low of only 70 as long as there were no new variants and compliance with current minimum health protocols were kept in place.

FASSSTER, or the Feasibility Analysis of Syndromic Surveillance using Spatio-Temporal Epidemiological Modeler, is composed of experts who analyze, survey and detect diseases.

“Projections based on assumptions, meaning current mobility patterns, compliance with public health standards and vaccination stay the same by April 30, nationally we will have daily cases of 70 to 268,” Vergeire said in an online press briefing when asked about case projections amid the election campaign.

However, in a scenario where adherence to minimum public health standards falls by 20 percent, daily infections are projected to rise to 670 a day, according to Vergeire.

The latest weekly case bulletin released on Monday showed that average daily cases stood at 389, down by 24 percent from 510 the previous week.

Vergeire stressed that the projections were not “cast in stone” and were being used only in planning and policymaking of the government.

“Other risk factors that may come into play in the coming weeks… [include] a new variant or increase in cases due to low vaccination coverage in a certain area,” Vergeire said.

Infectious diseases expert Dr. Edsel Salvana, who was at the same press briefing, also cited possible risks such as removing face masks in a huge crowd that may affect the daily case count.

“These projections are all dependent on assumptions that wearing of masks and vaccination and booster programs are followed,” Salvana said.

Health experts have urged the government to ramp up its vaccination program, particularly the coverage of booster shots that has remained very low even in the National Capital Region.

The DOH expects the pace of inoculation nationwide for the primary and booster shots to reach 75 percent and 15 percent, respectively, by the end of next month.

As of March 28, 73.02 percent of the target population had been fully vaccinated, while 78.82 percent had received their first doses. The government aims to jab 80 percent of the estimated 110 million population.

Special vaccination days are being held in Cebu province, Cotabato City, and the regions of Davao and Bangsamoro until April 1 to ramp up inoculation in areas where vaccines had been inaccessible.

According to the latest DOH data, the positivity rate dipped to 2.1 percent for the period March 21-27 from 2.7 percent the previous week.