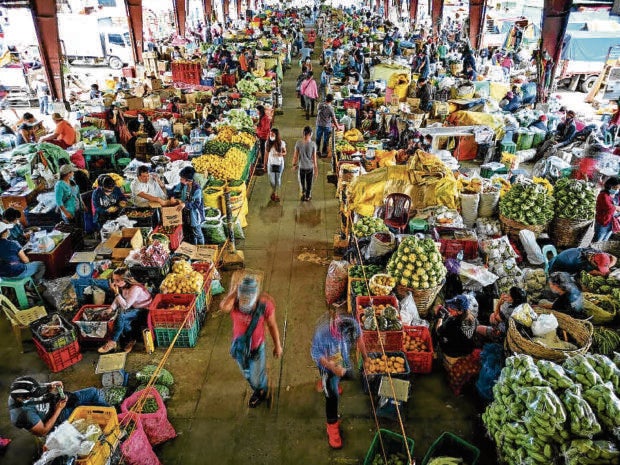 FRESHNESS OVERLOAD In this photo taken in October 2020, business at the vegetable trading post in the Benguet capital town of La Trinidad continues as assorted fresh produce are unloaded there daily for shipment to different markets in Baguio City, Metro Manila and other parts of the country. —EV ESPIRITU

MANILA, Philippines — Senator Francis Pangilinan on Monday blamed the “untouchables” for the continuous smuggling of agricultural products into the country, while a group of vegetable farmers and traders from Benguet slammed the “inaction” of local officials in addressing the influx of smuggled items in key markets.

(They’re too close with those in a position that’s why we are in this situation.)

Pangilinan’s remarks came on the heels of a complaint of a group of vegetable farmers that they were losing an average of P2.5 million, representing 40 percent of their daily income, to smugglers who bring in carrots from abroad.

Agot Balanoy, public relations officer of the League of Associations at the La Trinidad Vegetable Trading Areas, lamented the effects of smuggling on local farmers.

“We started complaining last year of July and August. But the Department of Agriculture denied that there is smuggling or smuggled vegetables coming from China entering our markets,” she said.

She slammed the “inaction” of local officials on the plight of the farmers. She further cited a resolution filed by ACT-CIS Rep. Eric Go Yap which called for a probe similar to that being conducted by the Senate.

Yap is the caretaker of the congressional district of Benguet.

But Balanoy said her group has “not heard of any investigation” in the lower chamber of Congress yet, unlike in the Senate, which conducted its second hearing on the matter on Monday.

“Our caretaker claimed that he filed a probe in the Congress… this was the month of October. We do not know if he really filed because there was no invitation for the investigation. We have not heard of any investigation in the Congress; it is only the Senate that is conducting an investigation,” she added.

INQUIRER.net has reached out to Yap for his comment through a text message but he has yet to respond as of writing.

For the Bureau of Customs (BOC), Assistant Commissioner Vincent Maronilla said the bureau is undertaking modernization efforts to automate its processes.

Among these efforts include a “Philippines Customs Modernization Project” funded by the World Bank, according to Maronilla. He said the BOC is at the initial stage of procurement for the project.

The project seeks to replace the BOC’s current system to modernize it and make it at par with international standards.

Currently, the BOC has an automated clearance system and is implementing the e-tracking of shipments through a global positioning system.

Meanwhile, the Department of Agriculture (DA) stressed the need to strengthen the country’s second border inspection.

Further, DA Assistant Secretary Federico Laciste Jr. also proposed providing all quarantine and inspection officers a tablet where they can monitor every shipment that comes in in real-time.

“In that tablet, nagpa-punch sila ng inspection at the same time makikita natin ano yung binubuksan at binababa,” he said.

(In that tablet, they will punch what they inspected at the same time we can see what shipments are being opened.)