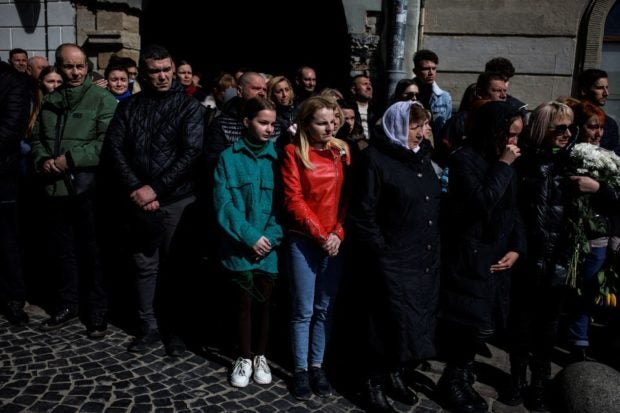 People attend the funeral ceremony of colonel Yuriі Kozhukhar, 54, and sergeant Kostiantyn Deriuhin, 44, who were killed in battle during Russia’s attack on Ukraine, at Saints Peter and Paul Garrison Church in Lviv, Ukraine, March 27, 2022. REUTERS

LVIV, Ukraine — The clouds of black smoke hanging over Lviv’s skyline had scarcely cleared overnight when mourners began gathering in Lviv on Sunday to bury Ukrainian soldiers killed in the war against Russia.

Even as firefighters hosed down an oil depot struck by rockets the day before, a crowd assembled at Saints Peter and Paul Garrison Church in Ukraine’s western capital, just 60km from the border with Poland.

“I knew that the churches would be very crowded today. I was so worried about today,” said 70-year old retiree Liubov Odnorih.

She was one of many crammed into the ornate Ukrainian Greek Catholic church for the funeral of two soldiers killed in other parts of the country.

It was the youth of those dying in battle that struck the priest, Roman Vysochanskii,

“I came and looked at the burial plots for so many of them, I saw that the children for whom I cry are younger than my own.”