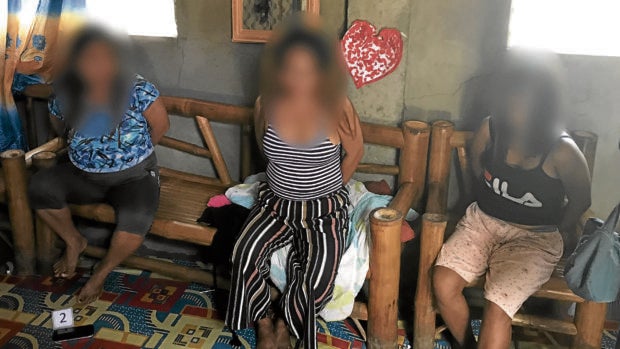 HANDCUFFED | Three of the five women who were arrested for online sexual exploitation of children in Lapu-Lapu City were handcuffed after they were arrested by authorities as shown in this 2019 photo. (CONTRIBUTED PHOTO)

CEBU CITY, Cebu, Philippines — Five women have been convicted by a trial court in Lapu-Lapu City, Cebu province, after pleading guilty to online sexual exploitation of children who were from age 2 to 12 years old.

Two of the women, whose names were withheld to protect the victims’ identities, entered into a plea bargaining agreement and were sentenced to 15 years in prison for a lesser offense of attempted trafficking. Plea bargaining is when an accused pleads guilty to a lesser offense, so he or she gets a lighter sentence.

Had they been convicted after a full court trial, the two accused would have been meted life imprisonment and a fine of P2 million to P5 million.

Instead, the women were each ordered to pay a fine of P500,000, an additional P500,000 for moral damages, and P100,000 for exemplary damages by the court, whose identity is also withheld to protect the victims.

The two accused were the final batch of five female traffickers, all in their 20s and 30s, who were arrested in simultaneous operations in Lapu-Lapu City in 2019.

The court handed down the verdict against the two accused on March 11 but the ruling was only made public on Friday.

The three other women also pleaded guilty to the same offenses and were convicted in February 2021 and in early March this year.

They were each meted a 15-year prison term during the same period for attempted trafficking under the same plea bargaining agreement mechanism, according to the International Justice Mission (IJM), a global nongovernmental organization actively fighting all forms of human trafficking and child exploitation.

On March 21, 2019, the Philippine National Police’s Women and Children Protection Center Visayas Field Unit conducted simultaneous operations in two houses in Lapu-Lapu City, which led to the arrest of five women. Rescued during the operations were 11 minors aged 2, 6, 7, and 12.

“The fight against sexual exploitation of children continues. With God’s guidance and the help of the community, such as the IJM, anything and everything is possible,” said Central Visayas Prosecutor Antonio Asiniero.