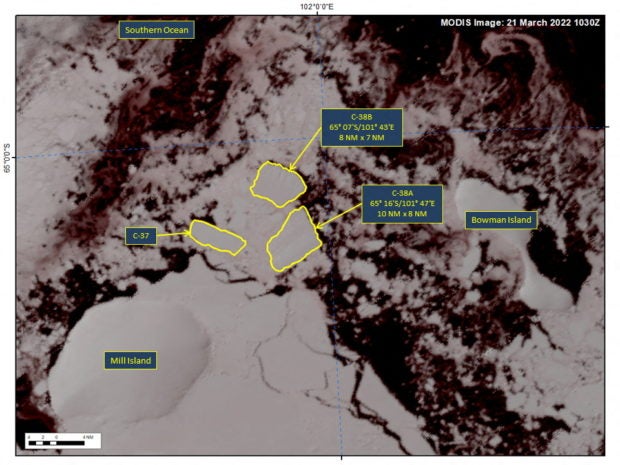 An East Antarctica ice shelf disintegrated this month following a period of extreme heat in the region, according to scientists.

“Possible it hit its tipping point following the #Antarctic #AtmosphericRiver and heat wave too?” asked NASA Earth and Planetary Scientist Catherine Colello Walker on Twitter on Friday, sharing images of a white expanse crumbling into shards over the dark ocean.

Ice shelves, permanent floating sheets of ice attached to land, take thousands of years to form and act like levees holding back snow and ice that would otherwise flow into the ocean, causing seas to rise.

The March heat wave, with temperatures reaching 70 degrees Fahrenheit (40 degrees Celsius) above normal in parts of East Antarctica, was tied to the atmospheric river phenomenon, said Peter Neff, a glaciologist at the University of Minnesota.

This process creates columns hundreds of miles long that carry water vapour from the tropics, creating an effect Neff described as “a fire hose of moisture.”

“The (Antarctic) climate is incredibly variable but this was off-scale,” Neff said. “This was at least twice as extreme of a warming event as we would have expected.”

Temperatures in the region normally sit around -60 degrees Fahrenheit (-51 degrees Celsius) at this time of year, but they were around 10 degrees (-12 Celsius) earlier this month.

They have now gone back to normal, Neff said.

Surrounded by vast oceans and buffered by winds that tend to protect it from large warm-air intrusions, the frozen continent is responding more slowly to climate change than the Arctic, which is warming at three times the rate of the rest of the world.

In the last century, East Antarctica barely warmed at all, but some regions have been affected and the continent lost an average of 149 billion tonnes of ice per year from 2002 to 2020, according to NASA. The loss of the Conger Ice Shelf is the latest example of changes afoot.

“This poor little ice shelf was just hanging on for dear life in this really warm coastal climate and it had been thinning and getting damaged over the last few decades,” said Neff.

The Conger shelf was splintering long before the heat wave, and its demise shows the Antarctic system is sensitive to atmospheric changes, but the event itself is not a cause for concern, said Ted Scambos, a senior research scientist at the University of Colorado Boulder.

A small glacier behind where Conger used to sit may now flow faster and unload a little more ice into the sea, he said.

“If it was in your back yard it’d be huge … but by Antarctic standards and by sea level standards its a tiny area,” he said.