For several local bets, it’s all over but the counting | Inquirer News
Close
menu
search

For several local bets, it’s all over but the counting 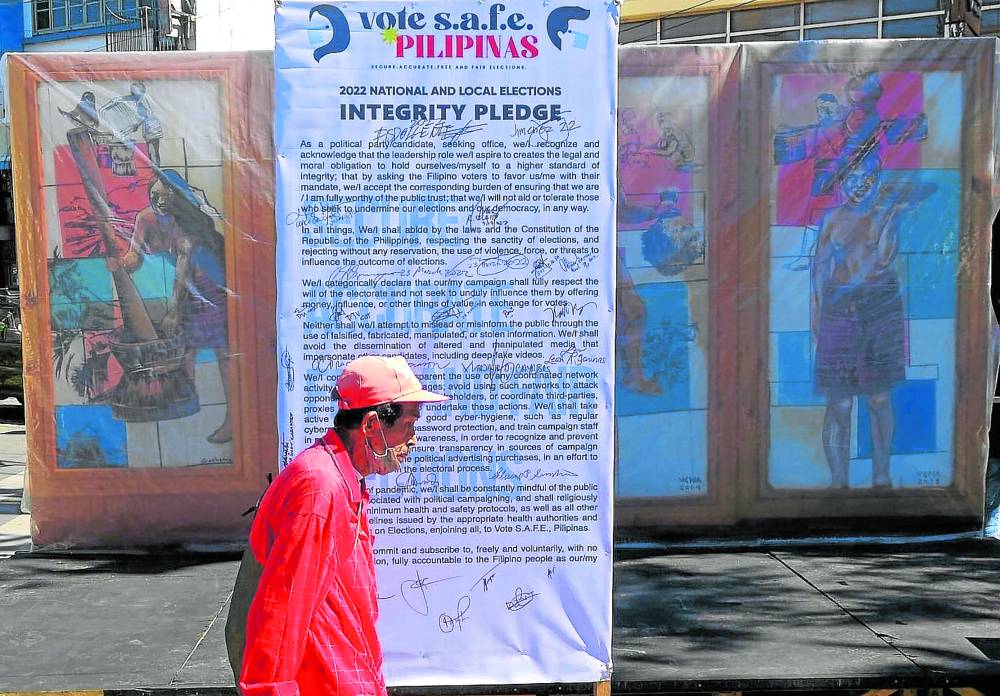 POLL PLEDGE A Baguio resident passes by an integrity covenant signed by candidates in the city after a unity walk for peaceful and honest elections on Wednesday, two days before the official campaign period for local posts starts. —EV ESPIRITU

The campaign period for local posts starts today but for more than 800 unopposed candidates all over the country, they can take it easy in reaching out to voters as they will only need to wait for a single vote on May 9 to make their victory official.

Securing a landslide victory in past elections or having satisfied constituents could have played a major role for some local candidates in running unchallenged in the coming elections, according to some voters. Others observed that candidates belonging to political dynasties would usually win the elections in their areas due to “name recall,” scaring off would-be opponents.

In San Luis town, Dr. Jay Sagum and his uncle, Mon Sagum, are unopposed for mayor and vice mayor, respectively.

Securing an early win in Zambales province are reelectionist San Marcelino Mayor Elvis Soria and his running mate, Jimbo Gongora. They are the only unopposed candidates in the province.

Rep. Geraldine Roman of Bataan’s first district is assured of serving her third and last term.

In Tarlac province, Gov. Susan Yap is unopposed for her third term.

Mayor Maria Cristina Angeles of Tarlac City and San Clemente Mayor Elma Macadamia, who both held their positions since 2016, are also unopposed.

In Bulacan province, only former Board Member Cholo Violago, who is running for mayor of San Rafael town, and his running mate, Lyn Veneracion, have no challengers. 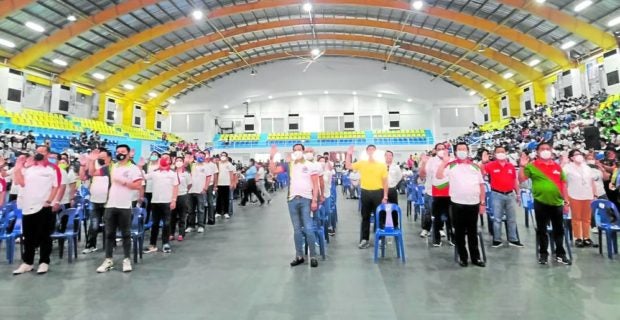 READY FOR THE HUSTINGS Local candidates in Bulacan province gather at the provincial capitol gymnasium on Thursday and promise to keep this year’s elections orderly. —CARMELA REYES-ESTROPE

At least 35 candidates in Ilocos Norte and Ilocos Sur provinces are also running without opponents.

Of the 23 towns and cities in Ilocos Norte, five candidates for mayor are unopposed. They are Mary Chrislyn Abadilla (Banna town), Crescente Garcia (Burgos), Francisco Espiritu Jr. (Dumalneg), Antonio Mariano (Marcos) and Aldrin Garvida (Nueva Era). All of them, except for Espiritu, are incumbent mayors.

Incumbent Mayor Carlito Abadilla II of Banna, who is seeking the vice mayoral post, is also running without an opponent.

The members of the long-standing political family in the province, the Singsons, are keeping their grip on local power as nobody dared to challenge them for the top elective seats in the capitol.

In Isabela province, Ilagan City Mayor Josemarie Diaz is seeking a second term with no rivals.

In Cagayan province, no one challenged the husband-and-wife tandem of reelectionist Mayor Harry Florida and Vice Mayor Yvonne Kathrina Florida of Allacapan town.

In Abra province, La Paz Mayor Menchie “Ching” Bernos, will not face a challenger in the lone congressional district race.

Also without opponents are Apayao Rep. Elias Bulut Jr., who is running for governor, and incumbent Gov. Leah Bulut-Begtang, who is running as Apayao’s lone representative.

The Tolentinos of Tagaytay City are among the big-name politicians in southern Tagalog who are assured of seats on May 9.

Cavite Rep. Abraham “Bambol” Tolentino will return to his former post as Tagaytay City mayor under National Unity Party with his wife, Agnes, the incumbent mayor, as his running mate. Agnes is also unopposed.

Tolentino is a brother of Sen. Francis Tolentino.

Also assured of victory as General Trias City mayor is sixth district Rep. Luis Ferrer IV. He is running with Councilor Jonas Labuguen, who is also unopposed for vice mayor.

In Angono town, Mayor Jeri Mae Calderon and her father, Vice Mayor Gerardo Calderon, have no challengers to their reelection bids.

Jovellar Vice Mayor Jorem Arcangel is unopposed for mayor after he filled in the candidacy left by his father, Jose, who died on Oct. 29 last year.

In Masbate province, Socrates Tuason is returning to his former position as mayor of Masbate City, replacing his wife, incumbent Mayor Rowena Tuason, who is running for vice mayor.

In Quezon province, three mayoral candidates are unopposed. They are Marcelo Gayeta of Sariaya and Alfred Rigor Mitra of Panukulan, both reelectionists, and Clara Larita of Patnanungan.