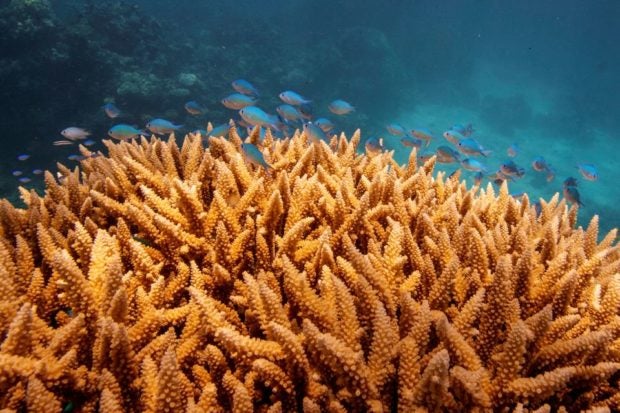 A school of fish swim above a staghorn (Acropora cervicornis) coral colony as it grows on the Great Barrier Reef off the coast of Cairns, Australia October 25, 2019. REUTERS

MELBOURNE — Waters off Australia face more frequent and severe marine heatwaves that threaten the Great Barrier Reef, a report said on Monday, as a United Nations team began a visit to evaluate whether the World Heritage site should be listed as “in danger”.

The reef is at risk of another mass bleaching, following three in the past six years, as sea surface temperatures off the northeast coast of Australia have soared to as much as 2-4 degrees Celsius above average, Australian environmental group Climate Council said in the report.

The government’s Great Barrier Reef Marine Park Authority last Friday said most of the marine park off the coast of Queensland state had been hit by “significant heat stress” over the summer, which in the Southern Hemisphere falls between the months of December and February.

“It’s getting grim and it’s getting to the point where we can’t even simulate the combination of conditions that the reef is experiencing in a controlled laboratory setting to discern this,” said marine biologist Jodie Rummer at James Cook University in Queensland.

The report was released the day UNESCO experts were set to begin a 10-day trip to Australia to meet scientists, regulators, policymakers, local communities and indigenous leaders to assess the government’s Reef 2050 Plan.

The team’s main goal is to assess whether the plan “addresses the threats posed to the Great Barrier Reef by climate change and other factors, and that it determines a pathway for accelerated action,” UNESCO said in a statement.

The experts’ report is expected by early May, and will lead to a recommendation to the World Heritage Committee – due to meet in late June – on whether the site should be listed as “in danger”.

With heavy lobbying, Canberra averted the embarrassment of an “in danger” listing in 2015 and last year, even as the conservative government resisted raising its 2030 target for cutting carbon emissions, which are considered the main cause of global warming.

The Climate Council wants Australia to slash its carbon emissions by 75% below 2005 levels by 2030, nearly three times as much as the government’s target.

Great Barrier Reef should be listed as ‘in danger’, UN body recommends