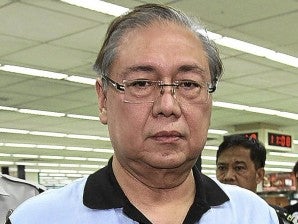 Mike Arroyo, in an interview, said he would support the candidacy of Lesaca for the fifth district seat of Negros Occidental, that includes this town, which Iggy represented in Congress.

Aleli Arroyo also said she would support a congressional bid by Lesaca, who had said she would have to consult the people of the district before making a decision.

Iggy’s term was to end in 2013. Speaker Feliciano Belmonte has said a special election may be called or another representative may be asked to fill the seat until then.

Ibuna said she did not want to think of politics because she was grieving, although she has reportedly been urged by some to run for the seat.

She would only say that if she did not run, she would support the one who would work for the people of the district with as much dedication, sincerity and love as Iggy.

Other names that have surfaced as possible congressional candidates are Binalbagan Mayor Alejandro Mirasol and Negros Occidental board members Melvin Ibañez and Emilio Yulo III.

Iggy’s remains arrived at the Bacolod Silay Airport after 6 p.m. Monday aboard a Philippine Airlines accompanied by Ibuna, her children and Iggy’s daughters Bianca and Dina with his first wife Marilyn Jacinto. Mike and Marilou arrived shortly after on a private plane.

Around 6,000 people, many carrying torches and in tears, lined a 200-meter stretch of the road leading to the church.

After Fr. Greg Patiño blessed Iggy’s remains in liturgical rites, local residents formed a single line as they filed past his coffin.

On Thursday, Iggy’s remains will be brought back to the Arroyo family home in La Vista, Quezon City. Burial is set for Friday at the Manila North cemetery.

In Manila, Ibuna’s lawyer Leonard de Vera said no one was barred from the wake and funeral of Iggy. With a report from Julie M. Aurelio

Read Next
Gatdula no-show at hearing he himself filed
EDITORS' PICK
WHO says monkeypox is not yet a health emergency
Guarding Sara: Why next VP is getting own security team
House energy committee chair Arroyo bats for cheap electricity
A massive highway complex makes living in the South highly attractive
Metro Manila logged most number of new COVID-19 cases — OCTA Research
Beyond the Chocolate Hills: A farm-to-table, heritage culinary adventure of Bohol
MOST READ
Leon Barretto steps up for sisters, asks dad Dennis Padilla: ‘Please stop resorting to public shaming’
LOOK: Rita Daniela pregnant with first child
Bea Alonzo, under lie detector test, says she wants prenup agreement with future husband
Marjorie Barretto to speak up on Dennis Padilla, kids’ relationship ‘in time’
Don't miss out on the latest news and information.