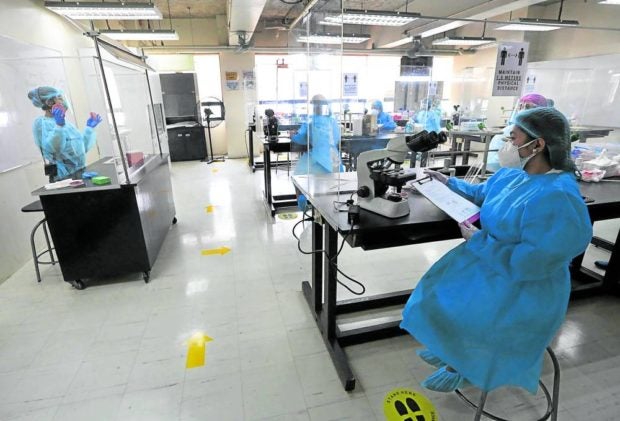 CLASSROOM RETURN | Medical students in their junior year listen to a lecture from an instructor as they start limited in-person classes at the National University in Manila in this photo taken in June 2021. (File photo by MARIANNE BERMUDEZ / Philippine Daily Inquirer)

While the health insurance requirement was considered a safety measure for the reopening of physical classes, Kenneth de Guzman, a third-year forensic science student from Holy Angel University in Angeles City, Pampanga province, likened their situation to that of soldiers being sent to battle without proper weapons.

“The government is risking [our safety] to return to the old normal in education but [it is] not providing [us] enough readiness and preparation,” he told the Inquirer.

In a virtual forum on Monday, an official of the National Union of Students of the Philippines (NUSP) said that while they supported the purpose of the health insurance requirement, “what we don’t agree with is that the government is not providing it for free.”

According to NUSP president Jandeil Roperos, the government was passing on to students the responsibility of ensuring their own safety during the resumption of in-person classes.

“This will come off as an additional expense for the students and it isolates those who do not have the capability to be insured,” she said.

And even though they might have PhilHealth insurance, it still would not fully cover all their expenses should they contract COVID-19, Roperos pointed out.

Quoting an officer of the Philippine Normal University Student Council, Roperos said that making health insurance coverage mandatory would result in physical classes being exclusive, discriminating against those without the capacity to comply.

She urged the government instead to allot funds for the health of students, teachers, and other education stakeholders.

“The [budget] should be provided to ease the burden of the parents and students and ensure their safety as well,” she said.

Under the supplemental guidelines for the joint memorandum of the Commission on Higher Education and the Department of Health signed on March 18, students 21 years old or older who suffer from any disability that renders them “totally dependent on the [PhilHealth] member for support” would be covered by the state insurer without having to pay additional premiums.

For younger students, they would be classified as dependents of their parents or legal guardians while those age 21 and above with no means of income and whose parents or guardians were non-PhilHealth members could enroll themselves in the program as indigent members.

At the same time, some student leaders from colleges and higher education institutions reported the possibility of tuition increases for future semesters because of the return to physical classes.

At the Angeles University Foundation in Pampanga, nursing students would have to spend an additional P5,000 to attend summer classes this school year while the institution’s scholarship contract had been amended and was now requiring former full scholars to pay fees, according to NUSP.

University of Baguio students might also have to deal with higher fees next semester, based on reports received by NUSP, as the university would impose a 10-percent hike in tuition and miscellaneous fees, “supposedly to augment faculty salary and construct a new building.”

For public schools and universities, the lack of a budget has blocked the resumption of in-person classes, preventing administration officials from retrofitting classrooms to ensure compliance with health safety protocols.

According to a report received by NUSP, an officer of the Polytechnic University of the Philippines’ Sentral na Konseho ng Mag-aaral said that limited classroom space and the large student population had prompted school officials to schedule the start of in-person classes in October, at the earliest.