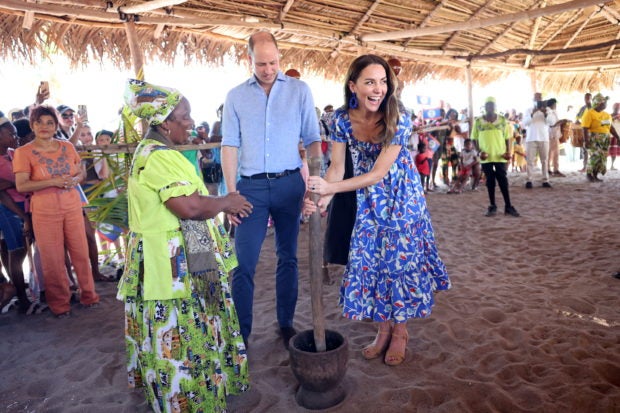 Britain’s Prince William and Catherine, Duchess of Cambridge, laugh as they spend time with the locals during their visit to Hopkins, a small village on the coast which is considered to be cultural centre of the Garifuna community in Belize, amid a tour of the Caribbean, March 20, 2022. Chris Jackson/Pool via REUTERS

HOPKINS, Belize — Britain’s Prince William and his wife Kate danced with Belizean villagers and helped make traditional chocolate on Sunday as the second day of their Caribbean tour passed off smoothly following an awkward start to the weeklong trip.

The arrival of the Duke and Duchess of Cambridge to the Central American country coincides with the celebration of Queen Elizabeth’s 70th year on the throne and comes at a time of growing scrutiny of past British conduct in the Caribbean.

Before the couple had even left Britain, a local protest prompted organizers to change their planned itinerary on Sunday in Belize, which was known until 1973 as British Honduras.

Their visit takes place nearly four months after Barbados voted to become a republic, cutting ties with Britain’s monarchy but remaining part of the British-led Commonwealth of Nations.

An event for the duke and duchess planned for Sunday morning in the southern village of Indian Creek was canceled after a few dozen residents staged a protest on Friday.

Villagers said they were upset that the couple’s helicopter was given permission to land on a soccer field without prior consultation. Locals are also in a land dispute with a conservation group backed by the royal family.

On Sunday, a few dozen villagers of Indian Creek staged a counter-protest, apologizing for the earlier incident and holding up placards with messages like “I want you back Prince and Princess” and “welcome Duke and Duchess of Cambridge.”

By then, the royal couple were on their new itinerary, which saw them embark on the Che’il Mayan Chocolate tour nearby. William and Kate both ground cacao seeds on the ka’ah, a traditional stone tool used by both Q’eqchi’ and Mopan Mayas.

Afterward the queen’s grandson and his wife went to Hopkins village, a traditional Garifuna community. The Garifuna are descendants of Africans and indigenous Kalinagos who moved along the islands and coast of the region to escape slavery.

Musicians at Hopkins struck up a gunjei rhythm, encouraging Kate to dance with a female group, while William joined a senior member of the community to groove along to the drumming. 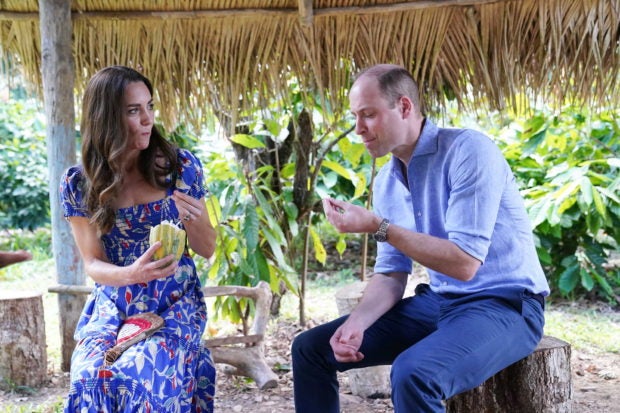 Britain’s Prince William and Catherine, Duchess of Cambridge sample fruit while visiting Belize amid their tour of the Caribbean, March 20, 2022. Paul Edwards/Pool via REUTERS

After trying the local food, the couple helped to plow the earth with a shovel to plant a tree. On Monday, they are due to explore the Chiquibul Forest Reserve in central Belize where they will visit British armed forces on jungle training.

The duke and duchess are due to stay in Belize until Tuesday morning, then visit Jamaica and the Bahamas.

Debates over colonial-era abuses and plans to seek reparations for slavery in Jamaica could push more countries to follow the recent move by Barbados, academics say.

Some Belizeans said they hoped the royal couple would come away from the visit with a deeper understanding of the country. Others said they would not be paying much attention.

“We’re not even going to see these people,” said Yamira Novelo, a resident of Belize City, “so I feel indifferent other than I wonder how this will affect traffic.”