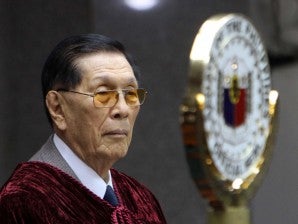 Lawyers of impeached Chief Justice Renato Corona on Tuesday lost in their bid to suppress evidence pertaining to his bank records, despite suspicions that the prosecution had obtained them through illegal means.

The records showed that the Chief Justice, who is charged with betrayal of public trust and culpable violation of the Constitution, kept millions in several peso accounts that he did not disclose in his statements of assets, liabilities and net worth (SALNs).

Senators, sitting as judges in the impeachment court, ruled to accept the evidence offered by prosecutors for the second impeachment article, which alleged that Corona failed to publicly declare his SALN.

“The court has arrived at a decision and ruling that it will deny the motion to suppress and accept the evidence for the consideration of the court in connection with Article 2 of the articles of impeachment,” Senate President Juan Ponce Enrile, the presiding officer, said shortly after a two-hour caucus in his office.

Enrile said the impeachment court would issue a “lengthy and formal” written decision on the matter by the time trial resumed on March 12.

He refused to discuss how the ruling was arrived at, but one senator, who asked not to be named, said it was “unanimous.”

“There were strong legal grounds articulated during the course of the caucus favoring denial of the motion,” the informant told the Philippine Daily Inquirer. Absent in the caucus were Senators Aquilino Pimentel III, Manuel Villar and Miriam Defensor-Santiago.

Enrile left the door open to the court’s admission of more prosecution evidence, this time, pertaining to Corona’s dollar deposits, the opening of which is now the subject of a pending case in the Supreme Court.

Last week, the prosecution said it was resting its case after presenting three articles of impeachment, but “reserved” the right to present more evidence for Article 2 should the Supreme Court later on rule to allow the opening of the dollar accounts.

Asked to explain how the Senate ruling would relate to the pending case in the high tribunal, Enrile said: “That’s another matter. Let the Supreme Court decide the case. If they’ll say there’s a violation of RA 6426, so be it. But that violation does not imply or mean that the evidence, released in violation of the law, could not be admitted as evidence.”

Republic Act No. 6426 refers to the Foreign Currency Deposit Act.

“Now, the result of a decision that there’s a violation means that whoever was the one responsible for the release will have to go to jail when a criminal case is filed against that person, whoever he is or she is, under the penalties provided in the laws,” he added.

Section 8 of the law states that “all foreign currency deposits authorized under this Act … are hereby declared as and considered of an absolutely confidential nature and, except upon the written permission of the depositors, in no instance shall (they) be examined, inquired or looked into by any person, government official, bureau or office whether judicial or administrative or private.”

Defense lawyers cited this provision in their motion to suppress evidence on Corona’s bank records.

Enrile made it clear that the ruling pertained only to this motion. He said the impeachment court would issue another ruling on Monday to identify which pieces of evidence that the prosecution formally offered last Friday would be admitted.

The defense panel has until today to submit its formal opposition to the offered evidence.

Enrile noted that the defense motion cited cases in which pieces of evidence were excluded because the “unwarranted search or arrest is done by the state or its agents like the police, the NBI (National Bureau of Investigation), and other law enforcement people.”

In the case of Corona’s bank records that the prosecution submitted, the presiding officer said “there’s no clear showing that it (leak) was done by the government and so far, as the facts indicate, there’s no question that these alleged bank deposit account numbers exist.”

If the bank records had been leaked by a “private party,” Enrile said the “exclusionary rule” would not apply. The rule means that a piece of evidence would be inadmissible if it was gathered in a manner that violated constitutional rights.

Enrile noted that both RA 6426 and RA 1405 (Bank Secrecy Law) did not contain the “exclusionary” provision, which “expressly excludes or proscribes the admissibility of the records of bank deposits when they’re illegally released to the public.”

Told that he had pointed to examiner Jerry Leal of the Bangko Sentral ng Pilipinas (BSP) as the one responsible for the leak, the senator said: “My opinion was simply an opinion at that moment. We’re still investigating it.”

But what if it was proven later on that it was a BSP official who released Corona’s bank records? Enrile replied: “We are going to decide this case on the basis of facts now present. In that case, at that point, if it was done by government agents, then they would have to suffer the penalties.”

Until the Supreme Court resolves the dollar deposit issue, the impeachment court would focus on evidence on bank deposits submitted by the prosecution so far, Enrile said.

Based on the testimony of a PSBank president and a manager of the Bank of Philippine Islands Ayala branch, the prosecution said Corona kept P31.75 million in the two banks in 2010, but declared only P3.5 million in cash and investments in his SALN for that year.

“We are talking of the documents that were submitted. We are not talking of opening the (dollar) accounts,” Enrile said.

Enrile also sought to clarify the prosecution’s vague position on whether it was “withdrawing” or “terminating” its presentation of evidence on the five remaining articles of impeachment.

In a notice, the prosecution said it had “terminated the presentation of evidence” on Articles 1, 4, 5, 6, and 8. But defense lawyers earlier argued that such a move meant that they could still present their own evidence on these charges.

Enrile said the court would issue a formal ruling “at the proper time.” But he said: “The records will bear us out that we clarified it very clearly and our understanding and the understanding of the court is that those articles … are deemed as if they were not in the articles of impeachment filed before the court.”

“The decision of the court will matter, not the manifestation of the prosecution,” he said.