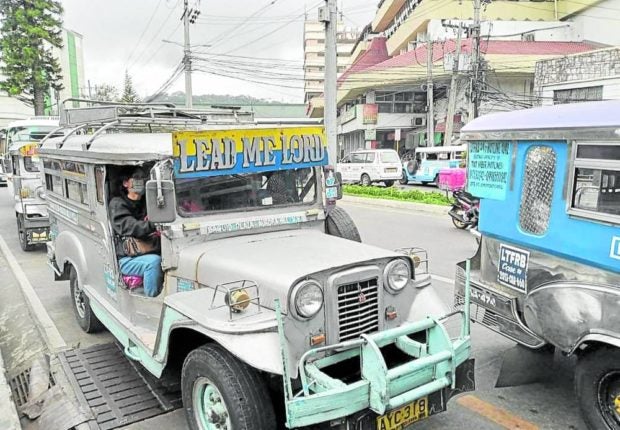 KING OF ROAD | Conventional jeepneys ply the main thoroughfares in Baguio City in this photo taken on Monday. Jeepney operators are given by the government until the middle of 2022 to consolidate and convert their public utility vehicles into modern environmentally friendly urban buses. But transport regulators are being asked to postpone the deadline because of the pandemic and high fuel prices driven by the Russian invasion of Ukraine. (ALLAN MACATUNO / Inquirer Northern Luzon)

That was how jeepney driver Modesto Floranda described the difficulty in getting the P6,500 in fuel subsidy which he and an estimated 375,000 drivers of public utility vehicles (PUVs) are seeking, amid the rise in fuel prices following the conflict in Ukraine late last month.

“The big problem here is the hardship of claiming the assistance from the Land Transportation Franchising and Regulatory Board (LTFRB) due to the long process and many documents that we need to submit,” Floranda, who is also national president of the Pinagkaisang Samahan ng mga Tsuper at Opereytor Nationwide (Piston), said in an interview with the Inquirer on Sunday.

“The subsidy is supposed to be for fuel products so we’re telling the LTFRB and Congress that the Pantawid Pasada should directly benefit the drivers,” Floranda also said, referring to the Department of Energy’s one-time fuel subsidy program last year which, as PUV drivers and operators understand, is the same subsidy they are seeking anew.

The latest fuel subsidy, whose distribution began on March 15, may be obtained through the same Pantawid Pasada card, according to an official of the LTFRB.

But instead, the intended beneficiaries have been complaining about the aggravation of going back and forth in following up on their due benefits.

Complicating matters is the issue of ownership when it comes to jeepneys that have been sold.

Ricardo Rebaño, president of the Federation of Jeepney Operators and Drivers Association of the Philippines (Fejodap), cited some instances wherein new operators could not apply for a Pantawid Pasada card, because either the LTFRB had suspended the transfer of ownership or the previous operators were not cooperating with the new ones in completing the requirements for the subsidy.

To claim the benefits, new operators need to submit many requirements that usually come from previous operators.

The LTFRB allows new operators to get a special power of attorney, authorizing them to act on behalf of the previous owner.

Rebaño recalled a new operator being able to secure the legal documents needed for his subsidy, but upon going to the bank to claim the cash assistance, he was asked to present a government ID of the previous owner.

“There is also another situation wherein the old operator was able to apply for a Pantawid Pasada card but failed to turn it over to the new operator, to whom he sold the vehicle,” he said.

“The cash aid—which should be given to the drivers—may be transferred to the previous operator,” he added.

“These are some of the problems as to why just a small portion of our sector [is] getting the subsidy,” Rebaño said.

He said if the government really wants to provide assistance, it must approve the P1 increase in the minimum fare for jeepney trips—which some jeepney drivers in Metro Manila are actually already charging their passengers.

The LTFRB had rejected that petition, although it granted such an increase in 2018 amid the same concern at the time over rising fuel prices.

Floranda said, “Our call is to bring back the previous order in 2018 when the government approved of increasing the fare because the price of diesel back then reached P59.”

“We hope that they would approve this P1 increase for the meantime, to allow drivers to survive the everyday need to avail [themselves] of fuel products,” he added.

Rebaño said: “If a jeepney driver can take up to 200 passengers a day, that would automatically be an additional P200 that would augment their meager daily earnings.”

He admitted that some jeepney drivers were already charging the P10 fare, but said “it’s not mandatory and only up to the passenger.”

“What is needed here is action. While [the government] is thinking of ways to help the transportation sector, in the meantime, they should release an order to approve the temporary P1 fare hike,” Rebaño said.