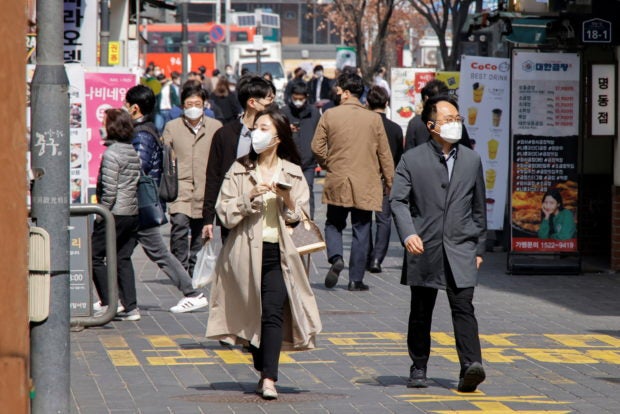 SEOUL — South Korea recorded a record 621,328 new daily COVID-19 cases and a daily record 429 deaths, authorities said on Thursday, as the country which once took an aggressive anti-pandemic approach is set to end COVID restrictions.

The Korea Disease Control and Prevention Agency (KDCA) said the highly infectious Omicron variant was driving the record wave of infections and while a public survey revealed many expected to catch the virus, few feared serious health consequences.

Daily infections are far higher than health authorities had predicted. On Wednesday the government said it expected the wave to top out with daily cases in the mid-400,000. Less than a month ago it had predicted the peak of the wave would come in mid-March at 140,000-270,000 daily cases.

KDCA official Lee Sang-won said some 70,000 cases and 200 deaths were missing in tallies over the past couple of days, apologizing for errors in its compiling procedures. But he said the current wave has been stronger than expected and could continue to beat its predictions.

Despite the numbers, the government shows no sign of rethinking plans to remove almost all social distancing restrictions in the coming days and weeks, and public opinion appears to support those moves.

It has pushed back a curfew on eateries to 11 p.m., stopped enforcing vaccine passes, and plans to drop a quarantine for vaccinated travelers arriving from overseas.

A decision on whether to ease further measures, such as a current six-person limit on private gatherings, is expected as early as Friday. South Korea also mandates masks in all public indoor and outdoor spaces.

Though it never adopted a “zero COVID” policy and never imposed wide lockdowns, South Korea once used aggressive tracking, tracing, and quarantines to control new cases. That has been largely ended or scaled back, though it still tests widely.

Nearly 63% of the country’s 52 million residents had received booster shots, with 86.6% of the population fully vaccinated, the KDCA said.

A government analysis of some 141,000 Omicron cases reported in the country over the past year showed that there were no deaths among people under 60 who had received a booster shot, Son Young-rae, a health ministry official, said on Wednesday, adding that COVID could be treated like the seasonal flu.

“We see this could be the last major crisis in our COVID responses, and if we overcome this crisis, it would bring us nearer to normal lives,” Son told a briefing.

In a survey released on Tuesday by Seoul National University’s graduate school of public health, the number of South Koreans who think they are likely to contract the virus was the highest since its surveys began in January 2020, at around 28%, but the number of those who worry about a serious health impact from the infection was the lowest, at about 48%.

“Despite the Omicron variant’s much higher infectivity than Delta, its relatively low fatality appears to have alleviated people’s concerns.”

How South Korea went from ‘test, trace, treat’ to ‘let it spread’