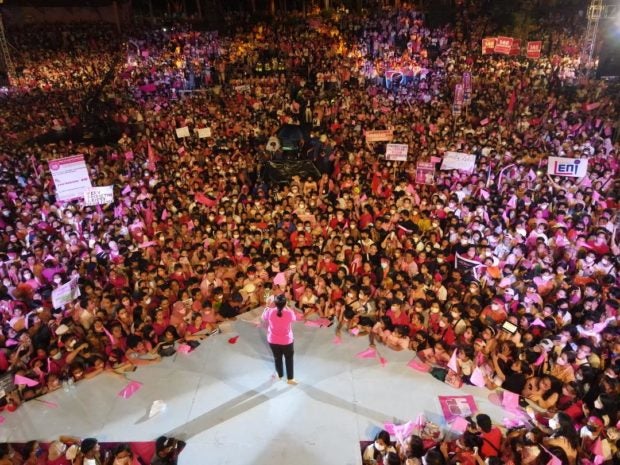 (Whether they close the roads, stop the trips of vehicles, remove tarps, vandalize the murals, in the face of truth, whether the sun shines or not: Nobody can stop the united strength of the people.  For us, we show up because we all know what is at stake with this fight.)

Robredo then encouraged supporters to win the elections in May through courage, unity, camaraderie, compassion, and hope.

(Unity, fellowship, showing compassion, hope: these are what would propel us to victory. Because of your strength, we would not be oppressed, we would not let worries beat us.)

To recall, Robredo’s supporters have alleged that road construction and closure projects appeared to have been deliberately set up to prevent them from reaching the venue of the rally in General Trias City, Cavite.

Her supporters also alleged that a transport company in Negros Island canceled bus trips to prevent them from going to Bacolod City for the rally. The company has denied this, saying they cannot allocate many buses for one trip and leave other routes without a fleet.

A pro-Robredo mural in Las Piñas City was also erased a few days ago supposedly hours before the caravan of another presidential candidate took place.

Several campaign materials were likewise ordered removed by the Commission on Elections (Comelec), even if the tarpaulins and posters were placed within privately-owned properties. The private property owners raised the issue before the Supreme Court (SC) and asked the high court to stop Comelec’s “Oplan Baklas.”

On March 9, the SC issued a temporary restraining order against the Comelec’s program.