TOKYO (Reuters) -A powerful magnitude 7.3 earthquake jolted Japan’s northeast coast off Fukushima on Wednesday, leaving two dead and 94 injured and reviving memories of a quake and tsunami that crippled the same region just over a decade earlier.

There were some reports of fire, the government said, and a number of people sustained injuries, but none of those immediately appeared serious. Public broadcaster NHK said one person had died.

The quake was felt in Tokyo, some 275 kilometres (170 miles) away, where the shaking of buildings was long and pronounced. Hundreds of thousands of homes in the capital were plunged into darkness for an hour or more, although power was fully restored by the early hours of Thursday morning.

Just before midnight, the quake hit off the coast of Fukushima prefecture at a depth of 60 kilometers, the Japan Meteorological Agency said. It sparked memories of a devastating earthquake and tsunami in March 2011, a week after that disaster’s 11th anniversary.

There were no abnormalities at nuclear power plants, Prime Minister Fumio Kishida told reporters. The 2011 disaster triggered a meltdown at the Daiichi nuclear plant in Fukushima that Japan is still coming to grips with.

Authorities earlier said a fire alarm had been triggered at a turbine building at the crippled plant. 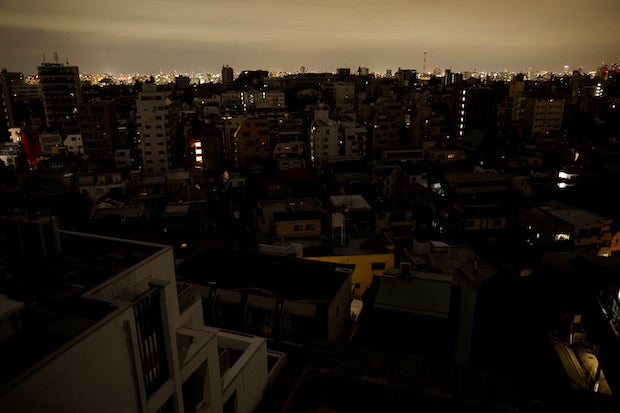 Houses and buildings are seen in an electric stoppage at the area after an earthquake at Toshima ward in Tokyo, Japan March 17, 2022 (Japan time). (REUTERS/Issei Kato)

Separately, a Shinkansen bullet train derailed with some 100 people on board, although there were no reports of injuries.

Utility Tokyo Electric Power Company said that initially around 2 million households lost power on Wednesday, including 700,000 in the capital.

In northeast Japan nearly 100,000 households were still without power early on Thursday, according to Tohoku Electric, the local utility. 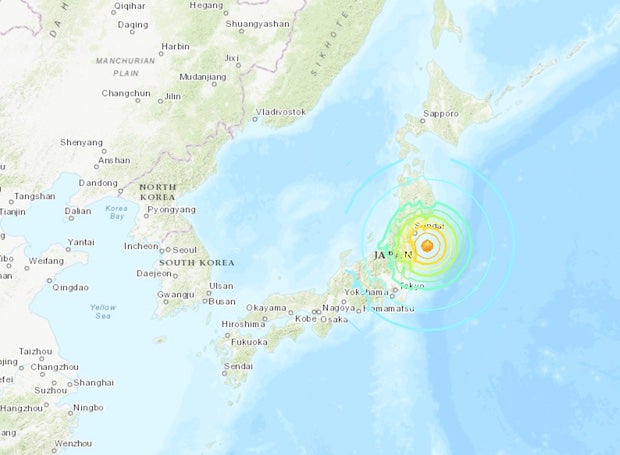 The quake struck off the coast of northeastern Japan. (Image from the US Geological Survey)

Authorities issued a tsunami warning for the region of as high as 1 metre (3.3 ft), with waves of 20 centimetres (8 inches) reported in some places. Residents in at least one coastal area were told to evacuate.

Strong quakes in Japan can disrupt manufacturing, particularly of sensitive electronic components such as semiconductors that are made using precision machinery.

The 2011 quake halted production for three months at a factory owned by Renesas Electronics Corp, which makes nearly a third of all microcontroller chips used in cars. A fire at the facility last year exacerbated a chip shortage that has forced auto companies to curb output.

Officials at Renesas were unavailable when Reuters contacted them outside regular business hours.

Sitting on the boundary of several tectonic plates, Japan experiences around a fifth of the world’s earthquakes of magnitude 6 or greater. 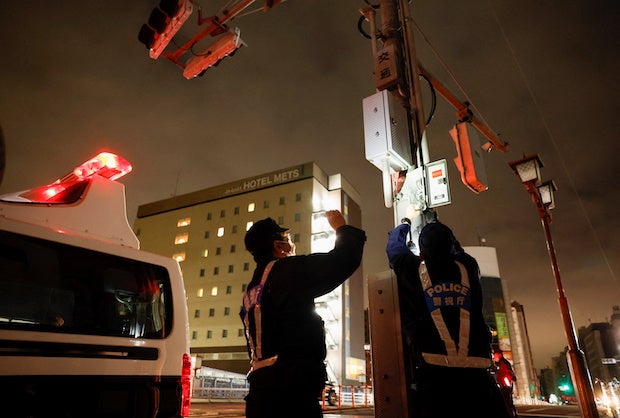 Police officers try to restart traffic signals by attaching an electric generator during an electric stoppage in the area after an earthquake in Tokyo, Japan March 17, 2022. (REUTERS/Issei Kato)