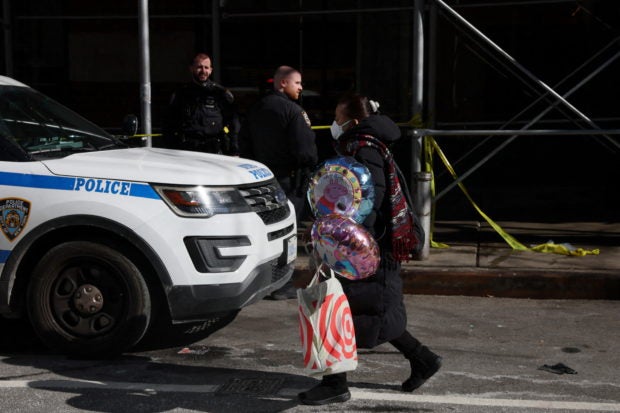 FILE PHOTO: A woman walks with balloons by an area where NYPD police have marked off an area where a 43-year-old man was found dead on Sunday evening in New York City, U.S., March 14, 2022. REUTERS/Shannon Stapleton

WASHINGTON — A suspect in shootings of five homeless men, two fatally, in Washington and New York, was taken into custody on Tuesday by federal agents in Washington, but New York police said investigators were still gathering evidence to charge him with the New York crimes.

Gerald Brevard, 30, of southeast Washington, D.C., was charged with homicide, assault with a dangerous weapon and assault with intent to kill, a spokesman for Washington’s Metropolitan Police Department said.

The Bureau of Alcohol, Tobacco, Firearms and Explosives (ATF) said special agents found the suspect after an urgent, days-long manhunt, and brought him to Washington police detectives for questioning. The arrest was also announced in a joint statement by the mayors of the two cities.

Three of the shootings took place in Washington over the past two weeks. Two other homeless men then were shot in New York. Police said one gunman shot all five men while they slept on the street. Investigators linked the violence through .22-caliber shell casings found at the crime scenes.

“We do not have anybody under arrest in New York or for any of these incidents that occurred in New York,” New York Police Chief of Detective James Essig said at a news conference, noting police were gathering and turning over all criminal evidence to the Manhattan District Attorney’s Office.

“I’m very confident we’ll get there,” he said.

Washington’s Metropolitan Police Department said on Twitter that it was interviewing the suspect.

New York City Mayor Eric Adams said in the joint statement with Washington Mayor Muriel Bowser that the “cold-blooded killer” targeted homeless people with no regard to life.

“We know that this experience has been especially scary for our residents experiencing homelessness,” Bowser said.

The shootings began on March 3, when Washington police were alerted to sounds of gunshots at about 4 a.m. The victim was taken to hospital for treatment of non-life threatening injuries.

On March 8, police in that city found another homeless man suffering from gunshot wounds. He too was transported to a hospital for treatment of non-life threatening injuries.

The following day, police spotted a tent fire and found a deceased homeless man inside. Further investigation determined that he had suffered multiple stab and gunshot wounds.

A short time later, police responded to an emergency call about a man suffering from gunshot wounds to the head and neck, and found the victim dead inside a sleeping bag on Lafayette Street.

Violent crime has risen in both cities and there has been a spate of seemingly random attacks in New York City.