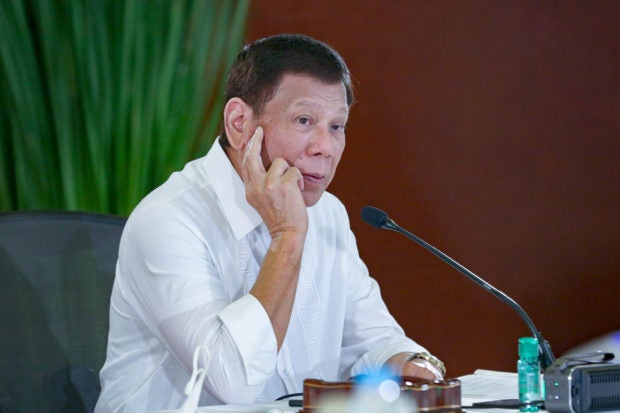 MANILA, Philippines — President Rodrigo Duterte on Saturday said he would be leaving office with a “relatively peaceful” Mindanao as the national government guides its transition to autonomy and leads the improvement of relations with the country’s Muslim Filipino community.

In an interview on SMNI television channel with Pastor Apollo Quiboloy, the president also underscored the importance of giving Muslim Filipinos a bigger voice in national affairs as well as in their homelands.

“We have a good rapport with the [Muslims] of Mindanao. And I think that [we should] just allow them [participation] in the governance of our country and give them enough elbow room to, you know, just govern without interference of armed groups,” he added.

During his term, Duterte appointed numerous Muslim Filipinos to national government positions, among them the new chair of the Commission on Elections, as well as the first Muslim associate justice of the Supreme Court in 34 years, various appeals court justices, judges, and prosecutors. He said he also appointed Muslim Filipinos as Cabinet and Cabinet-level officials.

“I deliberately [made those appointments] so that they won’t say that they are being left out,” he said.

It was during Duterte’s term that the Bangsamoro Autonomous Region in Muslim Mindanao (BARMM) was formally created with the ratification of its basic law, the Bangsamoro Organic Law (BOL), and the expansion of covered areas during two plebiscites held on Jan. 21 and Feb. 6, 2019. The president approved the BOL in July of the previous year.

According to the president, the Muslim population’s animosity with the government has waned after the administration addressed the issues regarding Mindanao.

He said the fact that ambushes, depredations, and attacks on security forces in BARMM had dwindled meant to him that “the Moro hatred has been slowly dissipating among them because we have given them what they all wanted.”

The president also said that “for the longest time” there has not been any kidnappings of visitors or nonresidents in the BARMM.

The deployment of troops to Mindanao also helped in keeping the island calm, he added.

“I think we have [a] relatively peaceful Mindanao. [There were] the contentious issue [of] yesterday [regarding] the BARMM and we have given way to [Chief Minister] Murad [Ebrahim] and here in Jolo, we ordered the Armed Forces [of the Philippines] to place one division, that’s plenty [of soldiers], and so it has calmed a bit,” Duterte said.

“I think that we have achieved militarily the objectives of keeping the peace in Mindanao. God willing, if this will be the equilibrium that will be maintained, we are trouble-free, I hope and I pray, of course,” he added.

He said only the splinter group Bangsamoro Islamic Freedom Fighters (BIFF) was sowing terror but it has been experiencing internal squabbles “because of politics.”

While secessionism and separatism may be waning in Mindanao, the Duterte administration was confronted by the rise of Islamic extremism. The Maute and Abu Sayyaf jihadist groups besieged Marawi City in 2017, which prompted Duterte to place the entire Mindanao under martial law for more than two years until they were defeated.