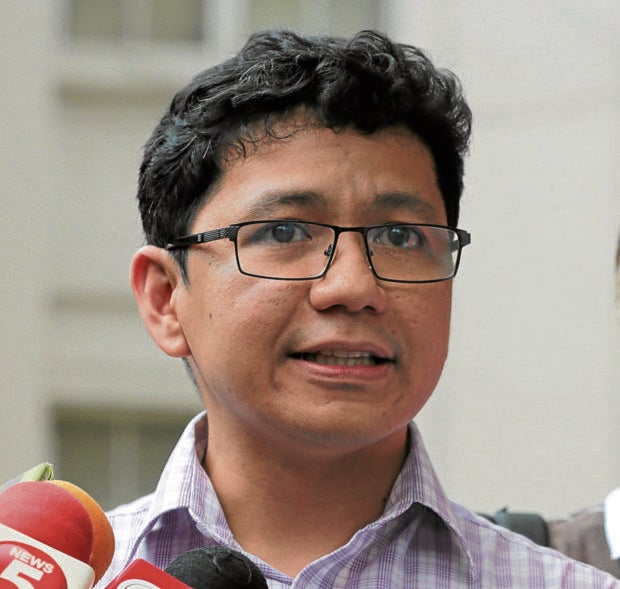 ILOILO CITY – The physical pain from human rights lawyer Angelo Karlo Guillen’s injuries still lingers a year after he narrowly escaped death when he was repeatedly stabbed with a screwdriver on March 3, 2021 in this city.

“It is still painful when pressure is applied on the area where the screwdriver was embedded,” Guillen told the INQUIRER in an interview on Wednesday.

The scar on his left temple that is covered by hair is barely visible, but those on his shoulder and neck are constant reminders on how he cheated death exactly a year ago.

Two masked assailants repeatedly stabbed Guillen while he was on his way to his boarding house.

They sped off on separate motorcycles driven by two accomplices after taking the lawyer’s backpack with personal belongings and a shoulder bag containing his laptop, external disk for backup files and case documents.

His assailants, however, left behind his wallet and smartphone, which were inside his pockets.

Guillen, 34, spent 18 days recuperating in a hospital from at least eight stab wounds. For several months, he experienced numbness on the right side of his body.

“The doctors said I was very lucky because the screw driver struck a hard bone. A few centimeters off and it could have been fatal,” Guillen said.

Investigators initially surmised robbery may be the motive of the attack, but Guillen and his colleagues believe it was related to the human rights cases he handled as vice president for Visayas of the National Union of People’s Lawyers (NUPL) and secretary general of its Panay chapter.

“It is clear that it was part of the continuing pattern of attacks against members of progressive organizations and human rights defenders,” Guillen said.

On December 30, 2020, nine leaders of the indigenous Tumandok tribe were killed and 16 others were arrested in Capiz and Iloilo provinces in a combined police and military operation.

The Philippine National Police claimed that those killed fought back when operatives were serving search warrants for possession of illegal firearms and ammunition on alleged leaders and members of the Communist Party of the Philippines and New People’s Army.

Guillen, who is among the NUPL lawyers who have been repeatedly Red-tagged, is one of the legal counsels of those arrested.

The attack on Guillen drew widespread condemnation, including from the Integrated Bar of the Philippines and other national and international lawyers groups.

But a year after he was attacked, no arrest has been made.

“It’s always at the back of my mind that my attackers and those behind are still out there and they could try to kill me again,” he said.

He has taken additional security measures but has not stopped handling cases of human rights violations in defense of marginalized sectors.

“Despite what happened to me, I always remind myself that I am among the very few who fortunately survived. I have to maximize whatever time I have left for those I can help because the human rights violations continue,” Guillen said.

He is thankful for the support of fellow lawyers, classmates, friends and colleagues in the human rights movement.

When he was recuperating in the hospital last year, the Bacolod City Regional Trial Court (RTC) ordered the release of detained members of progressive organizations in the city after the court voided a search warrant issued by the Quezon City RTC that was used in the arrest.

Guillen, a political science graduate of the University of the Philippines – Visayas and valedictorian of Iloilo City’s University of San Agustin College of Law Class of 2013, was among those who handled the case and prepared the court pleadings.

In June last year, the Capiz RTC ordered the release of six of those arrested in the December 30, 2020 police and military operation after the court quashed the search warrants issued by the Manila RTC.

“It is dangerous for us but I cannot give up my human rights lawyering,” Guillen said.