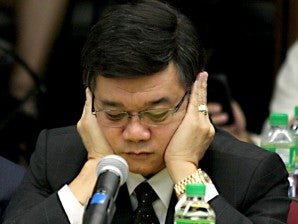 In a closed-door caucus on Tuesday, the Senate will take up the penalty to be imposed on a private lawyer for the prosecution, Vitaliano Aguirre, for contemptuous behavior during Chief Justice Renato Corona’s impeachment hearing last week.

Loath to accept that one of its private lawyers could be detained for standing up to feisty Senator Miriam Defensor-Santiago, the prosecution panel on Monday appealed for the “understanding” of senator-judges.

In a phone interview, Marikina Representative Romero Quimbo, a spokesperson for the prosecution, urged senator-judges to forgive Aguierre, pleading,  “Just let it go.”

“He has already apologized to the court. He has also withdrawn his participation, and in our minds, considering that his work was voluntary … he seems to have already acted with contrition,” Quimbo said.

“It’s possible that he would not be detained,” Sotto said, adding that some senators were proposing a censure.

He said detention could generate undue publicity for Aguirre and sidetrack the proceedings.

Senate President Pro Tempore Jose “Jinggoy” Estrada had called attention to Aguirre’s disrespect for the court by covering his ears with his hands as Santiago berated the prosecution for its sudden decision to drop five of the eight impeachment articles and rest its case.

Santiago on Monday told her latest critic, Fr. Catalino Arevalo, to help in the fight against pedophilia inside the Catholic Church instead of consigning her to “the fires of hell” for calling bumbling prosecutors “gago,” or fools.

Santiago, a former trial judge known for berating lawyers who do not measure up to her standards, also warned Arevalo, spiritual advisor of the late President Corazon Aquino, that the disenchanted youth “no longer accept the claim of absolute morality by certain clerics.”

“That priest should spend his energy fighting pedophilia within the Catholic Church, instead of meddling in politics and serving to divide church practitioners,” she said.

Santiago reminded Arevalo that Vatican II no longer considered hell as a specific location for errant souls but rather, a spiritual condition.

“In theology, hell is not a geographical place, but is a metaphor for distance from God … Under Vatican II, there is no hell; but even if there is, there is nobody there,” explained the senator who holds a master’s degree in theology from Maryhill School of Theology.

Santiago added that Vatican II also stated that the Catholic Church no longer clings to the monopoly on truth.

“The widespread popularity of certain books against religion and against certain churches has been triggered by the disaffection of young people who no longer accept the claim to absolute morality by certain clerics,” she noted.

In fact, the senator said social media “has been showered with angry comments from young people attacking religious meddling in the current impeachment trial, instead of concentrating on the immorality of corruption.”

“They want me to change my personality. That’s not possible because I was born this way,” Santiago said yesterday in her Twitter account.

“I have a Type A personality. I take my job seriously. I demand the best from myself and from others. I easily lose my temper over corruption and incompetence.”

Corona’s lawyer, Ramon Esguerra, said on Monday that the defense panel could likewise get a dressing down when it begins its presentation on March 12.

“It’s a concern to be humiliated, but you know, the practitioners in us—all of whom we are—we’ve been used to that, day in and day out in our court practice,” Esguerra told the Inquirer.

“We’re not onion-skinned. We’re used to that and we don’t have a constituency to protect anyway,” he said.