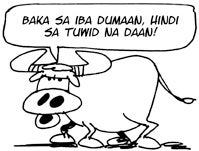 They may have spent close to P2 million for the visit of President Benigno Aquino III lasting just a few hours but that doesn’t mean they were not adhering to his policy of following the “matuwid na daan,” or the righteous path.

Interviewed on Radyo Inquirer Monday, the Bureau of Corrections (BuCor) spokesperson, Superintendent Richard Schwarzkopf, confirmed that “more or less” that amount was spent in three days of preparations for Mr. Aquino’s visit to the New Bilibid Prison (NBP) on January 27.

The presidential visit marked the launch of the “BuCor 2012 Road Map,” a 10-year prison reform program.

Schwarzkopf said  the meetings prior to the project’s launch “were attended not just by  more than 1,000 employees of BuCor, but also representatives of religious groups, nongovernment organizations.”

He said the BuCor would not engage in excessive spending because “we follow the matuwid na daan policy of President Aquino.”

The launch of the project coincided with a government program against frivolous spending.

Documents obtained by the Philippine Daily Inquirer showed that the BuCor spent over P576,000 for the printing of tarpaulin banners and P203,700 to rent the carpet used at the event. The documents also showed the BuCor paid P450,000 for the rental of an air-conditioned tent and P221,000 for meals for the launch.

The BuCor has a daily budget of P50 for every inmate.

On a separate issue, Schwarzkopf denied reports the BuCor had cut more than 50 century-old trees at the vast government reservation, saying if that were true, “the streets here should be wider.”

He also dismissed as “old issues” claims that VIP prisoners were allowed to live in “kubol” (huts), instead of in cells with other inmates.

“The kubols have been restructured. In the past, it was used only by one prisoner. Now it’s occupied by six to 10 prisoners,” he said.

‘Taken for a ride’

At the Department of Justice (DOJ), a  lawyer on Monday walked out of a fact-finding investigation into alleged anomalies in BuCor.

Saying he could not stand hearing “nonsensical questions,” an incensed Alan Paguia left the closed-door proceedings presided over by Muntinlupa City Prosecutor Edwin Togonon barely 20 minutes after the investigation started.

Paguia, whose eight-year suspension from law practice for unethical behavior was lifted by the Supreme Court last October,  also accused the DOJ panel of “taking us for a ride” purportedly to protect embattled BuCor Director Gaudencio Pangilinan Jr.

“I wanted to do a Miriam. But I’m no Miriam,” Paguia told reporters,  referring to Senator Miriam Defensor-Santiago’s berating of the prosecution panel last week during the impeachment trial of Chief Justice Renato Corona.

Paguia said he lost his cool when Togonan started “grilling” a BuCor prison guard, Kabungsuan Makilala, on matters not related to the latter’s complaint against Pangilinan.

“This panel is not credible and my evidence is the questions they were asking, which had no connection with (Makilala’s) complaint,” Paguia said.

In his formal complaint, Makilala accused the BuCor chief of entering into a P16-million catering contract with a private company without the approval of Justice Secretary Leila de Lima.

“They were beating around the bush. Sorry. But I cannot stand hearing nonsensical questions. I have no patience for that,” Paguia said.

He also questioned why the investigation was held behind closed doors and insisted the public “has the right to know what’s happening in the proceedings.”

He likewise assailed Togonon for supposedly not answering questions on why Pangilinan did not attend the investigation.