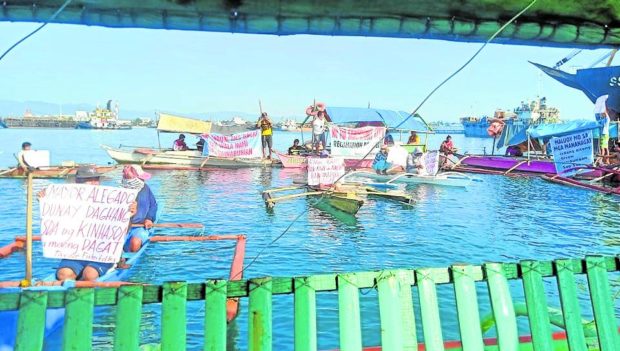 FISHERS’ PROTEST Fishermen and groups supporting them hold a fluvial parade in October 2021 to oppose a reclamation project backed by the local government of Consolacion in Cebu province. —CONTRIBUTED PHOTO (file)

CEBU CITY––The largest international ocean conservation and advocacy organization welcomed the move of the Bureau of Fisheries and Aquatic Resources (BFAR) in Central Visayas to withdraw its decision giving the municipality of Consolacion the go-signal to proceed with its 235.8-hectare reclamation project.

Lawyer Gloria Estenzo Ramos, vice president of Oceana Philippines, said it was proper for BFAR’s regional office to let the national agency decide on the matter.

“This is the first time that a Letter of No Objection (Lono) has been withdrawn by a government agency as there has to be an independent thorough assessment of the impacts of the proposed project to the fisheries, marine habitats, and livelihoods of artisanal fisherfolk and coastal communities,” she said in a statement.

“This is a much-needed significant step in ensuring strict compliance by administrative agencies, including coastal local governments of their legal mandates to safeguard the protection of our coastal and marine ecosystems against serious damage caused by dump-and-fill (projects) and other ecologically destructive coastal development projects,” she added.

In a letter dated March 2, Allan Poquita, director of BFAR-Central Visayas, informed Consolacion Mayor Joannes Alegado that they were withdrawing their Lono, which they issued on June 28.

Poquita said the regional office has no authority to issue a Lono for the application of area clearance, considering the size of the proposed reclamation.

BFAR earlier issued a Lono to the Consolacion reclamation project, attesting that no marine ecosystem would be affected by the proposed project.

But fisherfolk in Consolacion and the neighboring cities of Mandaue and Lapu-Lapu protested, saying they had been fishing in the waters off Barangay Tayud, the proposed reclamation site.

Ramos reminded the government agencies that there were strong legal frameworks and policies in place to compel compliance of local governments with environmental laws, such as the Environmental Impact Statement law, the Fisheries Code as amended, and the Local Government Code.

She also pointed out that the Department of the Interior and Local Government issued Memorandum Circular 2022-018 on February 17 that reminded local governments to closely adhere to their role as “duty-bearer in protecting the environment and defer approval of projects with devastating impacts to the health of our planet and communities.”