In Zamboanga, gym for aspiring Hidilyns struggles to stay afloat 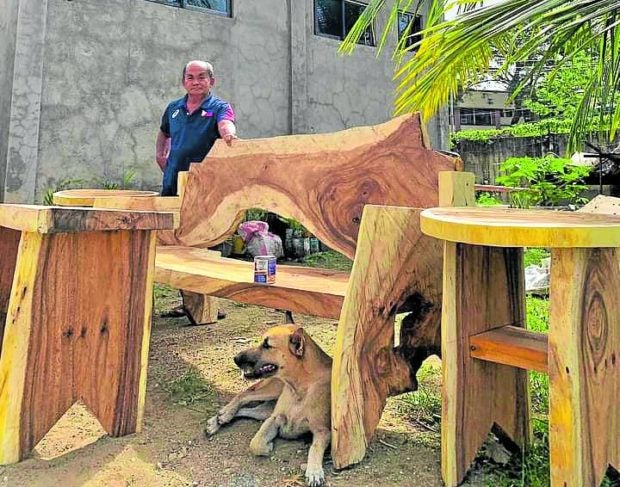 ZAMBOANGA CITY — When not attending to his wards, professional weightlifting coach and trainer Gregorio Colonia scouts for trees that can be a wood source for his growing furniture-making venture.

“I walk around areas where there are planned developments and trees needed to be cut. Sometimes, I see some trees being cut or felled during typhoons or storms. It’s an opportunity for us to raise money,” Colonia told the Inquirer in a recent interview.

Colonia works on the furniture under a mahogany tree near his home where his makeshift weightlifting gym in Barangay Pasobolong is located, some 18 kilometers from the city center.

Colonia, 58, was among those who first trained a young Diaz under a tamarind tree beside her family’s home in this city.

Today, he has chosen 14 children to train in his gym, due to limited space and equipment available. But Colonia plans to accept more trainees once he raises enough money.

He has been supporting the children, who come from families with limited means, and provides their food while they are training.

“My personal allowance (of P1,200 a day) as one of the coaches of the Philippine Sports Commission is not enough to feed more than 10 children. So, I need to look for funds to sustain their needs,” he said.

Colonia turned to the furniture-making skills he learned in Ifugao province in 2009 so he could raise funds. He started the venture in 2010, freeing his gym from dependency on solicitations from politicians.

Now, he wants to level up, targeting to find one or two trees a month so he can produce more furniture sets.

A varnished set sells for at least P8,000, and is composed of a center table, a bench with a backrest, and two small side tables.

“I am grateful that there are private individuals who extend [support to buy] multivitamins and some personal essentials for the children. Sometimes, I feel embarrassed to ask, but we also need to support the children’s dreams,” Colonia said.

READ: Help on its way after Hidilyn Diaz puts spotlight on sorry state of training facilities

Daisy Hunerberg, a Filipina married to a German national, and Al Mitzi Erosido, who is based in the United States, oftentimes extend support to help the 14 young weightlifters under Colonia’s tutelage.

“I see the determination of these children. Hidilyn Diaz’s feat inspired the kids to work out more. These children deserved support, so we try our best to source out anything we can raise from [selling] bath soap, clothes, vitamins, so we can send back to the Philippines to be used by these kids,” Hunerberg said.

Erosido, who was also inspired by the determination of the children, sends cash for the children’s needs.

Some residents, many of them medical front-liners, also extended help, donating vitamins and practice gears like shoes, weights, and clothing.

“We see how determined these children are. Despite having less in life, they are persistent and train hard,” said Christine Lim, a nurse at the City Health Office.

READ: Hidilyn Diaz: A blueprint for success in sports and in life

Colonia is a retired flyweight weightlifter who competed for the country in the 1988 Seoul Olympics in South Korea.

So far, a number of those who began training at Colonia’s gym have gone on to bring glory to the country in the international arena.

Another is Colonia’s daughter, Margaret, an aircraft mechanic who was a silver medalist in the 59-kilogram class during the 2019 Southeast Asian Games.

The day Hidilyn Diaz fetched water for us