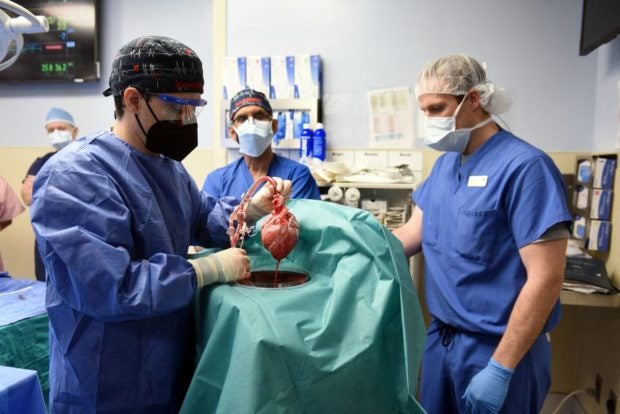 Surgeon Muhammad M. Mohiuddin, MD leads a team placing a genetically-modified pig heart into a storage device at the Xenotransplant lab before its transplant on David Bennett, a 57-year-old patient with terminal heart disease, at University of Maryland Medical Center in Baltimore, Maryland, U.S. January 7, 2022. (University of Maryland School of Medicine /Handout via REUTERS)

WASHINGTON – The first person to receive a heart transplant from a genetically modified pig has died two months after the medical milestone, the hospital that carried out the surgery said Wednesday.

The procedure raised hopes that advances in cross-species organ donation could one day solve the chronic shortage of human organs available for donation, and the team behind the operation say they are “optimistic” about its future success.

David Bennett, 57, had received his transplant on January 7 and passed away March 8, the University of Maryland Medical System said in a statement.

“There was no obvious cause identified at the time of his death,” a hospital spokesman told AFP, adding that physicians were carrying out a review that would be published in a scientific journal. 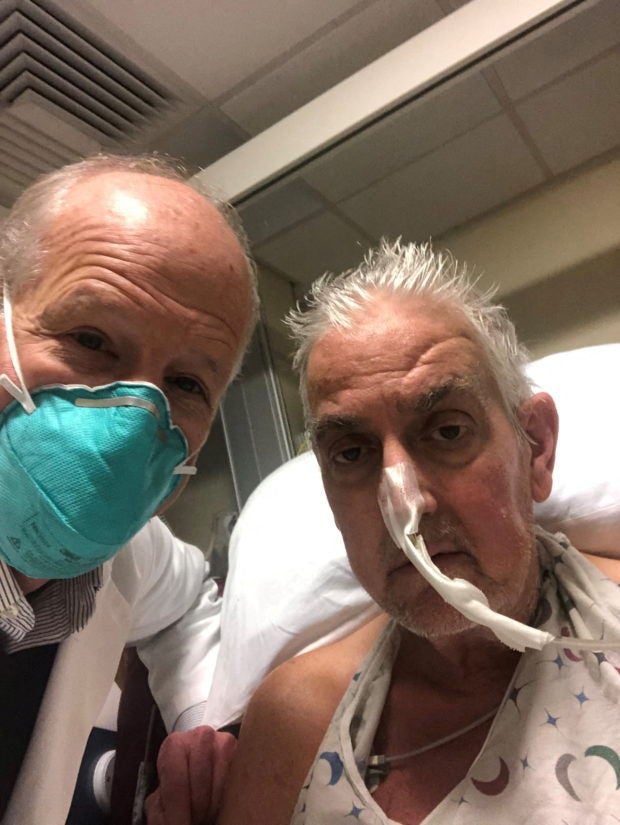 David Bennett, a 57-year-old patient with terminal heart disease, poses with surgeon Bartley P. Griffith, MD before he received a successful transplant of a genetically-modified pig heart at the University of Maryland Medical Center in Baltimore, Maryland, United States, in an undated photograph. (University of Maryland School of Medicine /Handout via REUTERS)

Muhammad Mohiuddin, director of the university’s cardiac xenotransplantation program, did however say in a video statement that Bennett was having “infectious episodes.”

“We were having difficulty maintaining a balance between his immunosuppression and controlling his infection,” he said.

Bennett’s condition began deteriorating several days ago. After it became clear that he would not recover, he was given compassionate palliative care. He was able to communicate with his family during his final hours, a hospital statement said.

Following surgery, the transplanted heart had performed very well for several weeks without any signs of rejection, the hospital added.

Bennett was able to spend time with family, participated in physical therapy, watched the Super Bowl and spoke often about wanting to go home to see his dog Lucky.

“He proved to be a brave and noble patient who fought all the way to the end. We extend our sincerest condolences to his family,” said Bartley Griffith, the surgeon who led the procedure.

Bennett came to the hospital in the eastern US state of Maryland in October 2021.

He was bed-ridden and placed on an emergency life support machine. He had been deemed ineligible for human transplant — a decision that is often taken when the recipient has very poor underlying health.

Mohiuddin said that the team had “gained invaluable insights” from the experience, adding: “We remain optimistic and plan on continuing our work in future clinical trials.”

Reporting in US media also revealed Bennett was convicted of stabbing a man several times in 1988, leaving the victim paralyzed and wheelchair bound before he died in 2005.

Medical ethicists hold that a person’s past criminal history should have no bearing on their future treatment.

About 110,000 Americans are currently waiting for an organ transplant, and more than 6,000 patients die each year before getting one, according to official figures.

To meet demand, doctors have long been interested in so-called xenotransplantation, or cross-species organ donation, with experiments tracing back to the 17th century.

Early research focused on harvesting organs from primates — for example, a baboon heart was transplanted into a newborn known as “Baby Fae” in 1984, but she survived only 20 days.

Pigs make for ideal donors because their organ size is similar to that of humans, they grow rapidly and have large litters. They are also already raised as a food source, so there is less controversy surrounding their organs’ use compared to primates’.

Bennett’s donor pig belonged to a herd that had undergone genetic editing procedures.

Six human genes responsible for human acceptance were inserted into the genome, for a total of 10 unique gene edits.

But while those procedures were carried out on brain dead recipients as proof-of-concept experiments, the surgery on Bennett was the first to actually help a patient who went on to live after the procedure.