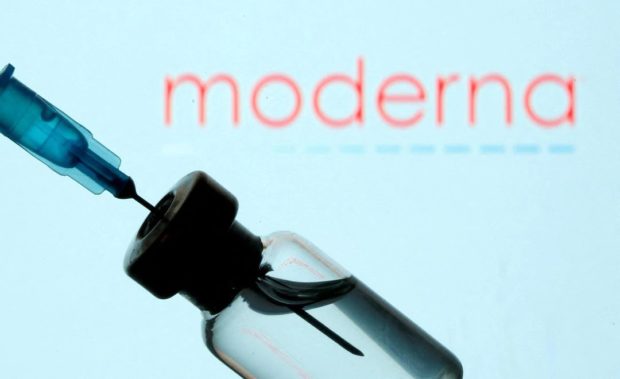 A vial and syringe are seen in front of a displayed Moderna logo in this illustration taken January 11, 2021. REUTERS FILE PHOTO

Moderna Inc (MRNA.O) said on Monday it plans to develop and begin testing vaccines targeting 15 of the world’s most worrisome pathogens by 2025 and will permanently wave its COVID-19 vaccine patents for shots intended for certain low- and middle-income countries.

The U.S. biotechnology company also said it will make its messenger RNA (mRNA) technology available to researchers working on new vaccines for emerging and neglected diseases through a program called mRNA Access.

Moderna announced its strategy ahead of the Global Pandemic Preparedness Summit sponsored by the UK government and the Coalition for Epidemic Preparedness Innovations (CEPI), an international coalition set up five years ago to prepare for future disease threats.

Moderna is already collaborating with partners on vaccines against some of the 15 pathogens, which include Chikungunya, Crimean-Congo hemorrhagic fever, Dengue, Ebola, Malaria, Marburg, Lassa fever, MERS and COVID-19.

Those collaborations include a Nipah virus vaccine with the U.S. National Institutes of Health and an HIV vaccine with the Gates Foundation and the International AIDS Vaccine Initiative, Moderna President Stephen Hoge said in an interview.

The company will either seek out new partners for the others or develop them internally, he said.

Moderna Chief Executive Stephane Bancel told a virtual press briefing on Monday that the 15 viruses are known threats that have not been addressed by many large drugmakers. The COVID-19 pandemic, which has killed six million people worldwide and sickened millions more, has made clear that needs to change, Bancel said.

“Too many lives were lost in the last few years,” he said.

Early in the COVID pandemic, Moderna pledged not to enforce its vaccine patents during the emergency phase of the health crisis.

That has allowed for development of a vaccine manufacturing plant in Africa backed by the World Health Organization as part of a pilot project to give poor and middle-income countries the know-how to make COVID-19 vaccines.

Moderna said it will make that pledge permanent for the 92 low- and middle income countries that qualify for assistance under the COVAX Advance Market Commitment (AMC) led by the GAVI vaccine alliance.

A company spokesperson said Moderna will not enforce patents for COVID-19 vaccines developed in South Africa by WHO-backed Afrigen Biologics for AMC-92 low- and middle-income countries.

Although it will not enforce its patents in these countries, Hoge said Moderna does not intend to share its vaccine technology with the WHO-backed technology transfer hub in South Africa, in spite of lobbying efforts by the organization.

Earlier on Monday, the company said it will set up a manufacturing facility in Kenya, its first in Africa, to produce mRNA vaccines, including against COVID-19.

As part of its future pandemic plan, Moderna intends to make its technology available to academic research labs to test their own theories for vaccines to address emerging and neglected diseases. Hoge said some of these may eventually result in partnerships with Moderna to address the 15 priority pathogens.

“What we want to make sure happens is that scientists who have great ideas for how they could make vaccines will be able to access our standards and technology, almost as if they worked at Moderna,” Hoge said.

Initially, the program will start with a few academic labs, but Hoge expects it to expand rapidly. He sees the program as a way to expand discovery of vaccines using mRNA technology.

“We want to make sure that we allow others to explore the space that frankly, we can’t get to,” he said. “And that’s really what this is about.”

How can we stop the next pandemic? Here’s what WHO panel recommends

Two years into the pandemic, is the end in sight?