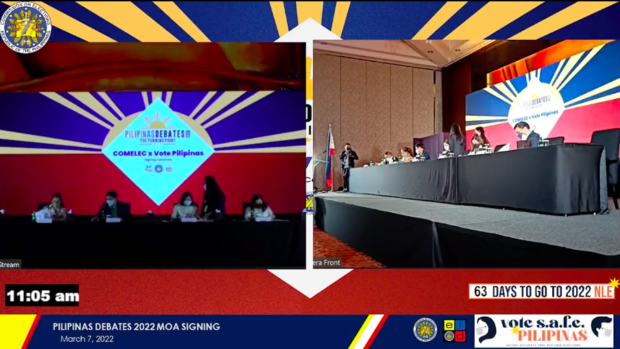 The Commission on Elections and Vote Pilipinas signed a memorandum of agreement on March 7 in Pasay City to stage the Pilipinas Debates. (Screengrab from Comelec’s Facebook page)

MANILA, Philippines — The Commission on Elections (Comelec) and Impact Hub Manila, the group behind Vote Pilipinas, signed a memorandum of agreement on Monday to stage the Pilipinas Debates for the May 9, 2022 elections.

Vote Pilipinas, a nonprofit and nonpartisan organization, is the official voter information campaign partner of Comelec.

“Such is the great importance of making this event a successful one. For this reason, it is crucial for our commission to partner with an organization which is non-partisan and which possesses a proven expertise in holding such a big event,” Comelec Commissioner Socorro Inting said during the signing ceremony in Pasay City.

The presidential and vice presidential debates are slated on March 19 and 20, respectively, and will take place at the Sofitel Hotel in Pasay City.

A second presidential debate is set for April 3, Comelec said.

The debates will run for three hours with a single moderator and no live audience.

The candidate who will answer the first question will be determined through draw lots. Succeeding questions will then be answered by bets in alphabetical order.

The poll body likewise said that there will be Town Hall Debates wherein there will be both remote and in-person audience, and post-debate roundtable, Comelec explained.

The Presidential and Vice Presidential Town Hall Debates, which will follow a double-moderator format, will be conducted on April 23 and 24, respectively.

Inting urged all presidential and vice presidential hopefuls to participate in their organized debates to help voters decide who they will elect in the May 9 elections.

(We invite our candidates to join in our organized debate. Our debate has no other objective but to help our voters know where you stand on various issues that our society is facing and what your plans are to solve these.)