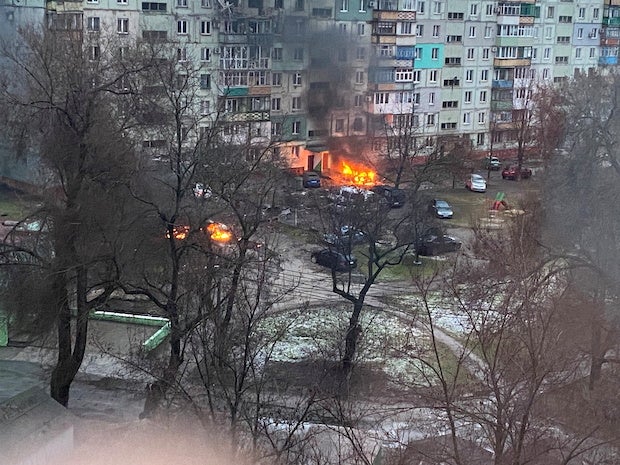 Fire is seen in Mariupol at a residential area after shelling amid Russia’s invasion of Ukraine on March 3, 2022, in this image obtained from social media. (Twitter @AyBurlachenko via REUTERS)

An attempt to evacuate residents from the besieged southern Ukrainian city of Mariupol collapsed for a second day on Sunday, the International Committee of the Red Cross (ICRC) said, blaming an insufficiently clear agreement between the two sides.

“Amid devastating scenes of human suffering in Mariupol, a second attempt today to start evacuating an estimated 200,000 people out of the city came to a halt,” the ICRC said in a statement.

Days of heavy bombardment have left residents of the coastal city trapped without heat, power, and water. The city had about 400,000 inhabitants before Russia launched its invasion of Ukraine on Feb. 24.

Mariupol city council said a convoy of evacuees was not able to depart on Sunday because Russian forces continued shelling despite a ceasefire agreement that was meant to last into the evening. A similar evacuation plan was thwarted by shelling on Saturday.

“It is extremely dangerous to take people out under such conditions,” the city council said in a statement.

Russian news agency Interfax cited an official of the self-proclaimed pro-Russian separatist administration in Donetsk who accused the Ukrainian forces of failing to observe the limited ceasefire.

On Saturday, Mariupol mayor Vadym Boichenko stressed the urgency of getting residents, who have been sheltering in basements, out of the line of fire. Russia’s bombardment of the city for the previous six days has been so heavy emergency services are not able to collect the bodies of those killed, he told Reuters.

The ICRC, which said it was facilitating dialogue but was not a guarantor of any ceasefire, said the failed evacuation attempts “underscore the absence of a detailed and functioning agreement between the parties to the conflict.”

Meanwhile, the Ukrainian authorities said about 400 people fleeing the nearby town of Volnovakha under a similar evacuation plan came under Russian fire on Sunday. They did not say if there were any casualties.

Russia has denied since it began the invasion of Ukraine on Feb. 24 that it has targeted civilians.

Russia calls its actions in Ukraine a “special operation” that it says is not designed to occupy territory but to destroy its southern neighbor’s military capabilities and capture what it regards as dangerous nationalists.

US sees ‘very credible reports’ of attacks on civilians in Ukraine

More than 3,500 detained at anti-war protests in Russia