Kyiv digs in for battle as fighting flares in areas nearby 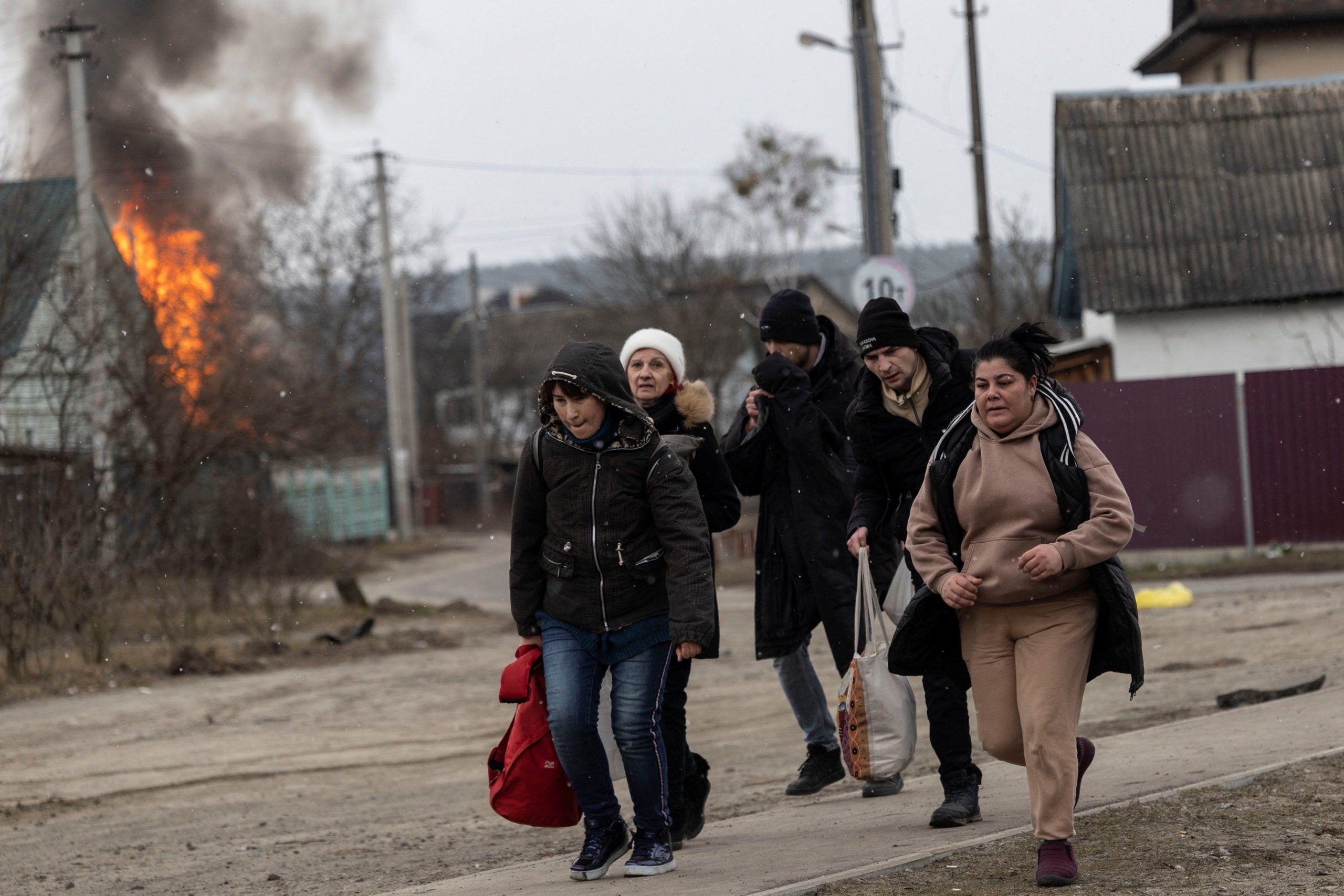 Local residents look for cover as they escape from the town of Irpin, after heavy shelling on the only escape route used by locals, while Russian troops advance towards the capital, in Irpin, near Kyiv, Ukraine March 6, 2022. REUTERS/Carlos Barria

While the armed forces and civilian volunteers dug in, thousands of people continued to try to flee the city of 3.4 million as fears of a full assault spread.

Russia invaded Ukraine on Feb. 24 and has concentrated its heaviest attacks on the south and east of the country, besieging cities including Mariupol and Kharkiv with artillery fire and air strikes and causing extensive damage and casualties.

Kyiv has been spared the worst of the fighting so far, but intense battles have raged in surrounding towns and villages and Russia’s defense ministry released footage on Sunday of some of its tracked military vehicles on the move near the capital.

Video provided by Ukraine’s armed forces taken on Saturday in the Kyiv region, showed Ukrainian efforts to defend the capital, with piles of sandbags and concrete slabs laid across a main road, while Ukrainian soldiers carefully checked passing cars.

A smaller road was blocked by metal “hedgehog” anti-tank barriers, and machine gun positions had been erected. Molotov cocktails were lined up on the side of the road, as civilians vowed to join the battle to protect Kyiv.

“We are equipped 100%,” said an unidentified soldier in the footage. “Positions are prepared, we’ve fitted them out and we are simply waiting to meet them here … Victory will be ours.”

Russia calls its actions in Ukraine a “special operation” that is not designed to occupy territory but to destroy its neighbor’s military capabilities and capture what it regards as dangerous nationalists.

In Irpin, a town some 25 kilometers (16 miles) northwest of Kyiv, men, women and children trying to escape armed clashes in the area were forced to take cover when missiles struck nearby, according to Reuters witnesses.

Soldiers and fellow residents helped the elderly hurry to a bus filled with frightened people, some cowering as they waited to be driven to safety.

The fighting has driven more than 1.5 million people to leave Ukraine for neighbouring countries in the fastest growing refugee crisis in Europe since World War Two, UN High Commissioner for Refugees Filippo Grandi said on Sunday.

Millions more displaced internally are heading for the relative safety of western Ukraine.

Men of a fighting age have been ordered to stay, and Ukrainian President Volodymyr Zelenskiy has called on his people to do what they can to repel the Russians.

She reached a small village 50 km (31 miles) away where her family has a house, and has stayed there with her three-year-old son, Simon, her pregnant sister, who is due to give birth in two weeks and their parents.

“To tell the truth, and it feels like 10 years,” she told Reuters via Zoom of the first 10 days of the war.

“But to tell the truth, I thought I would be even more frightened. Now I feel like a soldier. I feel that I have a lot of energy to just to fight, because I know that we will win.”