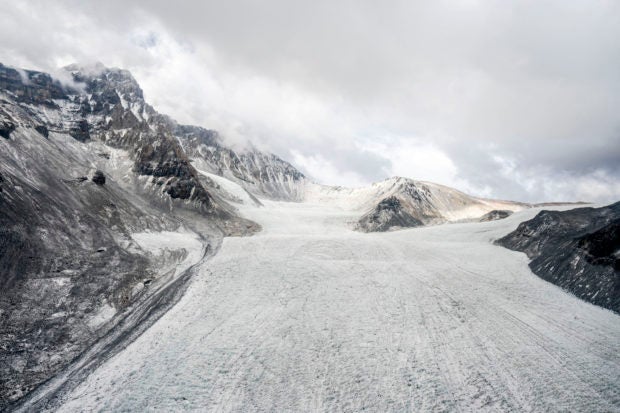 Handout picture released on March 5, 2022, by the Chilean Presidency showing an aerial view of the newly created National Glacier Park in Cajon de Maipo, in the Metropolitan Region of Santiago, some 60 km from the Chilean capital Santiago. AFP

SANTIAGO — Chile said Saturday it is creating a vast national park to protect hundreds of glaciers that are melting due to climate change.

The new National Glacier Park will cover 75,000 hectares of Andes mountain land about 60 kilometers (40 miles) from the capital Santiago, President Sebastian Pinera said at a ceremony announcing its creation.

“We are managing to protect 368 glaciers,” the president said.

These masses of permanent ice hold 32 times more water than a reservoir that serves the capital city’s seven million people, the president added.

A recent study by the University of Chile said glaciers in the central part of the country, which includes the new park, are shrinking due to global warming.

Pinera said establishing the park is “a fundamental step that our country is taking to combat the destruction of nature.”

It will also help preserve flora native to mountain terrain and animals likes pumas and foxes.

Chile is among the world’s top 10 countries as measured by glacier surface area, the government says. Others include Canada, the United States, China and Russia.

Read Next
Canada urges citizens to leave Russia
EDITORS' PICK
In Borongan, nuns play hoops (not mahjong)
PH resumes talks with China on Chinese-funded transport projects
Powered by style, innovation and passion
Why Tagle is a leading papal contender
House energy committee chair Arroyo bats for cheap electricity
A laptop that maximizes your WiFi so you can maximize your productivity
MOST READ
Imee Marcos bares illegal importation of white onions
Why Tagle is a leading papal contender
SRA officials should resign after ‘illegal sugar order’ – Zubiri
My neighbor FVR: From soldier to president
Don't miss out on the latest news and information.