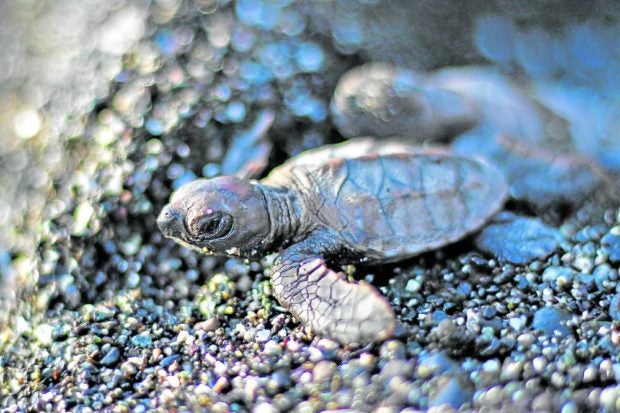 TO THE SEA | A hawksbill sea turtle hatchling crawls to the sea from a nest at Barangay Candiis in Magsaysay, Misamis Oriental province. The critically endangered reptiles have hatched in the town’s coasts again after a yearlong break in 2021. (PHOTO BY ERWIN M. MASCARIÑAS)

MAGSAYSAY, Misamis Oriental, Philippines — After a yearlong break in 2021, hawksbill turtles (Eretmochelys imbricata), locally known as “pawikan,” are hatching again in this coastal town facing Gingoog Bay which is a known habitat of the critically endangered reptiles.

In the first two months of the year, the Community Environment and Natural Resources Office (Cenro) based in Gingoog City recorded 450 hatchlings released to the sea. These were nested on the shores of Candiis, Damayuhan, and San Isidro villages.

“This is the largest recorded so far for the first quarter. Usually, we have them between October and November, then toward December. But those are the times when the weather is not good and usually the sudden change in the tide would flood the nests, killing any hope for the eggs to even hatch,” said Rolando Pagara, a community-based turtle conservationist.

Given this good start for the local marine conservation effort in 2022, Pagara is excited to see how things turn out for the rest of the year. They expect another nest to hatch in April.

The Department of Environment and Natural Resources (DENR) had delineated a 612-hectare coastal zone stretching Candiis, Damayuhan and San Isidro as critical habitat for hawksbill turtles in 2016, boosting initiatives to protect its population and nesting sites. 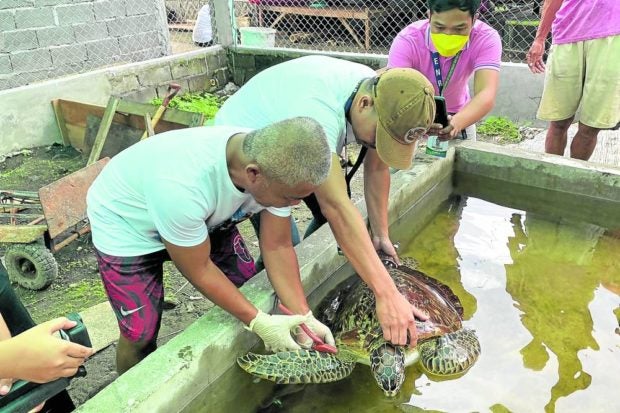 The brain of sea turtles carry an imprint of the beach where they were hatched, hence had the unique ability to return to the same site to nest, repeating what could be an ancient ritual for their species.

The establishment of the conservation zone has contributed to helping grow the population of the turtles. The lockdowns due to the COVID-19 pandemic has practically left the town’s beaches to the turtles, increasing the number of hatchlings released to the sea in 2020.

In 2019, conservationists discovered that rising tides flooded the traditional nesting sites, spoiling the eggs. This prompted them to move the turtle eggs to spots that the tide can’t disturb.

But it was still a puzzle for Pagara and other conservationists why there was not one hatchling produced last year.

Besides Magsaysay, other coasts in Misamis Oriental, many of which are becoming popular tourist destinations, were observed to also be nesting sites of the pawikan.

Cleramie Garcia, chief of protected area management and biodiversity conservation at Cenro Gingoog, said they had been monitoring reports throughout the province of marine turtle sightings and nesting sites. 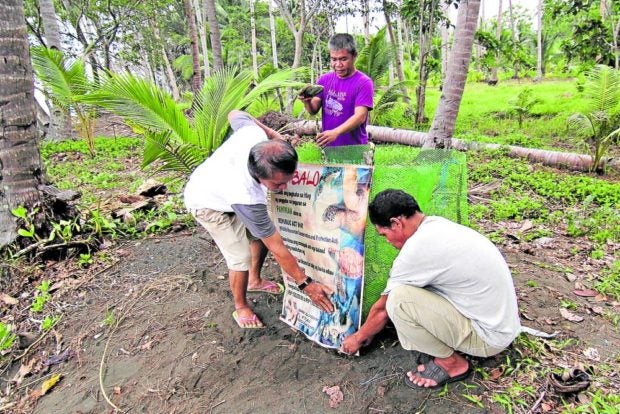 NEST PROTECTION Volunteer community-based conservationists in Barangay Candiis, Magsaysay town, erect a fence around a nesting site to protect hawksbill turtle eggs from dogs, and from being accidentally dug by beachgoers. (PHOTO BY ERWIN M. MASCARIÑAS)

Last year, the Cenro rescued three green sea turtles, one of which bore a tag from Sabah, Malaysia, that unfortunately died a day later, Garcia said, adding that they have increased awareness-raising activities in the communities so more people are enlisted to help protect these reptiles.

Pawikan conservation efforts are also bearing fruit in nearby Carmen town of Agusan del Norte, which is facing Butuan Bay.

On Feb. 28, the Cenro based in Nasipit town released 119 hatchlings of hawksbill turtles.

According to Joseph Leo Oconer of Cenro Nasipit, the hatchlings were found on Dec. 14 in the coastal village of Vinapor.

“We found out that this specific area is where the adult hawksbill turtle usually nests. In the same week in December 2021, we also released 44 hatchlings,” Oconer said.

In 2013, the DENR declared a 5,756-ha coastal zone of Carmen spanning the villages of Vinapor, Gosoon, San Agustin, Cahayagan and Tagcatong as critical habitat for marine turtles.

Gloria Estenzo Ramos, vice president of the environment group Oceana, lauded the locals in Carmen and Magsaysay for keeping the turtle nesting sites in their communities.

She noted that this experience could be an exception as “due to the increase in unregulated coastal developments, several nesting sites of marine turtles are destroyed and eventually lost all over the Philippines.”

“We hope that people, together with the local governments and the DENR, will continue to work for the protection of the turtle habitats,” Ramos said.

Pawikans survived the dinosaur age, threatened to extinction by humans