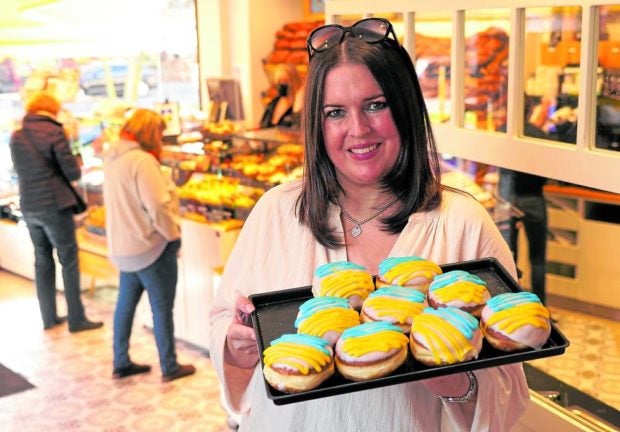 EXTRA PRODUCT, NOBLE CAUSE A bakery in Frankfurt, Germany, has started producing pastry decorated in Ukrainian national colors to raise funds for Ukrainian refugees, especially the children, who have fled the Russian invasion and are seeking refuge in the German city. —REUTERS

BERLIN — A German bakery is selling a “peace donut” to support Ukraine in a sweet way, with the pastries decorated in Ukrainian national colors to raise money for children forced to flee after Russia’s invasion.

As Russia’s campaign in Ukraine enters its second week, leaving hundreds of Ukrainian civilians killed and displacing more than a million, Huck bakery in Frankfurt started offering the donuts on Thursday.

Topped in blue and yellow frosting, the donuts are sold for 1 euro ($1.11) per piece and 100 percent of the money collected will be donated to Ukrainian children seeking refuge in Frankfurt.

“We thought we had to do something very quickly, unbureaucratically,” bakery co-owner Tanja Huck said.

“We decided to … make an extra product that is not that expensive, so it is affordable for everyone and which you can take many with you to the office,” Huck added.

The campaign seems to be successful with 600 pieces sold on Thursday morning at the bakery’s 10 branches and 300 preorders for Friday.

“Yesterday, we only posted it very briefly on social media, then the first orders came in straight away, and by eight this morning most of the branches were sold out,” Huck said.

“We didn’t expect it to be so well received,” she added.

Therese Rinschen-Piechocinski, a Polish woman living in Frankfurt, bought the solidarity pastry and was touched by the campaign.

“If they serve the cause, if they can help the really poor people who are also fighting for us, then I’m ready. I’ve already made a donation,” Rinschen-Piechocinski said.