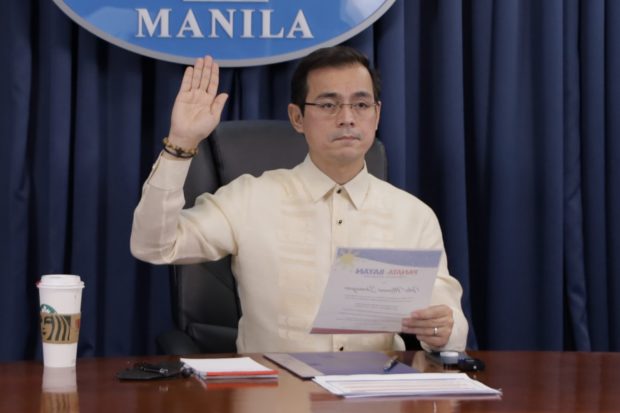 PILAR, Bataan — Amid the Ukraine crisis and uncertainty in the West Philippine Sea, Aksyon Demokratiko standard bearer Isko Moreno Domagoso on Wednesday bared that despite still being a candidate, he is already considering contingency plans to bring home safely the more than 150,000 overseas Filipino workers (OFWs) in Taiwan should crisis suddenly erupt in the island-state that China considers part of its territory.

Moreno told reporters here that he has received information Tuesday that Taiwan’s Ministry of Defense has started distributing “People’s Survival and Evacuation Manual” to the different local government units in preparation for a “crisis” similar to what is happening in Ukraine.

The 47-year-old presidential candidate said that if he were in charge, he will draw up an evacuation plan using the seaports. “I don’t know by air. But by sea it’s reachable since Taiwan is only a few hundred kilometers away from the northernmost tip of the Philippines. So maigi nang makapaghanda tayo.”

Due to Russia’s invasion of Ukraine, Taiwan is currently in a heightened state of alert, nervous that China may try to take advantage of the situation to make a move on the island that is only separated from its powerful neighbor by the 180-kilometer wide Taiwan Strait.

While moving the remaining Filipinos in Ukraine to safety is now of paramount concern, Moreno said it could be done with less complications since Poland has assured Manila that it is ready to accept its affected citizens.

Besides claiming Taiwan as its own territory, China has also made sweeping claims over large parts of the South China Sea, which includes the Philippines’ Kalayaan Group of Islands (the northeastern section of the Spratly Islands) and Bajo de Masinloc (Scarborough Shoal). In July 2016, the Permanent Court of Arbitration at The Hague ruled in favor of the Philippines but China refused to accept the court’s authority.

In a press conference Monday, Moreno pointed out that evacuating a large number of OFWs from Taiwan is a different matter altogether and fraught with lots of complications, making him prepare for the worst possible scenarios just in case.

And being still a candidate does not preclude him from sharing his thoughts to the people, he said. In fact, he sees it as his moral obligation to share to all Filipinos his fears and apprehensions on the matter.

“Kaya I think, kailangan kong i-share, ayaw kong ipagdamot yung personal understanding ko sa sitwasyon. Buhay natin at mga anak natin ito. Kaya ako sabi ko, we have to tell the people. You have to know, you need to know, you deserve to know what’s gonna happen in the next month, years of our lives,” stressed Moreno.

Preparing for worst-case scenarios and acting immediately on it is one of the leadership traits that Moreno possesses that tided over the City of Manila from the worst of the Covid-19 pandemic.

When the pandemic struck, Moreno oversaw the building of the Luneta Covid-19 Field Hospital, and the procurement of life-saving anti-viral drugs, oxygen supply and necessary equipment. Meanwhile, he also ensured the distribution of various social assistance to cushion the socio-economic impact of the pandemic to Manileňos.

And this leadership trait is among his strongest points that he brings into the table as a candidate. “There is so much uncertainty and we must be certain by choosing a leader na certain din sa buhay na may kasiguruhan. That goes to everyone, that includes me. Kailangan ko lamang sabihin sa tao,” he said.

If elected president, Moreno said he will address the perennial problems of poverty, hunger, unemployment, inequality and social injustice in the country by focusing on providing the minimum basic needs of the people – housing, education, health care and jobs – through the efficient and prudent management of government resources. These form the main pillars of his 10-Point Bilis Kilos Economic Agenda.

And Moreno’s “Filipino First” foreign policy is part of his agenda to protect all Filipinos, here and all over the world. “While it is true, we recognize treaties and agreements, and I respect that, but first things first, Filipino first. Mga kababayan muna natin. Dahil yun ang pangunahing trabaho ng isang Presidente,” he said.

Isko Moreno willing to give aid to OFWs returning from Ukraine