Putin’s war on Ukraine and impact on PH prices 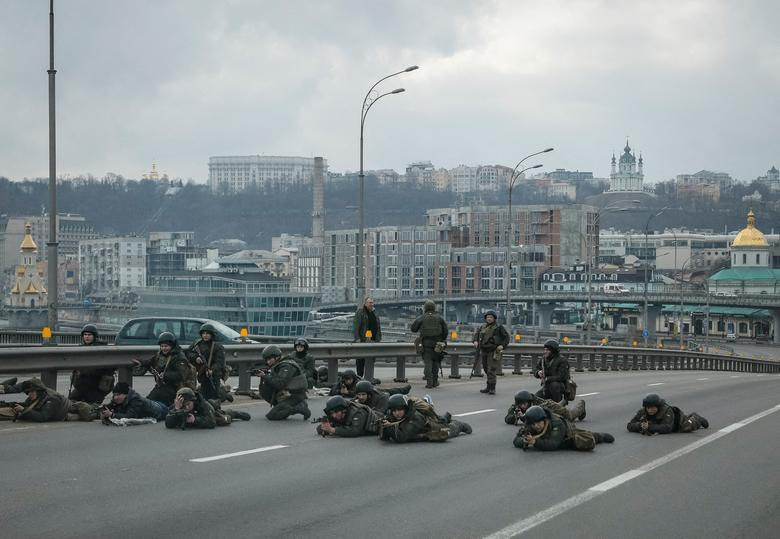 “The purpose of this operation is to protect people who, for eight years now, have been facing humiliation and genocide perpetrated by the Kyiv regime,” the Russian dictator said in statements hit by the West for misinformation and lies.

“To this end, we will seek to demilitarize and deNazify Ukraine, as well as bring to trial those who perpetrated numerous bloody crimes against civilians, including against citizens of the Russian Federation,” he added.

The United States of America (US), the European Union (EU), and other countries have since imposed sanctions on Russia—including Putin and Russian banks. 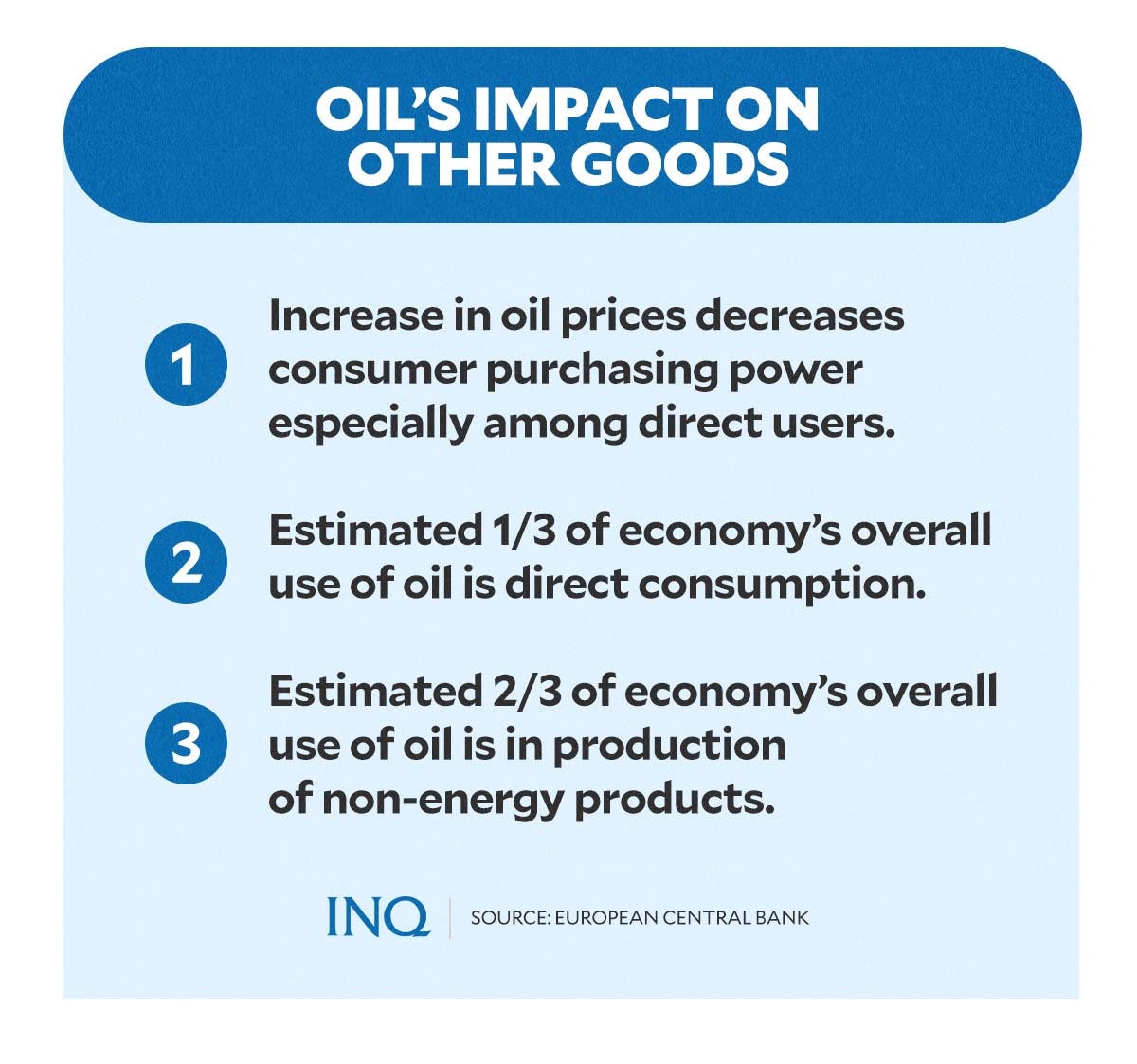 On Feb. 28, high-level talks between Kyiv and Moscow concluded, with no agreement reached except to talk again.

Ahead of the talks, Putin has ordered Russian nuclear forces put on high alert, dramatically escalating the tension with the US and the North Atlantic Treaty Organization (NATO).

With war unleashed by Putin on Ukraine continuing for nearly a week now, more than 400,000 Ukrainian refugees have fled to neighboring countries. 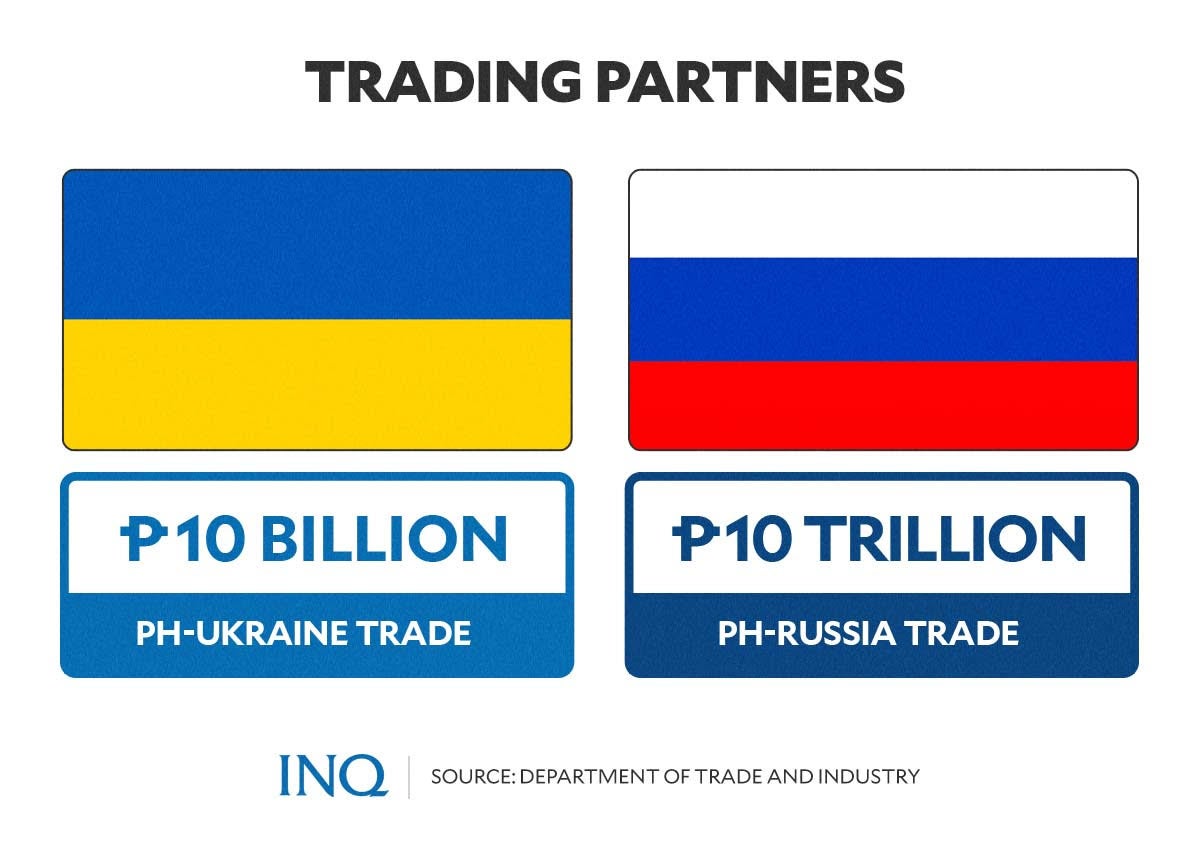 The impact of the war, however, has also started creeping in on other countries across the globe as prices of oil shot up as a result of the ongoing attacks amid financial sanctions imposed by US and Western allies.

In this article, INQUIRER.net will detail the financial impact of the Russia-Ukraine conflict on the Philippines.

On Feb. 14, Sen. Panfilo Lacson urged the government to prepare for a possible economic fallout as a result of the war between Ukraine and Russia.

“We might think that Ukraine is far away and that there is no danger for the Philippines. [But] we are all living in a global village,” said the chair of the Senate national defense and security committee.

“An invasion of Ukraine may adversely affect the stock markets all over the world. Prices of basic commodities and fuel may increase. We need to be prepared for this, not to mention that we are still suffering from the pandemic and are far from economic recovery,” Lacson said in a statement.

Prior to Russia’s announcement of the invasion of Ukraine, Trade and Industry Secretary Ramon Lopez said growing tension between Russia and Ukraine was likely to have minimal impact on Philippine trade.

But he emphasized that it will cause disruptions in global supply and prices of oil.

What Lacson and Lopez anticipated to be the impact of the Russia-Ukraine war on global oil turned out to be spot-on. 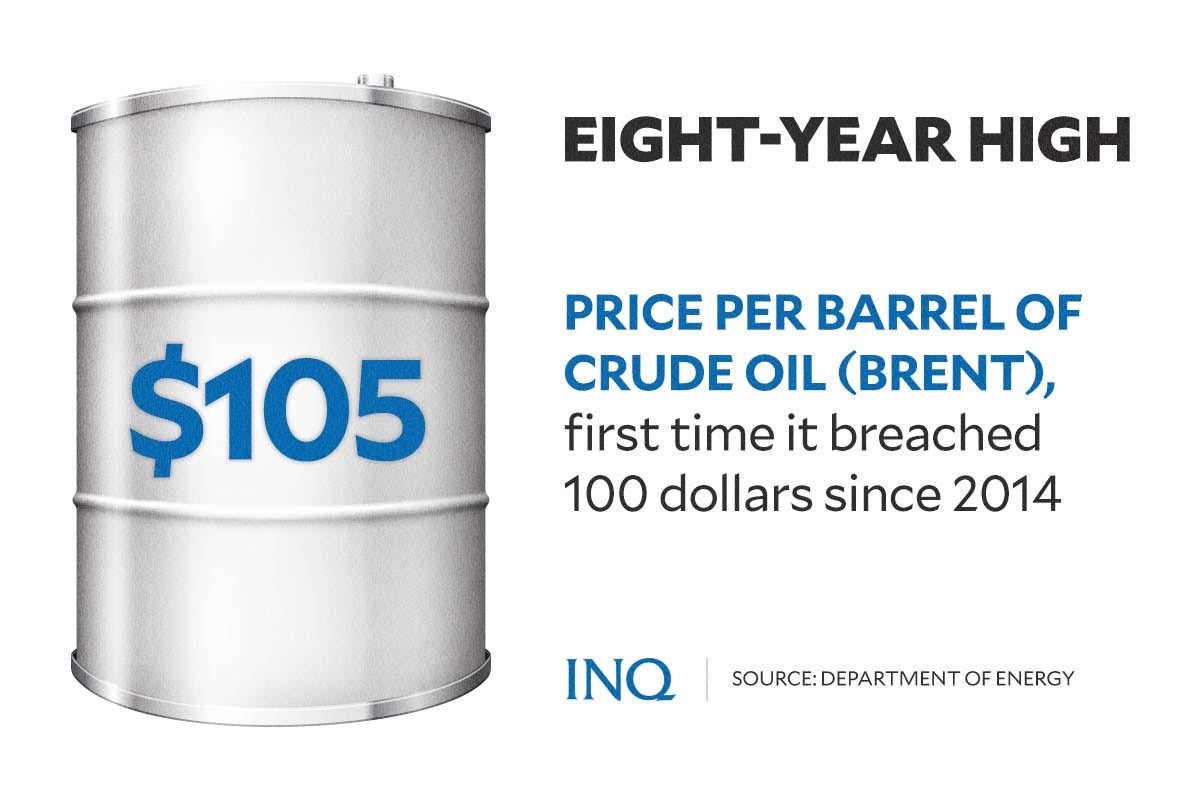 Following Putin’s order to invade on Feb. 24, prices of the global benchmark Brent crude oil soared past $100 a barrel for the first time in more than seven years.

Brent crude futures surged to $102, while Dubai crude, the reference price for the Asian market, was more than $91 per barrel.

Russia accounts for 12 percent of global oil and 24 percent of natural gas production.

Early last month, the Department of Energy (DOE) said that the Philippines does not buy oil directly from Russia. However, the country’s trading partners including China, South Korea, and Japan purchase from Russia.

In a television interview, Rina Abad, DOE-Oil Industry Management Bureau director, said the Philippines could suffer an indirect hit in case of oil supply disruptions as a result of the war.

According to data from the Observatory of Economic Complexity (OEC), Russia exported crude petroleum to the Philippines, amounting to $96.2 million. 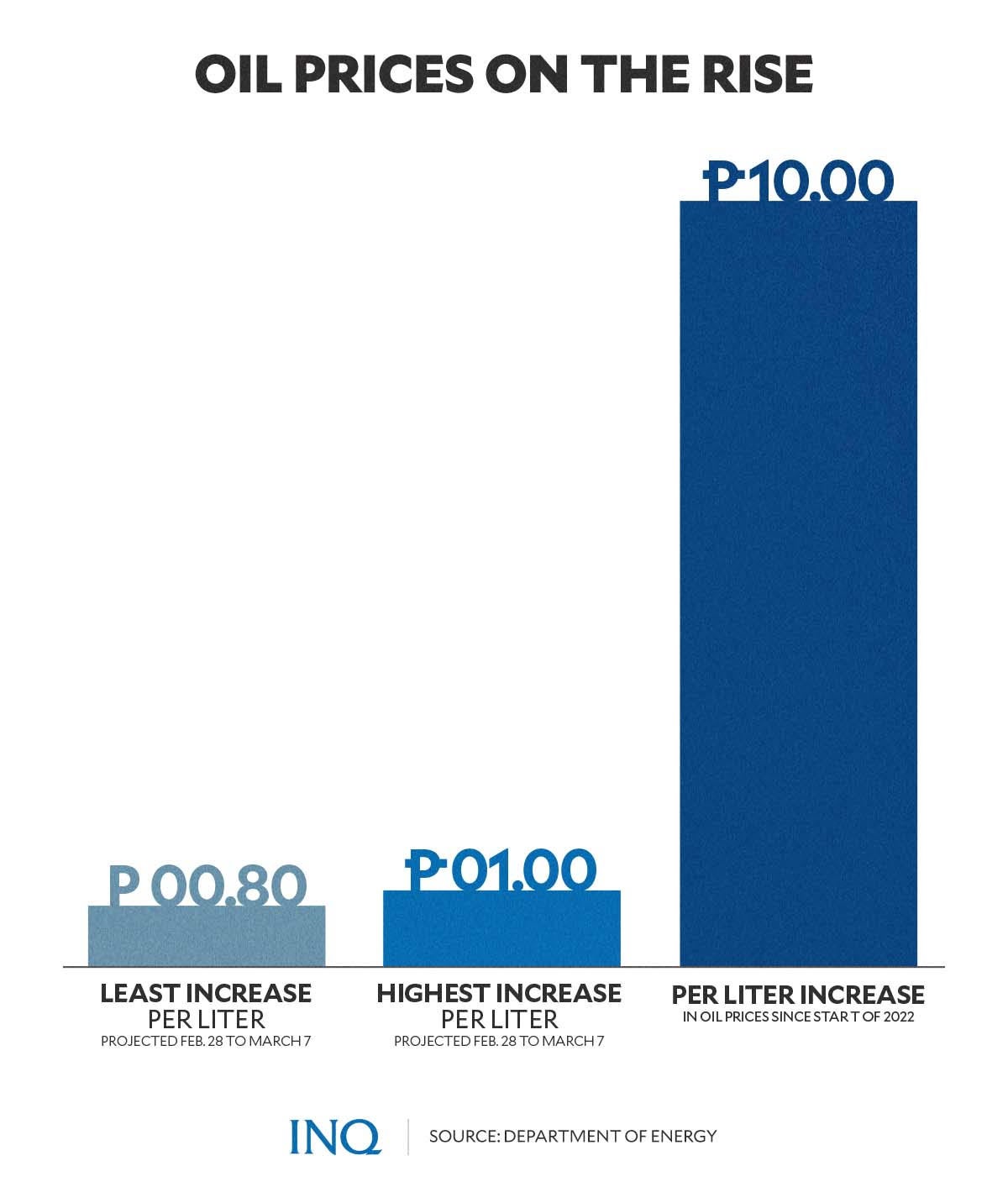 While the energy department has assured early on that oil supply issues might not directly hit the country amid the ongoing war, experts said the rising price of global oil will.

“While we don’t see significant disruption to oil supply in the near term as the Philippines has existing oil contracts and does not import oil directly from Russia or Ukraine, a prolonged conflict between Russia and Ukraine will weigh on the Philippines’ other trading partners, thus having a spillover effect on supply-chain and oil prices, putting upward pressure on inflation,” said Moody’s Analytics associate economist Sonia Zhu.

One of the immediate impacts of war in Ukraine was on pump prices of petroleum products in the Philippines.

Following global oil price hikes as a result of the escalating crossfire between Russia and Ukraine, local oil prices have started to spiral.

The spike in global oil prices, according to experts, could lead to even higher local pump prices. 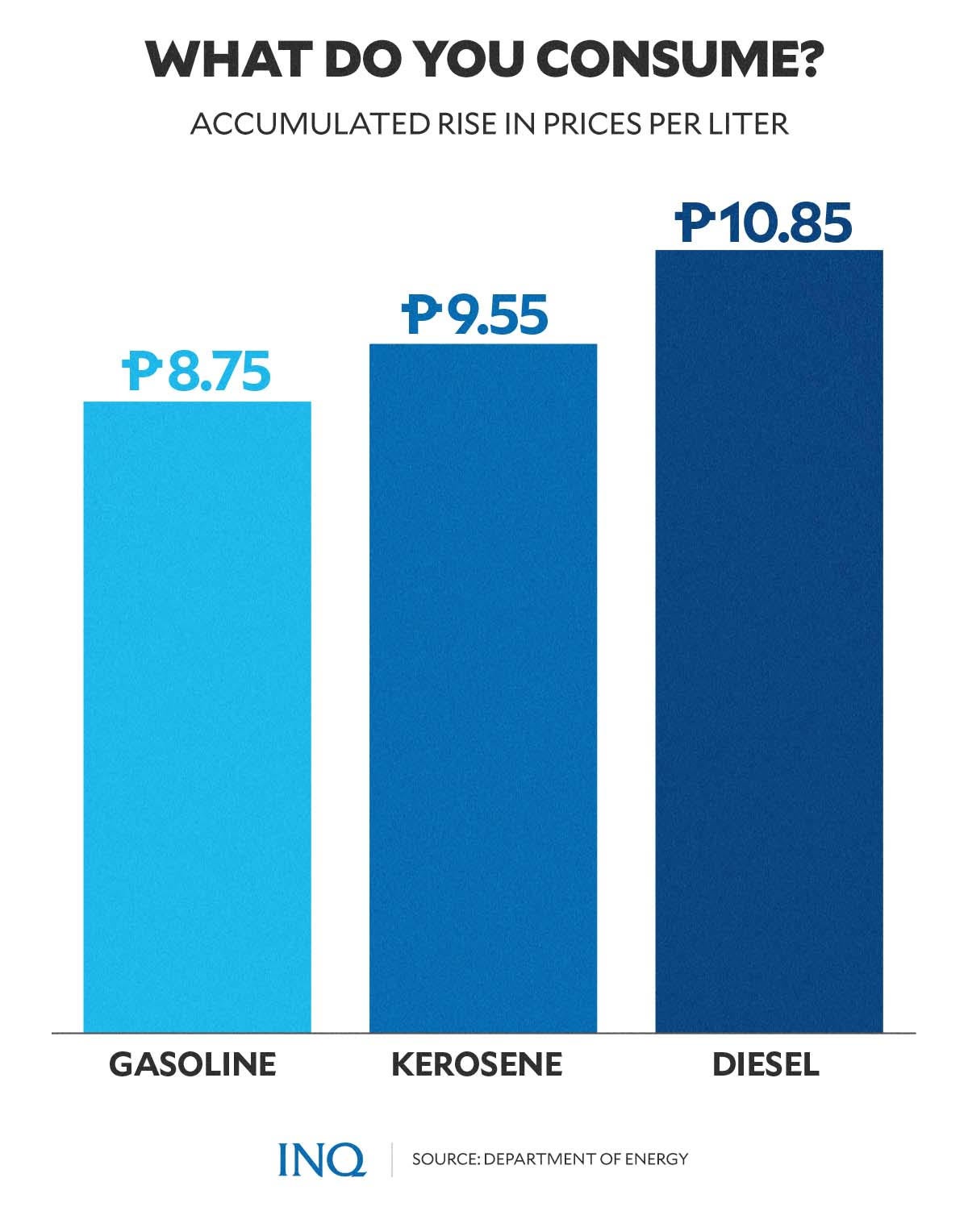 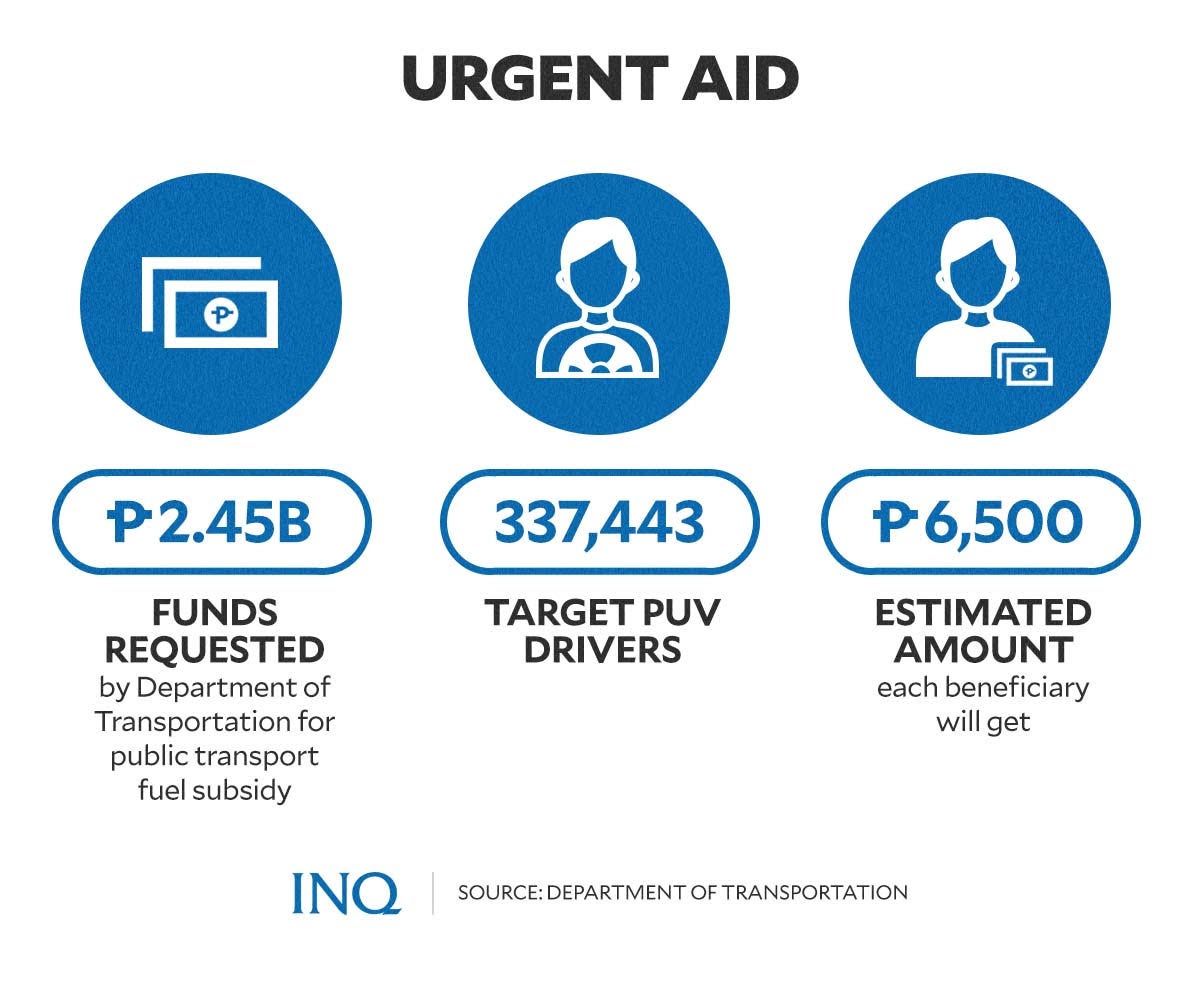 “We have to act fast to provide relief to our people in the wake of soaring gas prices, which have now increased by more than P20 per liter due to the COVID-19 pandemic and the heightening tensions between Russia and Ukraine and its western allies,” Anakalusugan Rep. Michael Defensor said in a statement last week.

House Deputy Minority Leader and Bayan Muna Rep. Carlos Isagani Zarate also called on President Rodrigo Duterte to call for a special session of Congress to approve the suspension of the tax on oil for at least six months. 1-Pacman Rep. Mikee Romero also made the same call to the President.

The war between Russia and Ukraine also impacted global supply and prices of agricultural commodities, like wheat and soybean—among the products imported by the Philippines from the two countries.

“The main inflationary impact of the Russia-Ukraine conflict is through higher commodity prices, particularly oil and wheat. If the conflict does not get resolved soon and consequently lead to elevated oil and wheat prices for the most part of 2022, then the average inflation for the year will be likely closer to our upside forecast of 4.1 percent,” Philippine National Bank (PNB) economist Alvin Arogo said.

In an interview with CNN Philippines, Security Bank AVP and chief economist Robert Dan Roces said on Feb. 24 that the costs of agricultural commodities imported by the Philippines—like wheat and soybean—have already gone up.

“All these could likely transmit into local prices with the cost being transferred towards local consumers,” Roces said.

Still, the Department of Trade and Industry (DTI) assured that the increase in prices of basic commodities will not be immediately felt by the public.

“[W]e will not immediately feel it and the consumers can be rest assured that all manufactured food products are being studied by the DTI. We validate then negotiate if the price is too high for consumers,” Trade Undersecretary Ruth Castelo said last week.

She added that the agency has yet to receive any request to adjust retail prices due to fuel concerns.

“[W]e have not yet received any additional or new request for price increase due to fuel,” Castelo added.

To summarize, how exactly do rising prices of oil and agricultural commodities impact the Philippines?

Former National Economic and Development Authority (NEDA) director-general Cielito Habito explained in his latest column published on INQUIRER.net that the changes in global economy and markets, as a result of the indirect impact of the Russia-Ukraine war and the sanctions imposed by Western countries, will have an impact on the Philippines, too.

“With Russia and Ukraine together producing about a quarter of the world’s wheat, this is one commodity whose global flows and prices will be affected by the war-induced disruption of supplies from these two major producers,” said Habito.

“Thus, even though we might readily source from elsewhere the wheat imports lost from Ukraine suppliers, the likely spike in world wheat prices will raise the price of flour, hence bread and other baked goods,” he added.

The adjustment in the price of agricultural commodities could also push up the price of animal feeds, which Habito said could result in higher meat prices.

“The world is in for elevated food prices over the following months, which for us had already been happening in the past year due to our own internal problems with steep declines in livestock and fisheries supplies,” he said.

To cushion the impact of the Russia-Ukraine war on the Philippines amid the rising prices of oil and agricultural commodities, the government said it will release P3 billion in subsidies.

The committee said it is preparing to release P2.5 billion for the Fuel Subsidy Program of the Department of Transportation (DOTr).

“This aims to provide fuel vouchers to over 377,000 qualified PUV drivers who are operating jeepneys, UV express, taxis, tricycles, and other full-time ride-hailing and delivery services nationwide,” the DBCC said.

Another P500 million will also be allotted to the Department of Agriculture (DA) to provide fuel discounts to farmers and fishermen.

“This will help mitigate the impact of elevated fuel prices on production and transport costs of farm and fishery products,” the DBCC said.

As of Feb. 26, the DBCC said it is preparing guidelines for the release of the fuel subsidies for both the transportation and agricultural sectors.

The committee said it was ready to disburse P2.5 billion for fuel subsidies on top of P500 million for farmers and fisherfolk, but Malacañang said it would be up to the Department of Budget and Management (DBM) to interpret the law.

The General Appropriations Act of 2022 provides funds to bankroll fuel subsidies to the transportation and agriculture sectors, but only if crude oil prices reach $80 per barrel for three consecutive months.

“We requested the DBM in the last meeting with [LTFRB chair Martin Delgra] that it be liberal in the interpretation because the spirit of the law is to cushion [the] effect of the fuel price hike,” executive director Maria Kristina Cassion said

“Maybe we can be liberal in the three-month rule that Congress is saying we have to follow,” she said, noting that marginalized sectors are already feeling the impact of higher fuel prices.

The Bureau of Fisheries and Aquatic Resources (BFAR) has announced that it has earmarked P250 million for transport assistance for fishers.

“The [Department of Agriculture]-BFAR is in the process of thoroughly developing guidelines for the implementation of this initiative and we expect to immediately distribute assistance to our fishermen once these guidelines are developed,” BFAR Director Retired Commodore Eduardo Gongon said.

As the public waits for the release of the subsidies, which could help cushion the impact of spiraling oil prices following Russia’s invasion of Ukraine, several lawmakers have suggested oil price hike mitigations.

“The conflict has started to jack up oil prices to unprecedented levels and it is therefore imperative that the downstream oil industry be again placed under regulation to protect our much-burdened consumers,” Zarate said in a statement on Feb. 27.

“Yet, the Duterte administration remains deaf on this call of our people,” he added.

As attacks by Putin’s army on Ukraine continue, experts expect the impact on prices of oil and major commodities to follow.

Still, the DTI said the country’s trade with Russia and Ukraine would remain.

“We continue commercial relations with Russia, Ukraine, and the West,” said Lopez.

He also clarified that the ongoing war between the two countries has not created any changes on the Philippines-Russia Joint Commission on Trade and Economic Cooperation.

According to Lopez, Ukraine is the Philippines’ 40th trading partner, with around P10 billion ($200 million) worth of trade.

The Philippines’ trade with Russia, on the other hand, amounts to around P10 trillion ($2 billion).