Why it matters: How Putin’s invasion of Ukraine could impact PH | Inquirer News 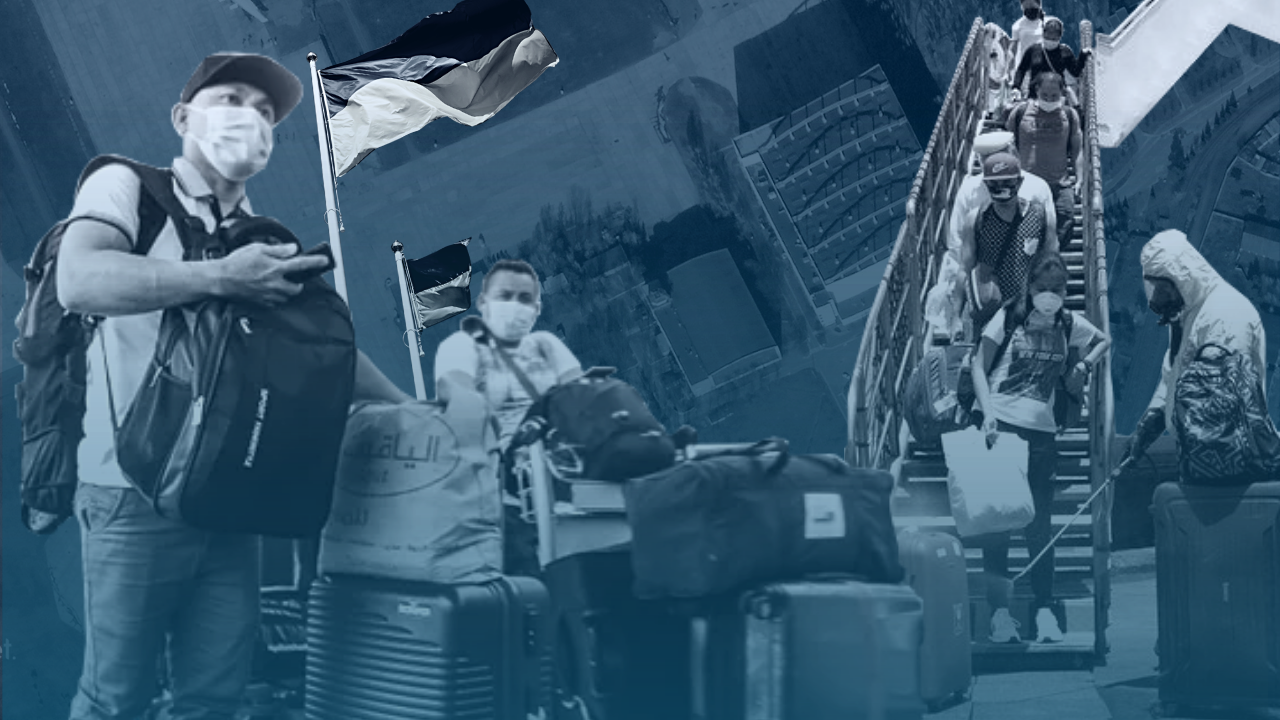 MANILA, Philippines—The impact of Vladimir Putin’s invasion of Ukraine is slowly but steadily making itself felt in the Philippines.

First, Filipinos working or living in Ukraine are now reported to be among the hundreds of thousands seeking paths to safety as Putin’s army barrels its way into the Eastern European nation.

Next, an effort by the Philippine Bureau of Treasury (BTr) to borrow more funds for government expenses by selling treasury bills was stymied by high interests demanded by buyers as a result of war jitters.

Third, the Philippine stock market felt the war’s nudge, falling slightly shortly before and after Putin launched his war of aggression.

Fourth, the war unleashed by Putin on Ukraine is drawing attention to defense deals that the Philippine government either concluded or is concluding with the Russian government involving helicopters and supersonic missiles built by an Indian-Russian joint venture.

Putin’s war started on Feb. 24 when he announced the invasion of Ukraine, couched in his euphemism for aggression—“special military operations.”

On Feb. 28, Putin upped the ante, declaring that he has placed his nuclear deterrent force in “special combat readiness.” The use of nuclear bombs is part of the Russian military doctrine, according to experts.

Estimates from a United Nations relief agency reported 240 civilian casualties and at least 64 deaths, including children so far. However, it noted that the real numbers were likely “considerably higher”.

READ: Ukraine and Russia: What you need to know right now

According to Ukraine’s health ministry, as of Feb. 27, at least 352 civilians, including 14 children, have been killed as attacks by Putin’s army continued.

In this article, INQUIRER.net will briefly detail some of the potential impacts of Putin’s war on Ukraine on the Philippines as the bloodshed unleashed by the Russian dictator continued to escalate.

On Feb. 16, a week before Russia’s announcement of a “military operation”, Philippine Foreign Affairs Secretary Teodoro Locsin Jr. assured the safety of Filipinos in Ukraine.

“Rest assured Filipinos in Ukraine will come to no harm. I will be on top of it personally,” Locsin said in a tweet.

He said his current out-of-town work is not getting in the way of his task of personally supervising the safe passage of Filipinos out of the war zone.

“I’m done in Cambodia in 2 days; then ASEAN-EU in Paris by 19th. That’s close enough to Ukraine to effect their safe passage out,” Locsin said.

“Russian Belgograd & Kursk are closest; from west—Poland, Hungary, Slovakia; south— Romania & Moldova border Ukraine but farther from Filipinos in Kyiv than Russian Kursk. Making calls now. Anybody feel like whining stay away from this,” he added.

READ: Locsin assures no harm will come to Filipinos in Ukraine

According to Locsin, there are at least 140 to 350 Filipinos in Ukraine’s capital Kyiv, the city being targeted for capture by Putin supposedly to decapitate the Ukrainian government and establish a Russian puppet administration.

On Feb. 18, days before Russian troops pushed into Kyiv, six Filipinos from Ukraine had already returned to the Philippines.

Following Putin’s announcement of the invasion of Ukraine on Feb. 24, Locsin said Poland has agreed to take in Filipinos even without a visa.

“Warsaw PE’s (Philippine Embassy) been on high alert; repatriated a few; Poland finally agreed to let ours in sans EU visas; not heard anything from Russia on our request re: its closest border,” the Philippine foreign affairs chief said.

“Most Filipinos in Ukraine are grateful guests and want to stick it out with their warm welcoming neighbors,” he added.

The Philippine Embassy in Poland has jurisdiction over Filipinos in Ukraine. 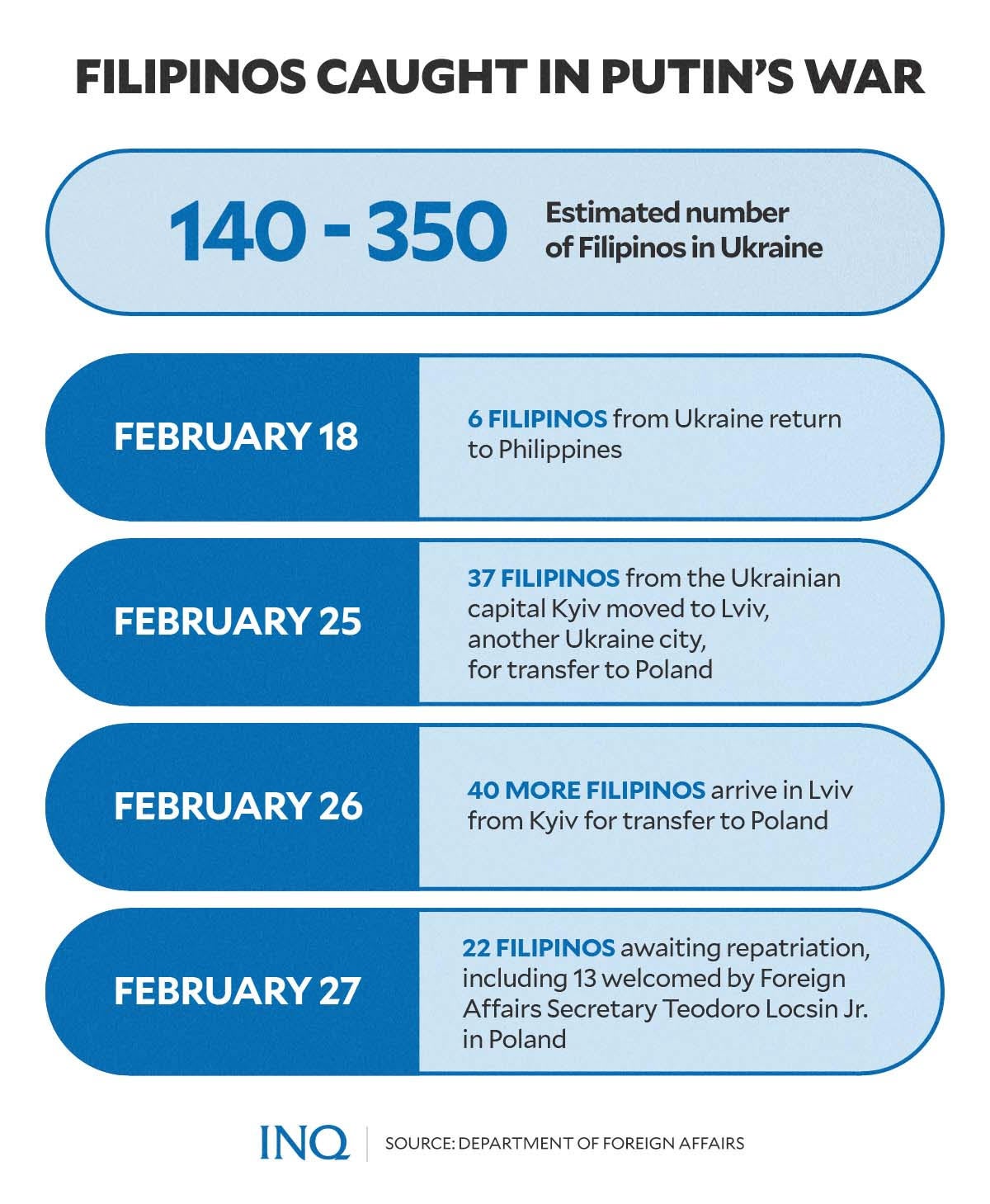 On Feb. 25, the Department of Foreign Affairs (DFA) reported that 37 more Filipinos from Kyiv have been transported to Ukraine’s western city of Lviv, from where they will be transported to the border of neighboring Poland.

The following day, the DFA confirmed the arrival of over 40 Filipinos from Kyiv to Lviv, and added that “more Filipinos are expected to arrive in Lviv in the coming days.”

On the same day, the third day of Putin’s attempt to subjugate Ukraine, Locsin arrived in Poland and was briefed about the situation on the ground.

As of Feb. 27, the DFA said there were 22 Filipinos still awaiting repatriation.

Among these were 13 displaced Filipinos who evacuated from Ukraine to the Rava-Ruska-Hrebenne Border Crossing Station in Poland, where they were welcomed by Locsin.

Five Filipinos waiting to be repatriated were in Moldova, and four in Lviv, said the Philippine foreign affairs department. 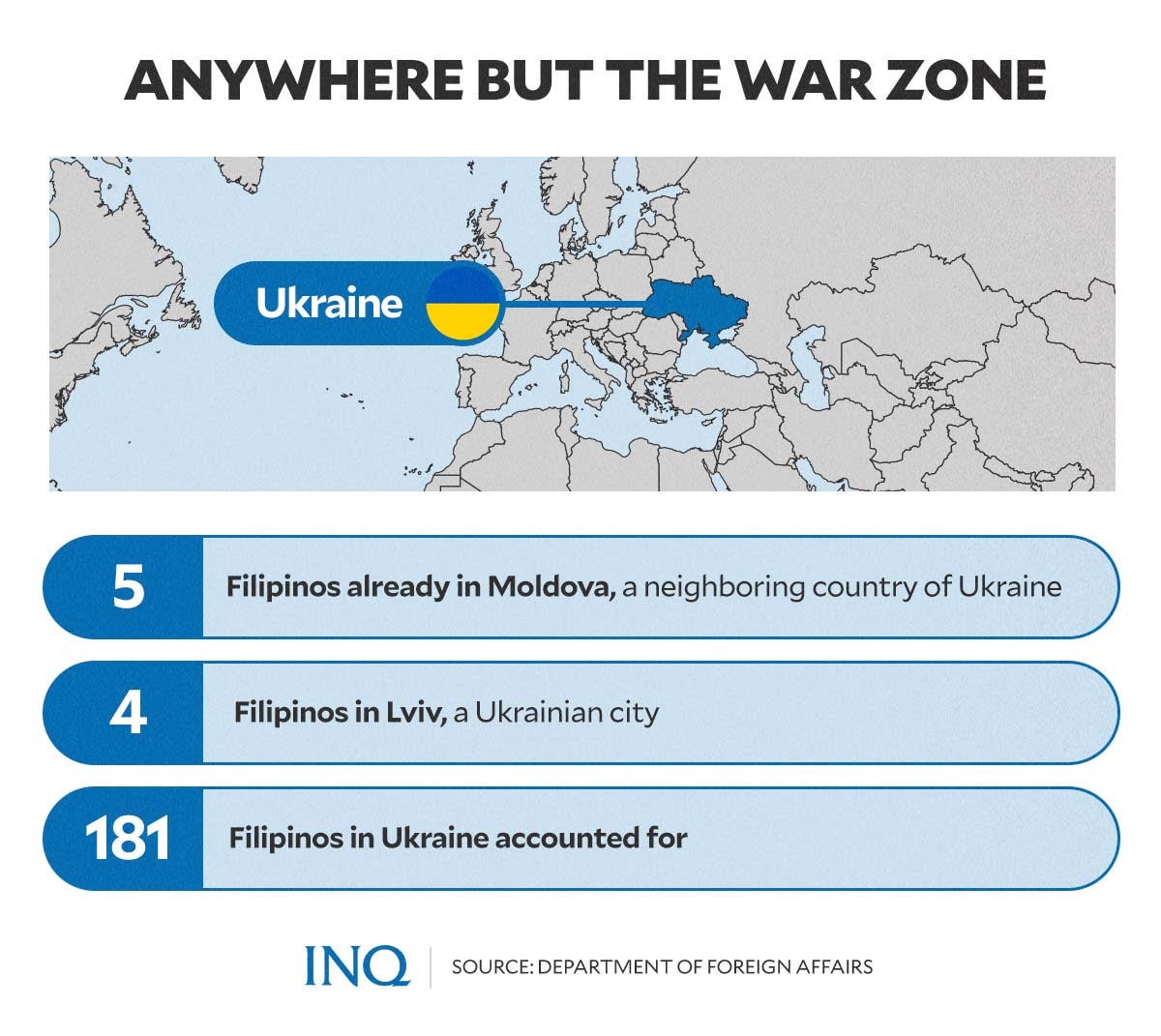 The DFA earlier said 181 Filipinos in Ukraine were accounted for but government records showed there were at least 380 Filipino workers in Ukraine.

Filipinos in Ukraine who needed repatriation assistance were advised to reach out to the Philippine Embassy in Poland through the following contact details:

According to the latest estimates by the United Nations, over 400,000 refugees from Ukraine have crossed neighboring countries, while reports showed more individuals who remained stuck in the country with nowhere to go amid the ongoing war.

As conflicts continued to transpire, several countries—including the United States of America (US), the United Kingdom (UK), Japan, as well as the European Union (EU)—took unprecedented steps to strike at the heart of the Russian economy through crippling sanctions.

Among these sanctions include a series that targeted the ability of Russian banks to transfer or transact funds.

Here’s a quick rundown of the financial sanctions imposed by the US and its allies so far:

Moreover, US, Canada, and EU countries, including the UK, France, Germany, and Italy, recently announced that they would expel some Russian banks from the SWIFT financial messaging system—a move that has been suggested by several US lawmakers, world leaders, and Ukrainian officials.

SWIFT is a Belgian financial messaging service, previously known as the Society for Worldwide Interbank Financial Telecommunication, which securely connects over 11,000 financial institutions across the globe.

SWIFT does not hold or transfer funds. Instead, it informs banks and financial institutions around the world of transactions about to take place, such as rapid cross-border payments.

Since it allows seamless and secure international fund flow, involving the transfer of trillions of dollars each year, it was considered the principal mechanism for financing international trade.

“This will ensure that these banks are disconnected from the international financial system and harm their ability to operate globally,” said the US, European Commission, France, Germany, Italy, UK and Canada in a joint statement released by the White House on Feb. 27.

“We commit to imposing restrictive measures that will prevent the Russian Central Bank from deploying its international reserves in ways that undermine the impact of our sanctions,” the allies added.

The US, Europe, and Canada likewise pledged to prevent Russia’s central bank from deploying its $630 billion stockpile of international reserve.

According to a report by The Wall Street Journal, this move by the US and its Western allies would directly target Russia’s so-called rainy day fund that “President Vladimir Putin has built up in recent years to help insulate Russia’s economy from outside pressures.”

Japan recently joined the US and EU in cutting off Russian banks from SWIFT.

“The bottom line is that these sanctions will have a significant impact on Russia’s overall economy and average Russians will feel the cost,” Clay Lowery, executive vice president for the Institute of International Finance (IIF), explained. 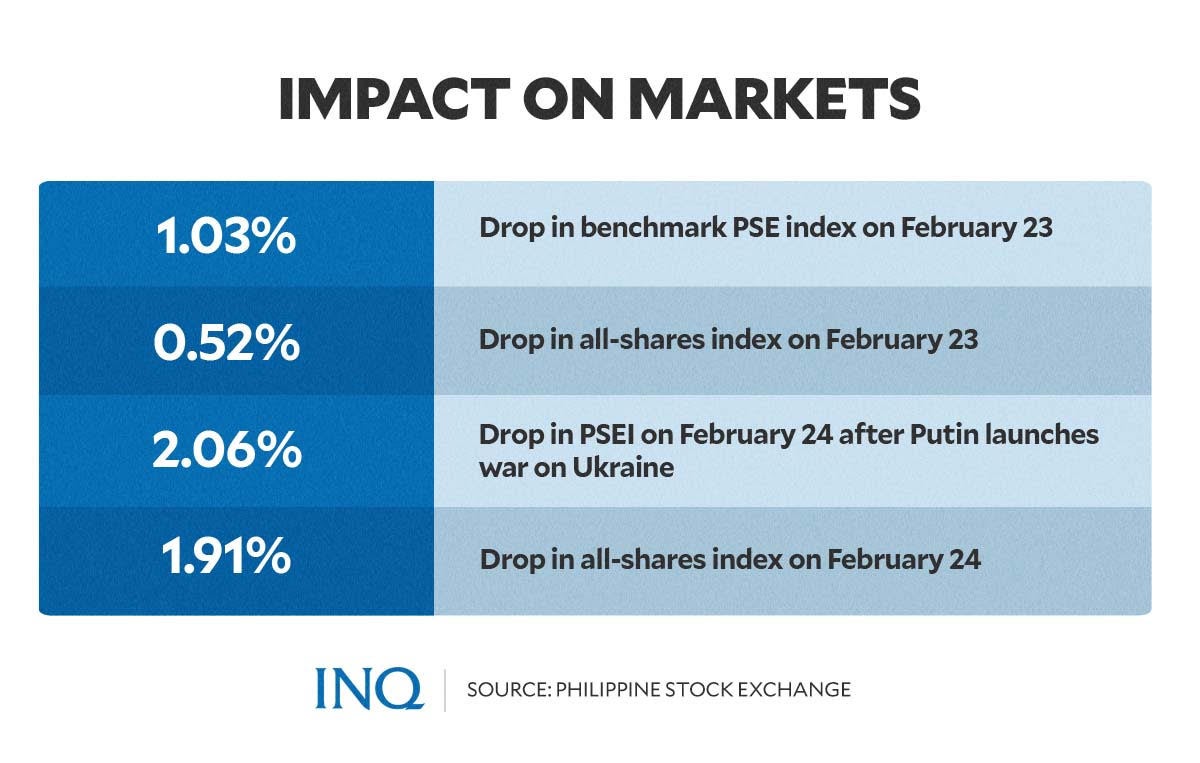 On Feb. 28, the Bureau of the Treasury (BTr) declined T-bills—a total of P18.5 billion in tenders across three tenors—as rates shot up caused by several factors, including the war brought by Putin to Ukraine.

It is not yet clear whether the Philippines will feel an impact from the financial sanctions imposed on Russian banks.

Russia’s largest online bank, Tinkoff—which applied for a license in the Philippines last year as part of its international expansion—remains unscathed from the sanctions and was not included on the list of Russian banks sanctioned by the US.

However, while the bank’s system continued to run smoothly, its London listed shares fell by 45 percent amid the Russia-Ukraine conflict.

“Tinkoff has sufficient liquidity,” said Tinkoff, which is not state-owned but among the 13 systemically important banks in Russia, according to the Russian Central Bank.

Amid Putin’s war on Ukraine, there are still pending defense deals between Russia and the Philippine government.

In December, Defense Secretary Delfin Lorenzana reported that the down payment for the Russian heavy-lift helicopters acquired by the Philippine Air Force (PAF) will soon be released.

“That is a big helicopter,” he added. 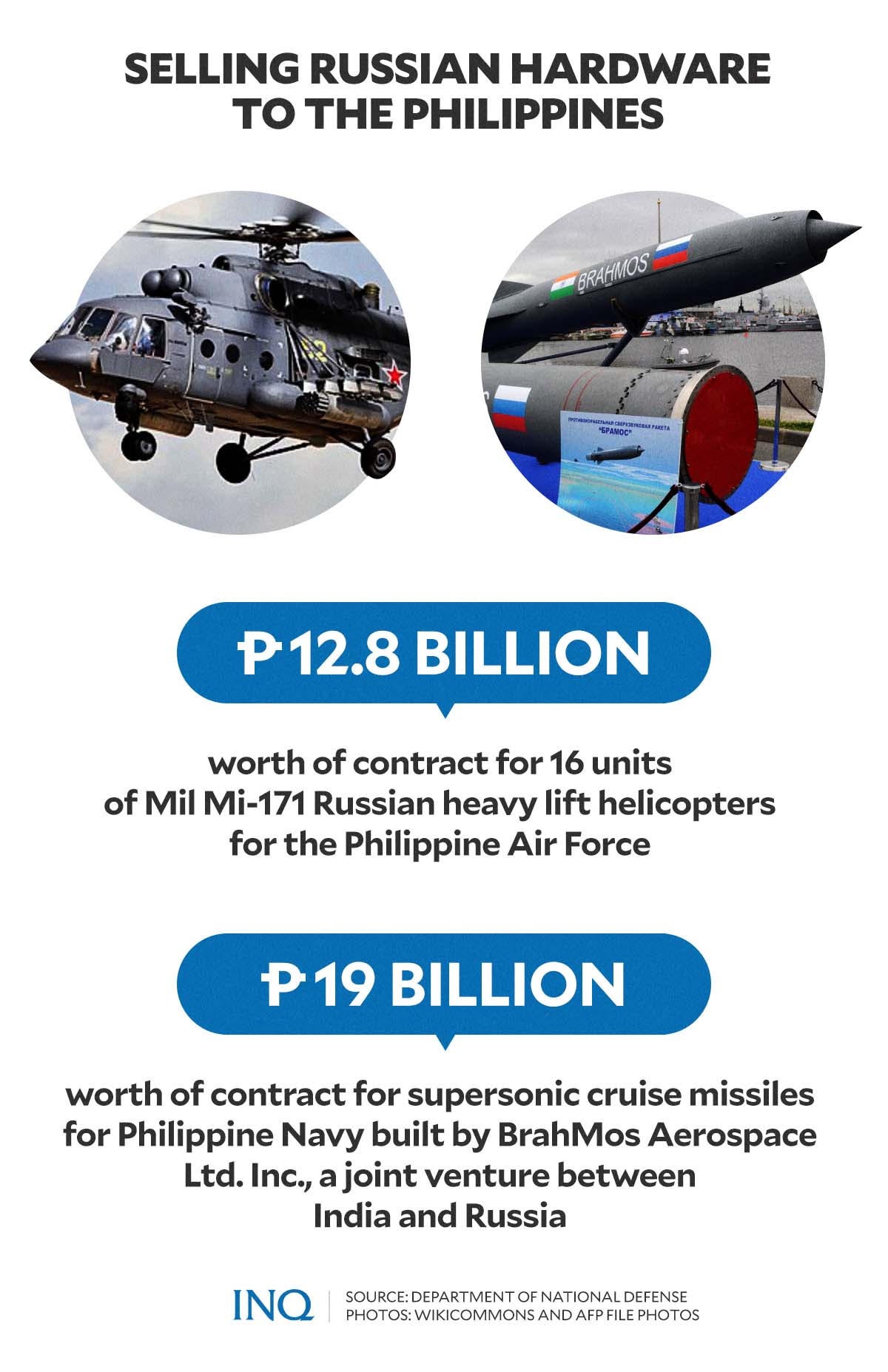 READ: US sanctions could kill PH plan to get heavy-lift choppers from Russia

The government has also awarded a P19 billion contract to India to equip the Philippine Navy with the world’s fastest supersonic cruise missiles.

On Dec. 31, Lorenzana said he signed the notice of award to BrahMos Aerospace Private Ltd., an Indian-Russian aerospace and defense joint venture.

The project, which was negotiated with the Indian government, includes the delivery of three batteries of BrahMos missiles, training for operators and maintainers, as well as the necessary integrated logistics support package.