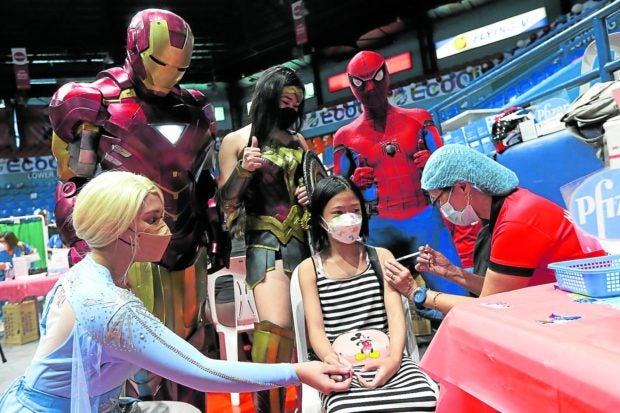 GOT YOUR BACK Cosplayers in superhero costumes assist children getting their COVID-19 vaccine shot at Filoil Flying V Arena in San Juan City, assuring them that everything will be alright. San Juan joined other local governments in Metro Manila during this week’s launch of the vaccination drive for kids age 5 to 11. —NIÑO JESUS ORBETA

MANILA, Philippines — The Philippines’ COVID-19 vaccination rate has slowed down, possibly because the country has already reached the “peak” of the population that needs to be vaccinated, a government adviser said Tuesday.

Dr. Ted Herbosa, special adviser to the National Task Force Against COVID-19, pointed out that the government fell short of its target in the recent national vaccination days held earlier this month.

“Our vaccination rates have slowed down. We used to be vaccinating 500 (thousand) to a million a day. Even with the last national vaccination days when we did that Bayanihan, Bakunahan last February 11, what happened was we did not reach the five million. We only got 3.5 million of the target,” he said in an interview with ABS-CBN News Channel’s Headstart.

Asked about the possible reason for the decreasing rate of vaccination, Herbosa said: “We might be reaching the peak of the people we need to vaccinate, so that’s part of the factor.”

He said that in previous national vaccination days last year, the number of individuals who were vaccinated was close to the government’s target.

“In our first two Bayanihan [Bakunahan] in November and December, we reached our target or close to our target, but this one was slowing down, so we might be at that peak of the curve where we are actually plateauing with the vaccination,” he noted.

“We saw this also in other countries. Other countries like the US also had a plateau after a very strong start of vaccination. So we need to increase that,” said Herbosa.

The country has so far vaccinated over 63 million Filipinos against COVID-19, according to vaccine czar Secretary Carlito Galvez Jr.