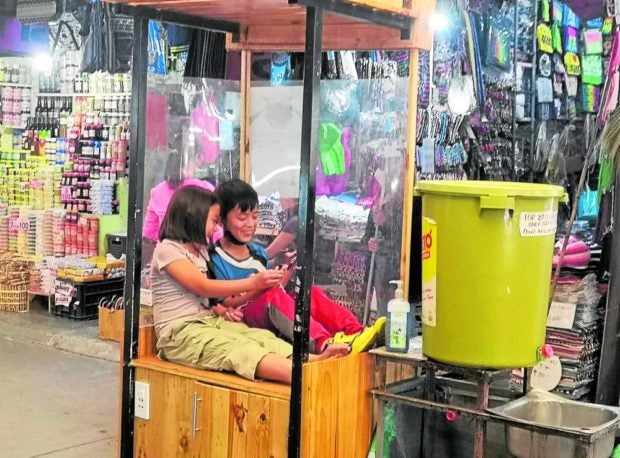 TIME TO RELAX | Children, seen here at play in Baguio City’s public market on Monday, are the first to enjoy an easing of public restrictions now that the city has moved to alert level 1 from March 1 to March 15. (Photo by EV ESPIRITU / Inquirer Northern Luzon)

BAGUIO CITY, Benguet, Philippines — Regulations that control public movement will slowly be eased in the city, which is expecting a surge of tourists for the Baguio Flower Festival to kick off on March 6 while under the most lenient Alert Level 1, Mayor Benjamin Magalong said on Monday.

The city has lifted the cap on daily tourist entries, but only to allow the government to determine the appropriate threshold for daily guests, Magalong said.

The mayor said they were considering to eventually put a 20,000 daily cap for leisure travelers entering the city but would not just drop health regulations as Baguio veered closer to a “new normal.”

The full reopening of the city to leisure travelers would not be rushed, the mayor said on the sidelines of the week’s flag-raising ceremony.

Travelers are still screened through the city online registry or the Visitor Information and Travel Assistance online platform.

He said the city government would give the private sector the leeway to maintain their own screening restrictions, such as serving only fully vaccinated customers, to protect other clients and their staff.

Baguio, which has been placed under the most relaxed alert level 1 category from March 1 to March 15, used to allow only about 2,000 tourists to enter the city toward the end of last year, which was increased to 5,000 in January until it was halted last month when COVID-19 cases surged due to the highly contagious Omicron variant.

As of Sunday, the city was only left with 151 active COVID-19 cases, out of the 41,376 infections it recorded since the pandemic struck in March 2020.

Magalong said the 20,000 per day visitors’ ceiling would not seriously affect local health as well as impact Baguio’s carrying capacity.

Magalong said open-air facilities might cater to clients at full capacity, adding that gradual increase in approved capacity for indoor enterprises was being considered.

Restrictions on intermunicipal travel have been relaxed, although neighboring Benguet province remains under alert level 2. Magalong said he had endorsed the application of bus companies wishing to resume routes to and from Baguio.

The latest request which he supported came from the Solid North bus company, which intends to reopen trips to the city from Cagayan Valley and Central Luzon.

“We need to find out if the influx of this many people can be tracked. Will we manage this many people at convergence areas like the market and shopping malls? Are they in areas with good air quality?” Magalong said.

The city’s smart city command system has crowd counting capabilities, which will be useful for establishing how many people the city can accommodate without disrupting the comfort of residents.

The city is also bracing for more tourists in summer and the Holy Week break in April.

Baguio flower fest to resume in March, after 2-year hiatus