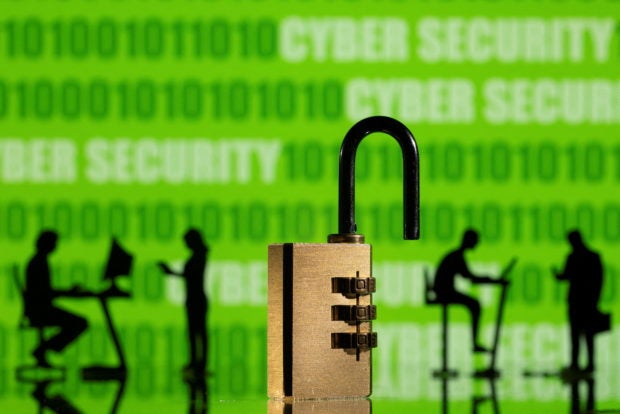 3D printed models of people working on computers and padlock are seen in front of a displayed CYBER SECURITY words and binary code in this picture illustration taken, February 1, 2022. (REUTERS/Dado Ruvic/Illustration)

“We are creating an IT army,” Fedorov wrote in a Tweet that linked to a channel on the Telegram messaging app which published a list of prominent Russian websites.

“There will be tasks for everyone. We continue to fight on the cyber front. The first task is on the channel for cyber specialists,”

Kremlin.ru, the official website of the Kremlin and the office of Russian President Vladimir Putin, was taken offline on Saturday in an apparent distributed denial of service (DDoS) attack.

Malicious data-wiping software was discovered circulating in Ukraine last week, hitting hundreds of computers, according to researchers at the cybersecurity firm ESET.

Suspicion fell on Russia, which has repeatedly been accused of hacks against Ukraine and other countries. The victims included government agencies and a financial institution.

Britain and the United States said Russian military hackers were behind a spate of DDoS attacks last week that briefly knocked Ukrainian banking and government websites offline before the Russian invasion.

Russia has denied the allegations.