France pushes to bar Russia from SWIFT as Germany brakes 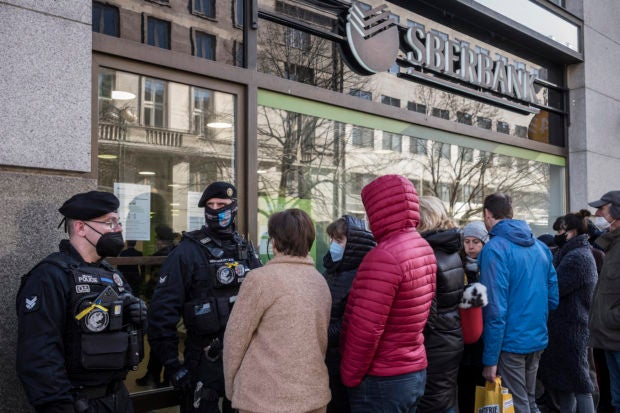 Police guard the bank’s entrance as people queue outside a branch of Russian state-owned bank Sberbank to withdraw their savings and close their accounts in Prague on February 25, 2022, before Sberbank will close all its branches in the Czech Republic later in the day.  US President Biden was the first to announce sanctions, hours after Russian President Putin declared a “military operation” into Ukraine. The first tranche will hit four Russian banks — including the country’s two largest, Sberbank and VTB Bank — cut off more than half of Russia’s technology imports, and target several of the country’s oligarchs. (AFP)

PARIS – French Finance Minister Bruno Le Maire on Friday pushed for Russia to be excluded from the global SWIFT interbank system over its attack on Ukraine, supported by other EU nations but facing a more cautious Germany.

“Some (European Union) member states have shown reservations, France is not one of these states,” Le Maire told reporters after a meeting of EU finance ministers in Paris — while describing the move as a “financial nuclear weapon”.

He added that SWIFT exclusion would be weighed “not in the coming days or weeks, but in the coming hours”, with technical advice from the European Commission.

While Le Maire received public backing for the move from other nations including Austria, German Finance Minister Christian Lindner resisted the high-pressure timetable without ruling out an exclusion altogether.

“I advised that we should also look into instruments that go beyond even the latest sanctions package, that includes SWIFT,” Lindner told reporters in Paris, while adding that he “can’t say anything about the timeframe”.

“If we come to this exclusion, will that then be the trigger that causes Russia to halt its gas deliveries, because they can no longer be paid for?” he asked.

But Lindner added that “for someone to ask the question about consequences does not mean that they are not ready to bear them”.

Russian gas makes up a higher share of energy supplies in Germany and other parts of Europe than in France, although Paris has itself vowed to protect citizens from upward pressure on prices due to the Russian attack.

Le Maire and Lindner had earlier praised the joint EU response to Moscow, saying that sanctions already decided would “isolate Russia financially” and “cut all links between Russia and the global financial system”.

Lindner insisted that “we already have a complete blockade of Russian banks, which means business dealings with Russia are as good as stopped.”

Reacting Thursday to sanctions decided by the EU, Britain, the United States and other Western nations, Ukrainian President Volodymyr Zelensky said “the pressure on Russia must increase” from what has already been announced.

“Not all possibilities for sanctions have been exhausted yet,” he added.

Foreign Minister Dmytro Kuleba had been more explicit Thursday, writing on Twitter that “who now doubts whether Russia should be banned from SWIFT has to understand that the blood of innocent Ukrainian men, women and children will be on their hands too.”

SWIFT’s messaging system allows banks to communicate rapidly and securely about transactions, and cutting Russia off would cripple its ability to trade with most of the world.

Iran has been disconnected from the system in the past over its nuclear programme, while Moscow has been developing domestic financial infrastructure to counter just such a threat, including the SPFS system for bank transfers and the Mir card payments system.

Cutting off Russia could complicate remaining trade with Europe, including natural gas imports vital to the continent’s energy supply as well as oil shipments.

Berlin this week said it would halt certification of a new pipeline bringing gas from Russia known as Nord Stream 2, but an existing direct link remains in operation and payments continue to flow.

Asked about other reported exemptions from the economic measures against Russia, including for Italian luxury goods and Belgian diamonds, Lindner said that “it would not be rational to consider measures that in the long run would weaken our ability to exert political influence.

“The aim is above all to affect Russia and aim for effects on Russia”.

Read Next
Robredo upbeat on chances in Iloilo: Ilonggos voted wisely in 2016
EDITORS' PICK
Heads may roll at BOC, says Palace if sugar smugglers are allowed to use recycled import permits
What to watch out for when selecting a video surveillance solution
Palace: Biggest supermarkets in PH commit to sell sugar at P70 per kilo
House energy committee chair Arroyo bats for cheap electricity
vivo brings to the Philippines a powerful smartphone with a slimmer body, the vivo Y02s for only PHP 6,499
Climate change impact: Deadlier diseases
MOST READ
DepEd to give teachers P5K cash allowance within first week of classes
Alyssa Valdez to miss Creamline’s AVC Cup campaign
Mayor bares issues vs closed QC school
DOJ indicts bank officer in $2.1 billion Wirecard fiasco
Don't miss out on the latest news and information.