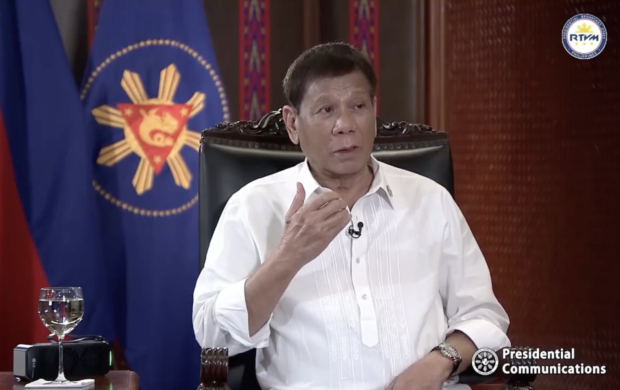 MANILA, Philippines — Four months before he ends his term, President Rodrigo Duterte admitted on Friday that most Filipinos did not want the government to shift to federalism.

Duterte, speaking in an interview with Presidential Communications Secretary Martin Andanar, acknowledged that Filipinos are not ready for a federal form of government.

(The Filipino people are not ready. It is not accepted. Those advocating for federalism think I did not do anything. You are wrong. Every now and then, I call the mayors. Even before, I have been going to places and talking to people.)

However, the people are “not enamored” with the idea, said Duterte.

But four months before he steps down, Duterte said he eventually gave up on pursuing this effort under his term because it was a “futile endeavor.”

Nevertheless, he clarified that he did not procrastinate in pursuing a shift in the government system.

“Until the six years are over, ayaw talaga (they still don’t want it). So hindi na lang ginawa (we did not do it). Sinabi ko sa kanila, ayaw ng tao. Ayaw ng tao (I told them that the people don’t want it),” he reiterated.

According to Duterte, Filipinos were afraid that local officials could have more scope of governance if federalism was implemented.

“Natakot sila na may more expanded powers ang, kasi you would always equate it with the local struggle, who’s the best to run. And if these guys are given a more expanded governance, medyo hindi nila naintindihan o ayaw nilang tanggapin,” he said.

(They were afraid that officials would have expanded powers, because you would always equate it with the local struggle and who’s the best to run. And if these guys are given a more expanded governance, the people did not want to understand it or accept it.)

“Masabi ko ‘yan dahil yung governors pati mayors, hindi naman ito mga ano, usually may utak talaga, ayaw. So I give it up. It was a futile endeavor,” he added.

(I can say that because governors and mayors are smart but don’t want it. So I give it up. It was a futile endeavor.)