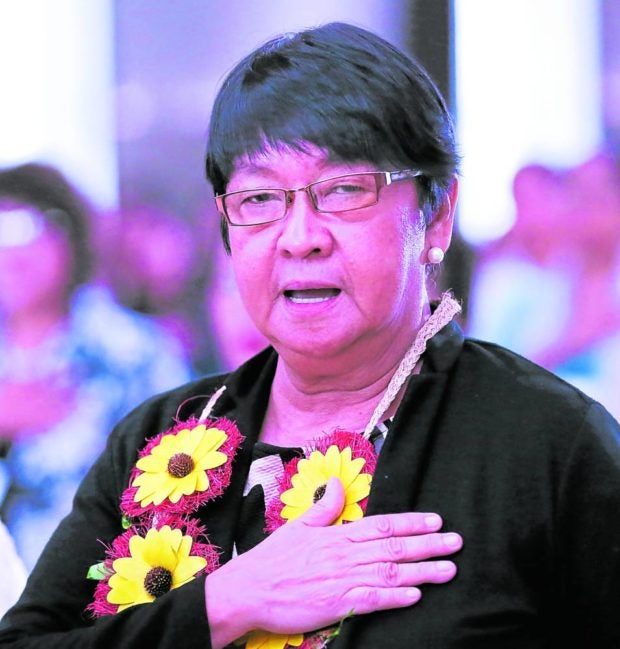 Who can forget what happened during Ferdinand Marcos’ dictatorship? When scores of Filipinos were arrested, made to disappear, or killed? When many who were accused of trying to overthrow the government, male or female, suffered the unspeakable in the hands of the police and military? The survivors thought the 1986 Edsa People Power Revolution was their triumph over the dictator. But 36 years later, his son and namesake is leading the surveys for presidential candidates, as though the horrors that the survivors experienced had vanished from the national memory, as though their pursuit of justice had been for naught.

These are the stories of Judy Taguiwalo, Carmencita Mendoza Florentino, Ofelia Beltran Balleta and Rosemarie Lomocso—women who dared resist the darkness of martial law and were made to pay for it, and who stand even now against a Marcos resurgence. Balleta spoke for her father, the late labor leader and party list lawmaker Crispin Beltran.

A social worker and activist, Taguiwalo is among the most prominent survivors of Marcos’ martial rule. She was detained twice—first in 1973 and then in 1984—over charges of subversion, during which she was physically and psychologically tortured by state agents.

The first time she was arrested, Taguiwalo, then a 22-year-old community organizer for women, was interrogated for two straight nights in Iloilo City. She was made to lie naked on a bench while her tormentors poured water into her nose (a torture method known as the “water cure”).

“They wanted to know who took care of us, and get additional information that could lead to more arrests, but of course I didn’t yield at all,” she said.

Even after her release in 1974, Taguiwalo continued to organize communities. “This was not just a question of simply ending the dictatorship, but [also] pursuing social justice,” she explained. “Even now, for example, we haven’t even fully realized our demands.”

The second time she was arrested, in 1984, she was pregnant. She was brought to Camp Olivas in San Fernando, Pampanga, where she was “psychologically tortured”—forced to listen and read stories about people who were killed or made to disappear because they refused to cooperate with authorities. But even then, Taguiwalo sensed that the tide was turning. Only in 1983, the opposition leader Benigno “Ninoy” Aquino Jr., was assassinated on disembarking from a plane that took him to Manila from exile. “Even the officers who brought us [to Camp Olivas] knew it was only a matter of time before the beginning of the end,” she recalled.

After the 1986 Edsa People Power Revolution, the country was “euphoric,” Taguiwalo said. At the time, it was difficult to imagine a Marcos comeback “when [the family was] so humiliated…” she noted. But “in the years that followed, there was no serious effort of prosecuting the Marcoses. We failed in securing justice and memorializing the martial law atrocities.

“And because the promise of Edsa was not fully realized, the Marcoses were able to use this to say that ‘the country is not better after their rule,’” she said.

It was only in 2016—when Ferdinand Marcos Jr. came close to winning the vice presidency and the dictator’s heirs were able to bury his remains at the Libingan ng mga Bayani—that Taguiwalo felt the full threat of a Marcos resurgence.

With Marcos Jr. leading his rivals for the presidency, Taguiwalo is indignant: “If he wins, we will be the laughing stock of the entire world … It’s like we’re asking the son of Hitler to be elected into office in spite of the Holocaust.”

When Marcos declared martial law in 1972, Florentino was the head of a community association of mothers called Samahan ng mga Nanay in Barangay Tatalon, Quezon City. At that time, their homes were being demolished by the Araneta family, which regarded them as squatters on its property.

The men of Tatalon initially led the resistance against the demolitions. The ensuing wave of arrests pushed Florentino and the other women to organize themselves. In June 1977, “at least 500 Marines” descended on Tatalon “as if we were in a war,” Florentino recalled, and arrested the association leaders, including herself.

“They took everyone—the leaders, the husbands, the children, even pregnant women,” she told the Inquirer. “They accused us of being subversive, but we didn’t even know what that was. We had no arms, just pens.” Florentino was taken to Camp Crame in Quezon City, and her husband, Ernesto, and their 9-year-old daughter to the detention center in Bicutan, Taguig. While in detention, she said, an officer would slam a .45-caliber pistol on the table and repeatedly order her to confess to subversive activities.

From the other room she could hear her godchild being water-cured to force him to admit that she, Florentino, was inciting the other residents to rebel. The stress and trauma made her cough up blood.

For years, Florentino felt she was as good as dead. “That’s why we do not owe Marcos anything,” she said. “It’s hard to put into words what it was like living during that time.”

Balleta was in grade school when Marcos imposed martial law in 1972.

Her childhood was suffused with fear. Her father, the late labor leader Crispin Beltran known widely as “Ka Bel,” often warned her against going out. “It was always tense around our home because he was already in Malacañang’s crosshairs,” she said.

In 1982, father and daughter were among those rounded up by police for their work in the labor unions. Balleta, then pregnant, was the first to be arrested during the so-called labor crackdowns across Manila: a wave of raids on union offices and organizations.

While waiting along with the others in Camp Crame to be cleared, Balleta recalled, she noticed that a police officer’s zipper was down and casually told him so. Enraged, the man smacked her head.

She was eventually released the same day as her name was not on the arrest, search and seizure orders. Police were looking for her father.

Dismayed by the crackdowns, Ka Bel surfaced at a press conference in Manila, from which police promptly dragged him away.

He was held incommunicado for months and subjected to physical and mental torture, Balleta said. Police interrogated him nonstop and allowed him only two hours of sleep. He managed to escape in 1984 and went into hiding, but police came to the family home and beat his wife, Balleta’s mother, demanding to know where he was. The 1986 Edsa People Power Revolution was for Balleta a glimmer of hope: “It was such a nice feeling to be around millions of people who were once afraid to step out of their homes. And then to walk beside the same state agents who had accused my father of being a criminal, now coming out in the open to express their disgust at Marcos…”

Now, as Marcos Jr. guns for the presidency, Balleta cannot help but compare their lives. “I am the daughter of a labor leader who fought for workers; he is the son of a thief who repressed people’s rights,” she said. “I know in my heart that there are more people angry at him than at us, who had only served the people.”

When most 17-year-olds were concerned with school or first loves, Lomocso was at the picket lines in Tondo, Manila.

She was a student at Jose Abad Santos High School and already a member of the Zone One Tondo Organization (Zoto) that resisted the demolition of her neighborhood’s shanties.

It was her mother, then the Zoto vice president, “who roused our consciousness at an early age about our conditions in Tondo,” Lomocso recalled. “She taught us why it was important to fight for our rights.”

The day she was arrested, she and her mother, along with other residents, had been protesting at Intramuros, Manila. The police came and charged them with illegal assembly. Everyone was taken, she said: “Talagang walang pinili, nilimas kami lahat.” At Fort Bonifacio, the others were released. Lomocso was held because her name was on a leaflet.

Her detention took only 10 days but it felt like hell. “They crammed us all in filthy cells and the food was inedible,” she said. But the worst was the “devil” policewomen, who practically hazed the newbies.

“They kept shouting profanities at us, telling us ‘Your vaginas smell like shit,’ ‘You useless bitches’… [They] treated us like we weren’t human,” she said.

While the 1986 Edsa People Power Revolution was like a fresh start for Lomocso, learning now of Marcos Jr.’s attempt to reclaim Malacañang felt like her wounds were being reopened, she said.

“Even my lungs cry out when I hear his name,” she declared. “I still cannot forgive him for what happened to me.”