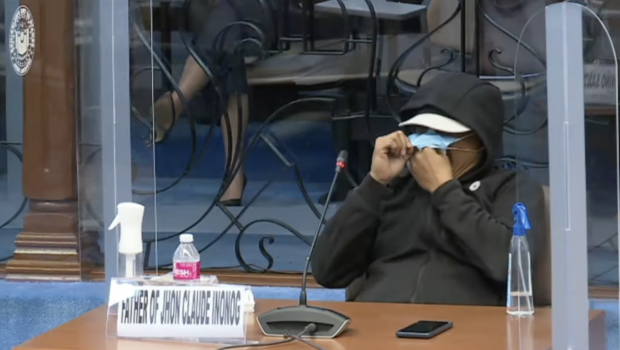 MANILA, Philippines — The parents of some of the 31 missing men involved in cockfighting turned emotional during a Senate inquiry on Thursday, decrying authorities’ failure to solve the disappearances and locate their missing loved ones.

At the hearing of the Senate public order and dangerous drugs committee, Butch Inonog, father of John Claude Inonog, said he last spoke to his son at around 7:45 p.m. last Jan. 13.

John disappeared with five others. They were last seen on Jan. 13 at the Manila Arena.

He said John told him a companion was being boarded on a van.

When Butch asked John what the problem was, his son said he did not know.

Butch also clarified that his son is not a cockfight player but was merely hired to arrange vehicles to be used by players.

“Hindi po yan nagsasabong [He is not a cockfight player],” he added.

At this point, Butch’s voice choked as he tried to hold back tears.

“Anong kasalanan nila? [What did they do?] ” he asked. “Nakakaawa po yung mga bata [I feel bad for these kids].”

Merlyn Gomez, the mother of Rowel Gomez, said his son told her he would go to the cockpit arena.

(He told me ‘Ma, I will engage in cockfighting so we can pay for the hospital.’ Because my other child is admitted to a hospital.)

She said they could not afford to pay their hospital bill.

(I told my son not to go and said that we can just write a promissory letter.)

Merlyn then broke down into tears as she called on the Senate committee’s chairman, Senator Ronald “Bato” dela Rosa, to tighten their investigation into the disappearances of their sons. 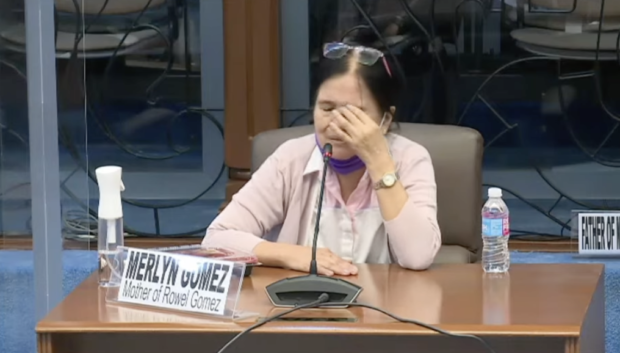 Merlyn Gomez, the mother of Rowel Gomez, during a hearing of the Senate public order and dangerous drugs committee on Thursday, Feb. 24, 2022. Senate screengrab

(Because since this happened, our lives have not been normal. We are nervous, we feel scared and we are concerned for our loved ones.)

Meanwhile, Isabelita Baccay also turned emotional when she talked about her sons, Marlon and James. 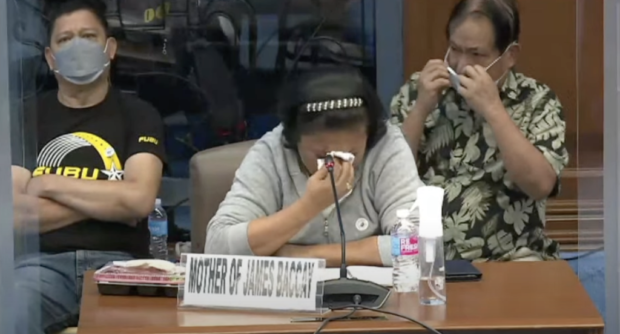 “Ano po bang kasalanan? Anong nangyari? Sino kumuha? Saan dinala? Anong ginawa nila hanggang ngayon ‘di namin alam [What did they do? What happened? Where are they? What is happening to them right now, we don’t know],” she said.

She also urged cockfighting operators to cooperate with the investigation.