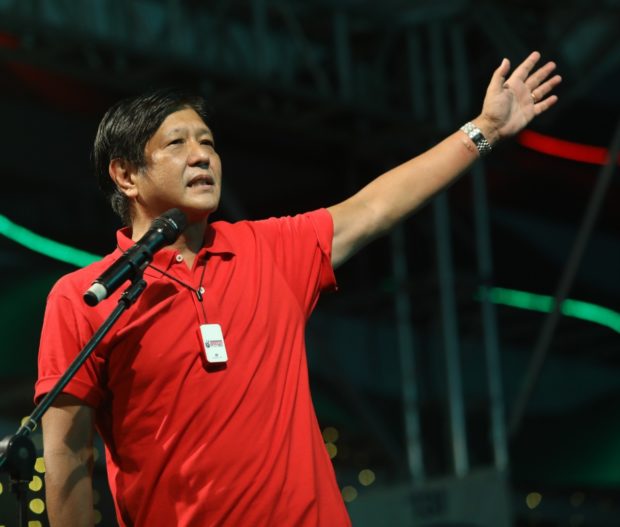 In a meeting with the Trade Union Congress of the Philippines (TUCP) and the Associated Labor Unions, Marcos assured labor groups of better labor conditions should he become president.

In a press statement on Wednesday, the Marcos camp said he had “expressed interest in making into a priority bill the Security of Tenure Act” to ensure the protection of workers’ rights.

In 2019, President Rodrigo Duterte vetoed a bill, one of his campaign promises when he ran for president in 2016, because the bill supposedly broadened the scope of labor-only contracting.

“We need to thoroughly study how to amend it so that it will really give protection to our workers, and it passes into law,” he said in a statement on Wednesday.

He said the government needed to address the issue of contractualization so that Filipinos would not be forced to work abroad due to poor labor conditions in the country. Marcos did not detail the version of the “endo” (short for “end of contract”) bill he wanted Congress to enact.

In a radio dzRH interview on Jan. 25, he said he would talk to owners of big corporations, some of whom, he said, are his “friends,” to address the problem of contractualization.

The son and namesake of the late Philippine dictator also said he supported the newly created Department of Migrant Workers, which Duterte signed into law in December last year, but said there was a need to streamline all the other agencies that deal with the labor sector.

“We need to streamline the agencies because there are already too many offices. Our workers are now confused where to go,” he said.

Read Next
Isko Moreno seeks reforms via charter change
EDITORS' PICK
Geek out at TOYCON 2022 powered by Smart Signature
Unemployment rate up to 6% in May
Bye bye Boris: UK PM Johnson bows out with regrets but no apologies
House energy committee chair Arroyo bats for cheap electricity
High inflation: Your P1 is now worth only 87 centavos
High-risk pregnancy: Reducing your risk is in your hands
MOST READ
Suspect in grisly killing of missing woman in Bulacan arrested
Kim Atienza’s daughter flaunts bikini body in response to critics of her ‘revealing photos’
Bongbong Marcos’ first order: Abolish PACC, Office of Cabinet Secretary
Ex-Defense chief Lorenzana is the new BCDA chair
Don't miss out on the latest news and information.