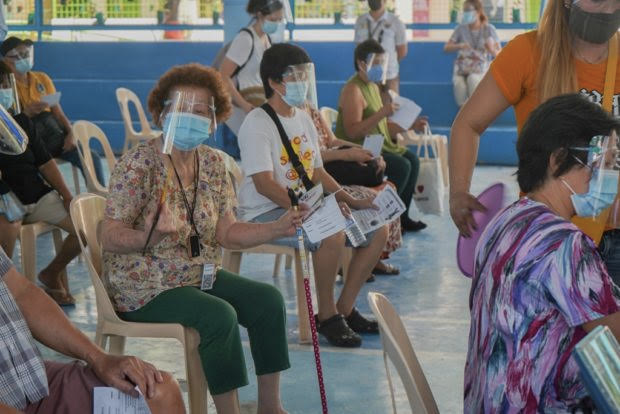 Local governments must ensure that at least 80 percent of senior citizens and that 70 percent of the eligible population in their communities have been fully vaccinated against COVID-19 before they can transition to Alert Level 1.

“If (LGUs) cannot achieve all these metrics, then we cannot let them be placed under alert level 1,” Duque said, noting that the suggestion came from NTF deputy chief implementer and testing czar Secretary Vince Dizon.

“This is a good metric to be added in our assessments in which areas are ready for alert level 1,” he added.

Alert level 1 means all establishments will be allowed to operate at full capacity while minimum public health standards such as the wearing of face masks must still be enforced.

Galvez described the additional metric as the government’s “way forward.”

“We will add this requirement to incentivize LGUs with higher vaccine coverage, so they could also be under alert level 1, just like in the NCR (National Capital Region),” Galvez added.

All LGUs in Metro Manila have vaccinated at least 70 percent of their target population, but no figures were available as to their coverage of senior residents.

All the 17 mayors of Metro Manila agreed during their meeting on Tuesday night to recommend to the government’s pandemic task force to place NCR under alert level 1 starting March 1, the Metropolitan Manila Development Authority (MMDA) said on Wednesday.

Based on Galvez’s presentation, more than 62.5 million or 56.7 percent of the country’s population have been fully vaccinated.

Booster administration has also been slow at only 9.7 million, despite shortening the interval to get booster jabs to one month after getting fully vaccinated due to the emergence of infectious COVID-19 variants.

Galvez said the country has already reached the “saturation point or inflection point” of its vaccine coverage, making it more difficult for unvaccinated individuals to get their COVID-19 jabs.

“From vaccination centers, we now need to go from barangay to barangay and house to house to increase our daily output,” he noted, adding that February’s daily vaccination rate has not reached 500,000, far from January’s one million average a day.

According to Galvez, the national government will focus on the remaining three million senior citizens and people with comorbidities who remain unvaccinated.

The Department of Health (DOH) and the National Vaccination Operations Center deployed focal persons per region for LGUs to comply with the goal of vaccinating at least 70 percent of their population.

The presidents of the Philippine College of Physicians (PCP) and the Private Hospitals Association of the Philippines Inc. (Phapi) said they foresaw problems if the shift would be done prematurely.

“We hope the LGUs have made the necessary preparations to ensure that everyone will be safe. If the LGUs are ill-prepared, it’s best to delay downgrading the alert level,” said PCP president Dr. Maricar Limpin.

Phapi president Dr. Jose de Grano said the planned lifting of restrictions while the campaign period was in full swing was “indeed worrisome.”

Government vaccine advisers also urged the public to get their booster shots to protect against any new infectious COVID-19 variants that might emerge.

“But if you provide a booster or a third dose, that’s already sufficient to provide protection against Omicron. That’s how important booster shots are,” Jiz said in a briefing organized by the DOH.

It also reported 201 more deaths, of which 69 occurred in February, 118 occurred last January and the rest were from September to December last year.

Out of the 24,527 individuals who were tested last Feb. 21, 6.1 percent were positive for the virus, the lowest positivity rate since Dec. 27, shortly before the Omicron-fueled surge started.

Active cases also fell to 55,449, the lowest since Jan. 5. Nearly 92 percent of them were mild or asymptomatic.