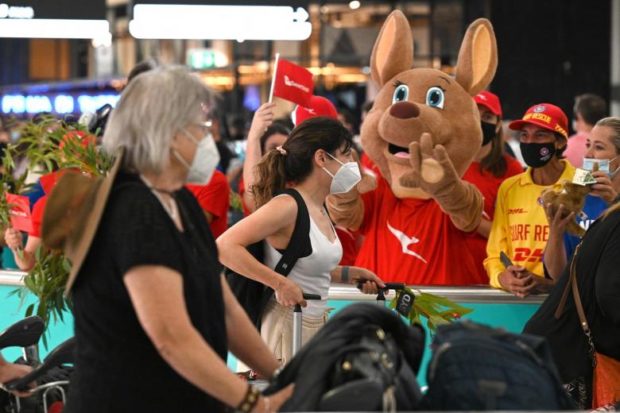 A mascot welcomes passengers upon arrival at the Sydney International Airport on Feb 21, 2022. PHOTO: AFP

SYDNEY – At 6:20 am on Monday (Feb 21), a flight from Los Angeles touched down in Sydney, allowing a planeload of passengers to disembark and – to their surprise – be greeted by crews of local media keen to record the historic event.

The flight was the first to arrive in Sydney after Australia finally lifted border restrictions that have left the country cut off from the world for almost two years.

The decision to again allow all foreign travelers to enter is set to deliver a much-needed boost to the tourism and university sectors, which have been hit hard by the border closures to stem the spread of Covid-19.

But the biggest smiles at Sydney airport on Monday were on the faces of countless family members who were finally being reunited after months or years apart.

Ms Cindy Moss, who lives in the United States, greeted her daughter, a veterinary nurse who has been living in rural Australia for the past two years.

“I can’t tell you how much it means to hug my daughter after all this time,” Ms Moss told The Sydney Morning Herald.

But these emotional reunions also highlighted some of the remaining challenges for Australia’s international tourism sector, which generated more than A$41.5 billion (S$40.2 billion) in annual spending before the pandemic, but just A$800 million in the year to March 2021.

As at Monday, all fully vaccinated international travelers who hold visas can enter Australia without needing to quarantine. But the state of Western Australia will remain closed until March 3.

Universities expressed delight at the border reopening, which has allowed all foreign students to arrive just in time for the start of the new academic year.

A 26-year-old postgraduate architecture student from India, Mr Calvin Fernando, said he was supposed to arrive in Melbourne to start studying at RMIT University in March last year.

Instead, he spent the year in India waking up at 4.30am to attend online lectures and to chat with fellow students. He finally landed in Melbourne in late December and was eventually able to visit the campus.

“It was surreal to see all those people, all those restaurants, all those different architectural buildings,” he was quoted as saying in The Age newspaper.

Australia has already been allowing visitors from New Zealand, Singapore, South Korea and Japan, but the opening on Monday applies to all nationalities. Visitors must take Covid-19 tests before arriving.

Most of Australia is currently emerging from a serious outbreak of the Omicron strain of the coronavirus.

More than 93 per cent of Australians above 12 years old have had two or more vaccine doses.

But some analysts have warned against anticipating a flood of foreign tourists in the near term, saying that they may be put off by Australia’s history of sudden border closures and the mix of confusing rules that can vary by state.

Another major hurdle for the tourism and education sectors is that their biggest source of revenue – Chinese visitors – is still unlikely to travel in large numbers due to China’s border closures.

The tourism sector has complained that the border restrictions have led to severe staff shortages. The return of students and backpackers to fill hospitality and retail jobs is expected to help, but businesses such as hotels and tour operators may not immediately be able to reopen at full capacity.

Mr Michael Betteridge, who manages Fantasea Cruising, which offers cruises around Sydney harbour, said he was delighted to learn that a recent harbour cruise was filled with British tourists.

He said the firm, which closed during lockdowns, plans to “scale up” its capacity over the coming year.

“I’m so excited to be able to welcome people back and it’s great to see people already starting to trickle through,” he told ABC News.

“We’re all looking at how we attract people back into the industry.”

Australia to push ahead with reopening amid record COVID-19 cases