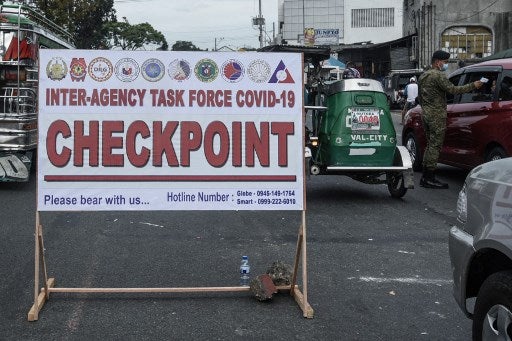 A checkpoint signage has been put up for motorists entering Manila in this photo taken on March 16, 2020, as part of measures to reduce the spread of the COVID-19 pandemic. AFP file photo

MANILA, Philippines — At least four mayors in Metro Manila, including the chairperson of Metro Manila Council (MMC), will vote to downgrade the alert level status in the metropolis to Alert Level 1.

“Parañaque recommendation [is] alert level 1 starting March 1,” Olivarez told INQUIRER.net in a text message when asked for his vote.

In a separate phone interview, Zamora told INQUIRER.net that he will vote for  Alert Level 1 in Metro Manila since San Juan has already managed to control the spread of COVID-19 with the city’s high vaccination rate.

“We could sustain the low cases especially since there is no variant of concern being monitored here and in other countries for now. I could foresee a low number of cases in Metro Manila in weeks and months to come,” he said.

Zamora also revealed over ABS-CBN News Channel that he “will vote for alert level 1 once the votation is asked for tonight.”

Meanwhile, Tiangco said in a text message to INQUIRER.net that he intends to vote for Alert Level 1, but did not further elaborate.

Fresnedi will also vote for the Alert Level 1, according to city government spokesperson Tez Navarro.

“Same with San Juan,” Navarro told INQUIRER.net when asked about his vote on the issue.

Pressed if Fresnedi will vote to downgrade Metro Manila’s alert level, his spokesperson answered: “Yes, [that is] what he told me.”

The MMC, composed of 17 mayors in Metro Manila, will have a meeting on Tuesday night to discuss the capital region’s alert level status.

Metro Manila is under COVID-19 Alert Level 2 until February 28.

Some health experts and the business sector are one in saying that the alert level in Metro Manila should be downgraded to Alert Level 1.