Miriam Santiago ‘worthy of the fires of hell’ 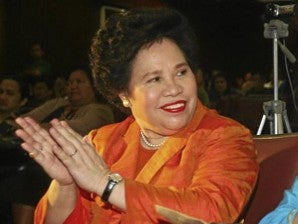 She may be untouchable in the impeachment court. But in the eyes of God, Senator-Judge Miriam Defensor-Santiago could be “worthy of the fires of hell.”

In a blunt admonition of the feisty lawmaker, Fr. Catalino Arevalo, spiritual adviser of the late President Corazon Aquino, said Santiago should issue a public apology for repeatedly berating the House prosecutors in the impeachment trial of Chief Justice Renato Corona.

“If you call anybody ‘you fool,’ you are worthy of the fires of hell.  And she called them gago, which is Filipino for fool, before millions of people,” Arevalo said in his homily at the historic Our Lady of Edsa Shrine yesterday during the First Saturday Mass in honor of the Blessed Mother.

“I did not say that. Jesus said that,” said Arevalo, the octogenarian Jesuit who delivered the homily at Aquino’s funeral mass in 2009.

Arevalo did not mention Santiago by name in the homily. But later when asked if he was referring to Senator Santiago, Fr. Arevalo’s telling pause was clear. He did not have to name her.

“That’s the teaching of Jesus. You don’t do that, and if you do that, you have to retract it by making a formal apology before millions of people, otherwise you remain worthy of the fires of hell,” he stressed.

Known for her sharp tongue and fiery temper, Santiago once again lashed at the House prosecution panel on Wednesday over its supposed incompetence and poor grasp of procedures in the impeachment trial.

This time, however, she was finally met with mocking defiance from a private lawyer helping the panel, Vitaliano Aguirre, who was caught on camera covering his ears as Santiago went on for minutes berating his team.

When asked to explain, Aguirre admitted doing it on purpose to protest being called gago on national TV by the senator while shutting out her “shrill voice.” The lawyer later resigned from the panel after the court cited him for contempt.

Santiago’s tirades on Day 26 of the trial arose from the prosecution’s sudden decision to rest its case against Corona after withdrawing five of the eight articles of impeachment it had prepared against the Chief Justice.

With the ball now in the court of Corona’s defense team, a congressman yesterday said the chief magistrate’s lawyers should stop engaging in word games and finally prove that their client’s wealth was not ill-gotten.

Akbayan party-list Representative Walden Bello posed the challenge after Ramon Esguerra, one of defense counsels, assailed his move of filing before the Office of the Ombudsman a P78-million forfeiture case against Corona with the impeachment trial still ongoing.

He said Esguerra, a former criminal law professor at the University of the Philippines, as well as his fellow counsels “should stop issuing absurd interpretations of jurisprudence,” Bello said.

“It’s time they face the forfeiture case head on and prove beyond doubt that their principal had indeed lawfully acquired the assets in question,” he said.

“I am sure even Chief Justice Corona is disappointed that Attorney Esguerra overlooked the 2005 Supreme Court decision that reinforces the Ombudsman’s responsibility to investigate and file forfeiture proceedings, which Corona concurred in as associate justice,” Bello said.

On criticisms that he was engaging in forum shopping, Bello argued that initiating forfeiture proceedings was independent of the impeachment process. “(It is) not only a matter of the people seeking justice for Corona’s abuses but also an issue of urgency,” he stressed.

“Forfeiture can proceed independently of impeachment because it’s sole object is the confiscation of unlawfully acquired property. It has no effect whatsoever on Corona’s continued fitness to stay in public office, which is the sole concern in the impeachment,” Bello explained.  With a report from Cynthia D. Balana